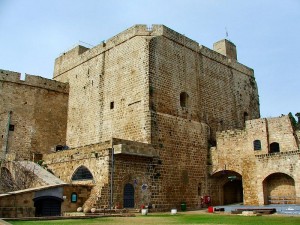 The city of Akko, or Acre as it was called by the Crusaders, was one of the most important and militarily strategic cities in the world for the better part of two hundred years.  Christian warriors from Europe poured into this citadel on their way to do battle with the armies of Islam.  It was from here that Hospitalers, Templars, Teutonic Knights and others rode forth to defend the Crusader kingdoms in the Holy Land; and it was here, in Akko, where the crusaders made their last stand in Palestine.  During the Christian occupation of Israel, the majority of pilgrims visiting from Europe also passed through Akko enroute to Jerusalem.  Today the still-formidable looking city remains a symbol of the act of pilgrimage.  The Old City of Acre is a UNESCO World Heritage Site.

Akko is an ancient port city that may date as far back as four thousand years.  At the time of the arrival of the Israelites, Akko had already had a long and often violent history, witnessing centuries of warfare between Egyptians, Hittites, Canaanites and others.  Because of its strategic location and well-defended position that could be easily supplied by sea, Akko was one of the few Phoenician cities never occupied by the Israelites.  Nevertheless its inhabitants were frequently involved with ancient Israel’s wars, particularly during the Assyrian and Babylonian conquests.  By the time the Persians arrived, Akko was a solidly Syrian city, and was usually annexed to the Syrian province of whatever contemporary empire controlled the region at any given time.

Although militarily strategic, Akko was never outstanding as a port, and was commercially overshadowed by virtually every other coastal city in the Levant, from Joppa in the south to Sidon in the north.  So as it changed hands from the Persians to the Greeks to the Seleucids to the Romans to the Byzantines, Akko was never much more than a provincial town or military garrison.  As Islam swept across Palestine in the 7th century, Akko came under the dominion of the Ummayad and later Abbasid dynasties.  But it would be another five hundred years before Akko would enter the world spotlight.

At the end of the 11th century, fear of the advancing Turkish armies in Anatolia reached a fever pitch in Europe, and the Church began sending waves of Christian soldiers to the Holy Land.  After a rapid advance from Constantinople, the First Crusade captured Antioch, and then worked its way down the coast towards Joppa and Jerusalem.  The Crusaders decided to make the more easily defensible Akko the chief port of the crusader states.  Within a few years, it was one of the most heavily fortified cities in the Middle East.  It also became the headquarters of the Hospitaller Knights.  Except for a brief period during Saladin’s reign, the Crusaders held the city from 1104 to 1291.  Although it did not begin as one of the original Crusader kingdom capitals, Akko grew in importance as the Muslims steadily advanced through the region, until it became the de-facto capital of the ever-shrinking Christian territory.  As the 13th century came to a close, the majority of Christian soldiers in the Holy Land had relocated to Akko.

The Mamluks retook Akko in 1291, after which the age of the Crusader kingdoms was essentially at an end.  Akko quickly reverted back to a state of obscurity, after which it passed to the control of a succession of Muslim dynasties.  It was eventually incorporated into the Ottoman Empire, who held it until the end of World War I, when it was occupied by Britain.  Since then, Akko has largely remained insulated from many of Israel’s problems, due in large part to its out-of-the-way geographic location.  For a while the British used the citadel to imprison Jewish dissidents.  After 1948, Akko became part of Israel, but with a significant Arab majority.  Of the predominantly Arab cities located within Israel proper, this is one of the least turbulent and most popular for tourists.

The imposing city of Akko appears much today as it might have at the height of the Crusades.  The towering citadel guards the entrance to the peninsula, while the city is hemmed in by its massive walls and the sea.  However, its medieval appearance is somewhat misleading.  While almost everything in Akko is built on the foundations of the original crusader structures, virtually nothing of that time is still here, except what is below ground. In fact, most of the city’s outer walls are only about two hundred years old, designed to withstand cannon fire.  The sea wall, which dates to the mid-18th century, is the oldest intact section and one of the finest naval fortifications in the Mediterranean.  The land side wall dates from the late 18th and early 19th centuries, and was completed just in time to stand off a siege by French troops during the Napoleanic wars.

The citadel is also relatively new, but incorporates much of the earlier crusader castle that once stood on the spot.  Large but somewhat plain in appearance, this blocky fortification is short on aesthetics but long on practicality from a defensive standpoint. The citadel, briefly used as a prison by occupying British forces, now houses a Museum of Heroism dedicated to those who fought for Israeli freedom in the early 20th century.  Also of interest is the Gallows Room, where executions once took place.

The city and walls of Akko are extremely scenic and walkable and easily done as a daytrip from Haifa a little more than ten miles away.  The walls of Akko are for the most part an open site.  It is open Saturdays through Thursdays from 9:00am-4:00pm and Fridays from 9:00am-1:00pm.  The cost of admission is NIS6.00.  Web: www.akko.org.il (official tourism website of Acre).

While Akko was the chief coastal citadel and seaport of the crusaders states, the Christians did maintain other similar fortresses up and down the coast.  A Crusader Fortress can still be found to the south in Caesarea.  The nearby Montfort Crusader Castle and Judin Fortress are also legacies of the knightly crusading orders.  Sidon, in Tyre, also boasts several crusader sites in various states of repair, including the Sea Castle and the Castle of St. Louis.