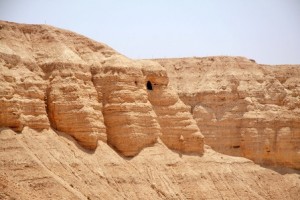 In 1947, a Beduoin shepherd seeking some stray sheep accidentally stumbled upon one of the greatest archaeological discoveries of all time: a series of caves containing an astonishing collection of ancient scrolls, including some of the earliest known editions of several books of the Hebrew Bible.  These writings, now collectively known as the Dead Sea Scrolls, are among the most important surviving documents of early Judaism, and have become immensely valuable to both Jewish and Christian religious scholars of the modern age.  Qumran, where the Dead Sea Scrolls archaeological site is located, has drawn hordes of archaeologists, historians, scientists and the curious ever since.

The history of Qumran and the Dead Sea Scrolls is closely bound to the early Jewish sect known as the Essenes.  The origins of this mysterious group of religious ascetics are shrouded in myth.  Some scholars have theorized that the Essenes may have existed as early as the Assyrian or Babylonian captivities, though archaeological and historical evidence suggests that they were formed much later.  Either way, the Essene sect seems to have formed as a rejection of the corrupt practices of Judea’s official religious leaders, in particular the Sanhedrin priests.

Evincing a lifestyle reminiscent of later Christian monastic orders, the Essenes espoused communal living and kindness to their fellow men as being more important than strict obeyance to the often senseless laws and customs enforced by the Sanhedrin.  They rejected such practices as slave ownership and animal sacrifice.  It is unknown if their beliefs put them at serious odds with the religious leaders of the day, but in all likelihood, it did.  It is possibly for this reason that the majority of the Essenes lived in small, isolated villages near the shore of the Dead Sea.  The most famous of these was the settlement at Qumran.

The Essenes were apparently most active during the 1st century BC and the 1st century AD.  It has been argued that John the Baptist was a devotee of this sect.  It is not a stretch to assume that the beliefs and practices of the Essenes had a profound influence on the foundation of Christianity.  The sect died out in the 2nd century AD possibly because its members were absorbed into the early Christian church.  More likely they were simply driven out or broken up by the Roman authorities after the Jewish revolts.

Despite being prominently mentioned by writers of the day such as Flavius Josephus, the Essenes were largely forgotten by the end of the Byzantine period.  They might have remained forgotten if not for the curious discovery of a vast cache of scrolls in the area around Qumran, the traditional home of the Essenes.  Scholarly investigations have led to the conclusion that these ‘Dead Sea Scrolls’ were once part of the Essenes’ collection.  These writings have since proved immensely helpful for religious scholars in understanding the development of the Hebrew Bible.  Thus this little-known Jewish sect is responsible for providing the modern religious world with one of the most important archaeological finds of all time.

The Qumran archaeological site is located inside the Qumran National Park and includes the ruins of the old Essene settlement and the caves where the Dead Sea Scrolls were found.  Excavations of the ruins have uncovered the remains of homes, a library, and buildings where pottery was manufactured.  There are also quite a number of cisterns and baths used for the frequent ritual cleansings with which the Essenes were apparently obsessed.

The cliffs around the settlement are riddled with caves.  To date, scrolls and other ancient artifacts have been found in eleven different locations.  The most important one was cave four, which was found to have well over a hundred Old Testament scrolls among other writings.  Cave six is the most accessible and thus the most visited.

Qumram is located in the West Bank, twenty-five miles due west of Jerusalem on the shore of the Dead Sea.  The Qumram caves are operated by the Israeli Park Service, and though it is an open site, access to the area is through a main visitors center.  Qumram is open April through September from 8:00am-5:00pm; and October through March from 8:00am-4:00pm.  Admission cost is NIS18 for adults.  Web: www.goisrael.com (official tourism website of Israel)

The Dead Sea Scrolls have long since been removed to other locations for translation, preservation and study.  The majority of the collection is now housed in the Shrine of the Book in the Israel Museum in Jerusalem.  Only a small selection of the collection is on display at any given time.  Other museums around the world display part of the collection as well, including the Archaeological Museum in Amman, Jordan and the Jewish Museum in New York City.