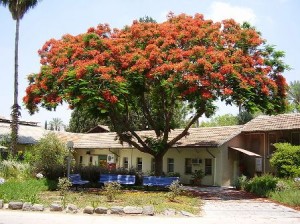 The settlement of Dagania Alef near the southern shore of the Sea of Galilee was the first of one of modern Israel’s great institutions: the Kibbutz.  Founded in the early 20th century by Jewish settlers who wished to work the land as farmers, it became famous as a successful commune which was later emulated by many similar communities around Israel.  For much of the 20th century, the outsider’s idea of Jewish life in Israel was indelibly tied to the idea of life on a Kibbutz.  Today the settlement of Degania Alef, and its neighbor Degania Bet, are cultural treasures of Israel and models of the idea of communal living.  However, those who wish to experience communal life on a Kibbutz should do so soon; ironically, many kibbutzes, including Degania Alef, are beginning to privatize.

The Zionist movement of Europe saw its first practical expression in the form of immigration of Jews to Palestine from Russia at the end of the 19th century.  This first wave, or Aliyah, of approximately thirty-five thousand settlers arrived between 1882 and 1903.  Most of these settled around the area of Jaffa and what would later be Tel Aviv.  Rishon LeZion would later come to prominence as the first such settlement of Russian Jewish immigrants.

In 1904, a second Aliyah of immigration from Eastern Europe began, and by 1914 forty-thousand more Jews had arrived in Palestine.  This next group of settlers counted amongst its ranks many fugitives and idealists who had developed revolutionary ideas in the restless population centers of Eastern Europe.  Some of these left Russia for their own safety, having incurred the wrath of the authorities.  Others, however, simply sought a place where they could start over and put their ideas into practice.

Many of the new arrivals in Palestine also had a new dream: to get back to the land and work the soil as farmers.  They had had enough of being temporary residents in foreign nations.  They wanted to make Palestine their own, and that meant taking ownership of the land as farmers like nationalists everywhere else in the world did.  But when they arrived at the existing settlements around Jaffa, they were surprised to find the same old situation: a peasant class of Arab farmers and Jewish financiers, scholars and so on.  So in 1909 some new, unsettled land was acquired near the Sea of Galilee, and within two years a workers commune had been established on the site.  Thus was born Israel’s first Kibbutz: Degania Alef.  It was followed a few years later by Degania Bet which was established close by.

The formation of Degania Alef was a milestone in modern Israeli history.  Throughout the rest of the 20th century, hundreds of similar settlements sprang up all over Israel.  Degania Alef frequently served as a training base for new workers.  It also played several minor roles in modern Israeli history.  Moshe Dayan, one of Israel’s most prominent ministers, was the second child born at Degania Alef.  Degania was also the location of modern Israel’s first significant military victory when its residents held off a superior force of Syrians in 1948.  While Kibbutz settlements have remained a staple of life in Israel, many have begun to shed their socialist models and have begun to privatize.  To many traditionalists, Degania Alef’s decision to privatize in 2007 signalled the end of an era.

In addition to being the first Kibbutz, Degania Alef is also one of the best examples of Kibbutz life, from the farms to homes to the communal facilities.  It is also something of a showpiece, with a number of sites of interest to visitors.  One of the highlights is the Pioneer’s Yard, a restoration of the original turn-of-the-century settlement.  The Pioneer’s Yard includes a small museum which details the history of the Degania Alef Kibbutz.

The settlement is also home to a number of gardens and memorials.  The Defender’s Garden commemorates those from Degania Alef who died in Israel’s various wars.  A Syrian tank, left in the spot where it was disabled in 1948, commemorates the settlement’s victory.  Also on the grounds of Degania Alef is a small zoo and an agriculture museum, the latter touted as the first museum built in modern Israel.

The Degania Alef Kibbutz is located on the southern shore of the Sea of Galilee in northern Israel, approximately seventy miles north of Jerusalem.  For many Jewish foreigners, visiting a Kibbutz is often synonymous with staying and working on a Kibbutz for a period of time, whether a few weeks, a summer or even longer.  Information for living and working on a Kibbutz can be found at www.kibbutz.org.il.  As of this writing, there was no visitor information available for Degania Alef.  Web: www.degania.org.il (official website)

There are nearly three hundred Kibbutzim in Israel, most of which fall under the organizational umbrella of the Kibbutz Movement.  Many welcome visitors and volunteers from around the world, and are frequently good bases for exploring some of Israel’s more out of the way sites.