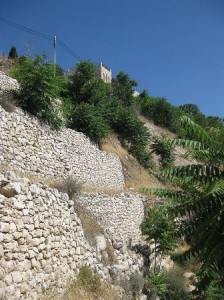 The city of Jerusalem is the most sacred place in Judaism.  It is impossible to overstate the religious importance of the place where the Great Temple of Israel once stood.  So great does Jerusalem loom in the memories of all of the descendents of Abraham that its sanctity extends deep into the Christian and Muslim faiths as well.  But it was first and foremost the city of the Israelites, the capital of the united kingdom of Israel and later of Judah, and the location of Solomon’s Temple, the place where God himself resided among the people, and where he will return at the end of days.  Little now remains of that ancient time, but there are a few architectural bits here and there that recall the days of ancient Judah’s glory.  The Old City of Jerusalem is a prospective UNESCO World Heritage Site.

The first known inhabitants of Mount Moriah, the hill upon which Jerusalem was built, were the Jebusites, a powerful Canaanite tribe that survived the initial onslaught of the Israelites during the days of Joshua and the Judges.  For over three centuries, the Jebusites held their main fortress on the neighboring Mount Zion against all enemies, including the Israelite tribes, the Philistines and other Canaanites.  It was perhaps due to this tenacity that the Israelites thought there was something sacred about the place.  The area was finally conquered in the early days of the reign of King David, who subsequently chose the location for the establishment of his new capital city.

The choice was both a selfish and a diplomatic one.  At the time Jerusalem was not a significant religious center such as Shiloh, where the Tabernacle and Ark had been kept; Gilgal, where the first altar was built and where Saul had been coronated; or Hebron, where the Tomb of the Patriarchs was located.  Moreover, David’s hometown was Bethlehem, another logical choice.  But he passed over all of these options in favor of Jerusalem.  Patriotism and tribal devotion kept the capital inside the territory of Judah.  Diplomacy kept the capital as close to the center of the kingdom, and the border with Ephraim, as possible.

David spent much energy and wealth during his reign building up Jerusalem.  In addition to his palace on Mount Zion, he established a shrine with an altar on Mount Moriah.  He also strengthened the city’s fortifications, including the construction of a new wall.  Jerusalem reached the peak of its ancient glory during the reign of David’s son Solomon, at which time the united realm of Israel reached its greatest height.  Solomon rebuilt Jerusalem with tax proceeds from the vast amounts of trade wealth that was then flowing into the country.  His legacy included a substantial expansion of the royal enclave on Mount Zion; public works and infrastructure in Ophel, that part of the Jerusalem which stood between Zion and Moriah; and of course the First Temple on Mount Moriah itself.

Though the united kingdom ended shortly after Solomon’s death, Jerusalem remained the capital of the southern realm of Judah, which incorporated the tribal lands of Judah, Simeon, Benjamin and some of the Levitical cities.  However, because of the presence of the Ark of the Covenant and the Temple, it remained the spiritual capital of all twelve tribes.  Jerusalem was the center of Judah’s pride and power for a further four centuries.  But early in the 6th century BC the city was conquered by the Babylonians.  A brief attempt liberate Jerusalem resulted in much of the city’s destruction, including the loss of Solomon’s Temple.  The temple treasures were taken to Babylon, and the people of the city were sent into exile.  The Ark of the Covenant disappeared.  With the beginning of the Babylonian Captivity, the first stage of Jerusalem’s history was over.

The city of Jerusalem has been destroyed and rebuilt too many times to count, and because of this virtually nothing remains of the original city of David’s and Solomon’s reigns.  Although the site where the Great Temple once stood is still well known, all of the remains, including the Western Wall, date from the Herodian period.  Nevertheless, a detailed description of the Great Temple of Solomon survives in the Biblical books of Kings and Chronicles.

What little remains of the First Temple period can be found in the Old City’s Jewish Quarter.  The most important surviving architectural remnants probably date from the reign of King Hezekiah.  These include the Broad Wall and the Israelite Tower, both of which were part of the city’s earliest defensive system.  The history of ancient Jerusalem is presented at the Center for Jerusalem in the First Temple Period, also located in the Jewish Quarter.

The Israelite Tower and Broad Wall are both close to many of Jerusalem’s other historic sites and are easily reached on foot or by public transportation.  The Israelite Tower is open Sundays through Thursdays from 9:00am-5:00pm, and Fridays 9:00am-1:00pm.  Admission is NIS4.  Web: www.goisrael.com (official tourism website of Israel)

Many of the existing sites dating from the First Temple period are covered in the section on the City of David.  Besides those already mentioned, the Kidron Valley east of Jerusalem is also home to Solomon’s Quarry, the source of much of early Jerusalem’s building materials.  Despite its name, King Solomon’s Stables on the Temple Mount has no relation to the First Temple period whatsoever.