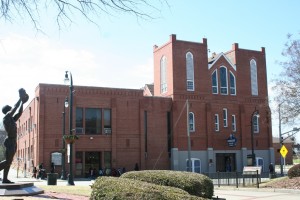 Ebenezer Baptist Church is regarded by many as the mother church of the Civil Rights movement and one of the most important and historical churches of the 20th century.  It is part of the Martin Luther King Jr. National Historic Site, which includes the King’s home and gravesite, as well as museums and memorials to civil rights movements around the world.  Because of Martin Luther King’s importance in the shaping of both race relations and Christianity in modern America, the places associated with his life are highly revered not just among Christians, but also among Jews, Hindus, Muslims and even Atheists.  His gravesite is the most visited of any religious leader in American history, and probably one of the most visited of any Protestant leader anywhere in the world.  Hundreds of thousands of pilgrims visit the Ebenezer Baptist Church every year to pay their respects to this most beloved of America’s ministers.

Martin Luther King Jr. was born in Atlanta, Georgia in 1929 on the eve of the Great Depression.  Although he had the good fortune to to be born the son of a minister in a relatively comfortable middle-class family, he also arrived in a world frought with economic hardships and terrible racial hatreds and violence that wracked many black communities across America, especially in the Deep South.  These difficulties, a lingering legacy of three centuries of slavery and another century of brutal prejudice, had a profound impact on King’s early life. 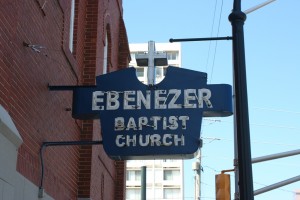 King followed in his father’s footsteps, and after a whirlwind education he had earned his PhD in Theology at the age of twenty-six.  He followed up with some pastoral work at the Ebenezer Baptist Church, but was soon deeply involved with the nascent civil rights movement.  In 1955 he was a key figure in the Montgomery bus boycott which followed the Rosa Parks affair and which would lead to the beginning of desegregation in the south.  In 1957 he helped to found the Southern Christian Leadership Conference, the first major Christian organization dedicated to the promotion of universal equal rights.

By the 1960s, Martin Luther King Jr. had established himself as one of the world’s most popular Christian leaders.  Over the next few years he would organize anti-segregation campaigns in Albany, Georgia; Birmingham and Selma, Alabama; and St. Augustine, Florida.  His triumphant moment came in 1963 during the famous March on Washington, when he delivered the I Have a Dream speech, one of the greatest oratories and sermons in history.  The following year he was awarded the Nobel Peace Prize. 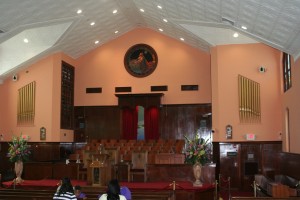 Unfortunately, like many of history’s greatest Christians, Martin Luther King Jr. died a martyr, the victim of an assassin’s bullet in Memphis, Tennessee in 1968.  His funeral was a major event, both in the African-American community and in America at large.  In some ways his death itself marked a turning point in the civil rights movement, for the worst of interracial violence seems to have subsided in the wake of his assassination.  King was laid to rest a few blocks from the Ebenezer Baptists Church, and his gravesite has grown into a major national monument.  It is arguably the most popular pilgrimage destination among African-American Christians, and one of America’s most revered sites.

The Martin Luther King Jr. National Memorial Site sprawls over several city blocks just east of downtown Atlanta.  It consists of two general sections, the first being the restored neighborhood along Auburn Avenue which is anchored by the Ebenezer Baptist Church on one end and the King Family Home at the other.  The elegant red-brick Ebenezer Baptist Church was completed in 1922 to serve the needs of the growing African-American community.  Both the King Family Home and the Ebenezer Baptist Church, along with a number of other local houses and business, have been preserved and/or restored to appear as they did at the beginning of the 20th century. 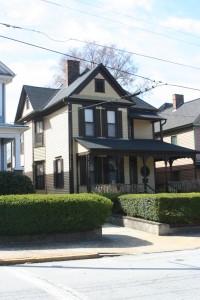 The other section consists of the modern memorial buildings, which features a civil rights museum, the King Center for Nonviolent Social Change, and the tomb of Martin Luther King Jr. and his wife Coretta Scott King.  The museum, run by the National Park Service, features a multitude of exhibits and artifacts on the life of Martin Luther King Jr. and the civil rights movement.  A walkway outside commemorates major figures of the civil rights movement.

Ebeneezer Baptist Church and the Martin Luther King Jr. National Memorial Site are fairly close to downtown Atlanta.  Because the memorial site is an open neighborhood, it can be visited at any time, including the King gravesite.  The museum is open June through August from 9:00am-6:00pm; and September through May from 9:00am-5:00pm.  Check ahead for church hours.  There is no charge for admission.  Web: http://www.historicebenezer.org/ (official website) 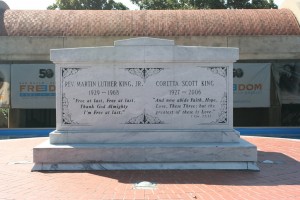