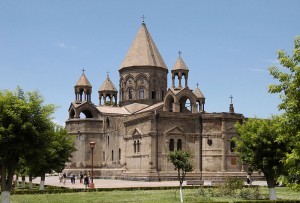 The small nation of Armenia, wedged between the Slavic nations to the north and Turkey and Iran to the south, has the honor of being the world’s oldest Christian state, with a population that has somehow managed to remain largely outside of the Muslim sphere for the better part of fourteen centuries.  The Bishopric of Armenia was the first major Christian institution to be officially sanctioned by a state in 309 AD, and the city of Echmiatsen has been the spiritual center for Armenia’s Christian community ever since.  The city’s cathedral is one of the oldest in the world, and houses numerous treasures, including artifacts associated with the Crucifixion and Noah’s Ark.  The Cathedral of Echmiatsen is part of the Echmiatsen UNESCO World Heritage Site.

Armenia has a long and rich religious history that ties it closely to both the Old and New Testaments, despite the fact that it lies some distance to the north of the traditional Biblical lands.  Many of the Bible’s earliest stories are believed to have taken place in and around Armenia, which was probably a major center of civilization before the Flood.  The mountain believed to be Ararat of the Noah story is located in the heart of traditional Armenian lands.  Although today it is on the Turkish side of the border, Mount Ararat still dominates the skylines of the Armenian cities of Echmiatsen and Yerevan.

Although ancient Armenia was conquered many times over the centuries, it always managed to quickly drive out or at least culturally absorb its occupiers.  This was true even during the days of the Roman Empire, when Armenia remained nominally independent of both the Romans and the Sassanids.  It is perhaps for this reason that Christianity was better received in Armenia than elsewhere.  Christian persecutions were rare in Armenia, and many refugees from the east found sanctuary there.  In 309 Christianity was recognized as the official state religion of Armenia, after which the majority of the people converted.

Two years later, Gregory the Illuminator established a church in Echmiatsen after a vision directed him to do so.  This church, built on the site of earlier pagan temples, soon became the seat of the nation’s bishopric.  Although Armenia’s capital would later move, Echmiatsen remained the ecumenical center of the Armenian Church.  A much larger Cathedral was built in the 6th century.  Throughout this period, though Armenia remained closely tied to the Byzantine Empire, its Christians were largely independent of foreign patriarchal authority.  Armenia’s history from the advent of Islam through the Ottoman period was nothing short of miraculous.  Begining with the Arabs in the 7th century, a parade of Islamic empires occupied the region, including most of the Turkish dynasties.  Despite this, its Christian population remained almost intact.  Nowhere else in the Muslim world did such a large Christian community survive so completely.

It was only at the very end of the Ottoman imperial period that the Islamic world seemed to take notice of the large Christian enclave in its midst.  Unfortunately, many Armenians were killed at this time in the largest purge of Christians since Roman times.  Many fled and found sanctuary within the borders of the Soviet Union after 1918, but the surviving Armenians in Turkey were severely persecuted.  Fortunately many of the sacred sites of the Armenian heartland, including Echmiatsen, survived the turbulent period.  The Cathedral of Echmiatsen remains the seat of Christian authority in Armenia, and is now an Oriental Orthodox Patriarchate.  The cathedral with its sacred treasures is the most venerated Christian site in the country.

The Cathedral of Echmiatsen is one of the world’s oldest churches, with part of its construction dating back to the 4th century.  However, the majority of the structure dates to the early 6th century, although there have been many additions and renovations over the years.  The ancient style borrows somewhat from the Byzantine but is otherwise uniquely Armenian.  The original main building in the center appears more like an old Roman fortification rather than a church.  Overall the cathedral is on the small side.  The unusual central tower is crowned with a conical roof rather than a dome.

The cathedral’s interior appears even smaller than the outside suggests, largely because much of it is devoted to non-worship use.  Specifically, the building houses a museum in which many interesting pieces of artwork and artifacts are displayed.  One of the cathedral’s architectural curiosities is an ancient fire-pit from the site’s earlier incarnation as a pagan temple.  It has been preserved and is located near the altar.  Among the cathedral treasures is the spear that is believed to have pierced the side of Christ as he was being crucified.  Another is a hunk of wood that supposedly belonged to Noah’s Ark.  Interestingly, carbon dating of the wood dates it at several thousand years old, which might match it to the Biblical timeline.

The Cathedral of Echmiatsen is located not too far from the Patriarchal seat of the Armenian Orthodox Church, a short walk from the city center.  As of this writing, no visitor information was available concerning hours or admission.  Web: www.armenianchurch.org (official website)

Armenia has a long tradition as a monastic center, and boasts some of the finest ancient churches and monasteries still in use in Central Asia.  Among these are the Church of St. Gayane and the Church of St. Hripsime, both of which date from the early 7th century.  Echmiatsen also boasts the very ancient Geghard Monastery and Khor Virap Monastery.  Also nearby is Mount Ararat which dominates western Armenia and looms ominously over the surrounding plain.