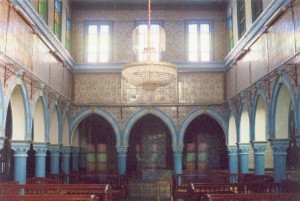 The extremely ancient Jewish community of Tunisia is one of the oldest Israelite colonies outside of the Eastern Mediterranean region.  In fact, other than the Israelites of Palestine, Egypt and Mesopotamia, it may be the world’s oldest Jewish community.  If this is indeed the case, than it would also be among the oldest continuous Jewish population in the world, though it has dwindled in recent years to less than two thousand people.  Though the El Ghriba Synagogue only dates back to the 19th century AD, its congregation traces its roots at least as far back as the 6th century BC.  This claim, surprising as it may seem, may actually be true based on the history and geography of the Mediterranean, as well as on the Tunisian Jews’ most prized possession: what is believed to be the world’s oldest Torah.

During the days of the divided kingdoms, the people of Israel and Judah found themselves constantly at odds with its neighbors on all sides.  To the north were the Syrians who warred constantly with Israel.  To the south was Egypt, whose frequent forays into Canaan wreaked havoc in the region.  To the east were the rump states of Ammon, Moab and Edom, whose pagan rites and sinful ways made them natural enemies of the Twelve Tribes.  To the west were the Philistines, who perpetually tested the mettle of Judah.  Only in one place did the Israelites find peaceful neighbors: to the northwest, in Phoenicia.

From the earliest days of the Israelites in Canaan, relations between them and the Phoenicians had been cordial.  The kings of Phoenicia developed strong ties with Israel during the days of Solomon.  This was particularly true of the tribes of Asher, Naphtali and Zebulun.  These northern tribes learned the trades of shipbuilding and navigation from the Phoenicians, and became the first seagoing Israelites.  When the Phoenicians settled Carthage and the North African coast, it is highly probable that Israelites were among them.

In any event, there was certainly a Jewish community in North Africa at the time of the Roman conquest of Carthage.  Over the centuries, the Jews of North Africa seemed to have been spared most of the ravages and persecutions of their brethren in the east.  It is perhaps for this reason that the congregation of El Ghriba possesses a Torah scroll that has survived since pre-Islamic times, possibly even pre-Vandal, times.

For the most part, they had the good fortune of living under a succession of tolerant foreign rulers, and many Jews found refuge in North Africa after being driven from other lands, notably from Spain in the 16th century.  However, in the wake of World War II, after perhaps twenty-five centuries in the area, the Jews of North Africa were no longer welcome.  Despite the fact that most of region’s Jewish population survived the Nazi occupation, the ensuing rise in anti-Semitism led the majority of the population to depart.  From a pre-war population of one hundred thousand, less than two thousand now remain.  Though not the only surviving synagogue, El Ghriba and its precious Torah scroll is the most important and the center of Tunisia’s ever-dwindling Jewish community.

The current incarnation of the El Ghriba Synagogue was built in the 1800s, but according to tradition occupies the same spot as the original synagogue constructed in ancient times.  The layout and design of the beautiful synagogue are strongly influenced by the Moorish style typical of the area.  The exterior of the synagogue is a deceptively simple white-washed stone building, with little to hint at either its purpose or the stunningly beautiful sanctuary within.

The interior of the synagogue is an impressive structure of columns, arches and high ceilings, all decorated in fantastic tilework.  Originally the synagogue had both an enclosed and an open prayer area in the manner of a mosque.  But the open prayer area was eventually enclosed as well, providing a much larger interior sanctuary.  According to tradition, a stone in one of the archways was originally part of the altar of Solomon’s Temple, brought to North Africa by Jews fleeing from the Babylonian Captivity.  The synagogue’s greatest treasure, what is generally considered to be the world’s oldest hand written Torah scroll, is kept closely guarded and is not always available for public viewing.

The city of Djerba is descended from an ancient Phoenician settlement on a small island just off the coast of southern Tunisia, nearly two-hundred and fifty miles south of the capital of Tunis.  Getting to Djerba requires at least part of a trip by plane or ferry.  There are generally no restrictions on visiting the Djerba Synagogue, but ever since a terrorist bombing there in 2002 security has been heightened, especially on the Jewish holidays.  As of this writing, no visitor information was available for this site.  Web: Not Available

Although most of Tunisia’s Jews are now gone, their relatively recent departure means that much of their old community is still intact, including many of the synagogues.  The Jewish Cemetery of Djerba may be the oldest in North Africa.