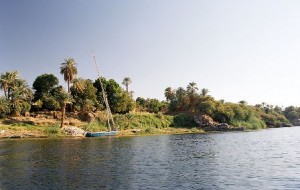 The Israelite Temple on Elephantine Isle in the south of Egypt is one of the least known and most poorly understood important Jewish monuments in the world.  From the time of the destruction of Solomon’s Temple in 586 BC until its reconstruction, the Elephantine Temple was a critical center of Jewish religious life and priestly activity.  The origins of the Temple on Elephantine Isle are shrouded in mystery, as is its strange and inexplicable decline a few centuries later.  Little remains of the ancient site, and nothing of the old Jewish community.  However, thanks to a large cache of records called the Elephantine Papyri, there has been renewed interest in the enigmatic temple in recent years, and the isle is finding its way onto the itinerary of many visitors to Egypt.

How and when a Judaean or Israelite community was founded on this isle in the midst of the Nile River on Egypt’s southern border is largely a mystery.  It has been suggested that the first arrivals were mercenaries who had been recruited by the Egyptian Pharohs for their wars against Ethiopia and the Nubian tribes of East Africa.  The community existed by the 7th century BC, but may in fact have been two or three centuries older.  It is equally possible that the early Elephantine community was founded by refugees from the Assyrian conquest of Israel, in which case it may have consisted primarily of Samaritans.  Refugees from Judea probably came here as well following the Babylonian conquest of Jerusalem in 586 BC.

Similarly, it is not exactly certain when the first priests arrived, whether they came with the earlier settlers or later, or even whether they came from Israel or Judea.  They certainly arrived no later than the early 6th century BC following the sack of Jerusalem.  When the priests arrived on Elephantine, they found the Jews living there in the midst of a polytheistic, idol-worshipping Egyptian society.  The Elephantine Papyri suggest that some of the transplants had adopted a polytheistic faith, worshipping both the God of Abraham as well as one or more of the local Egyptian deities.

The priests, whether of Israelite or Judean origin or both, decided to establish a new temple on Elephantine where the refugees could once again be directed towards the worship of the God of Abraham and the law of Moses.  This likely took place after the destruction of Solomon’s Temple.  This would have made sense for three reasons.  First, memories of Solomon’s Temple were fresh, and a desire to memorialize it with a new structure would have been strong.  Second, if the refugees were unaware of the Jews in captivity in Babylon, they might have seen their small community upon Elephantine as the last surviving outpost of Judaism.  Third, there is a remote possibility that the Levite priests fleeing Jerusalem might have brought the Ark of the Covenant with them to Egypt, thereby requiring a new home for the sacred artifact.

The Jews of Elephantine remained there at least until the 4th century BC, with their residency well documented between the years 495 and 399.  During this period the Elephantine Temple remained in regular use.  Little is known about the end of the Jewish exile upon Elephantine.  The majority of the community and its priests probably returned to Judea during the Persian occupation.  The temple fell into disuse, and was eventually abandoned altogether.  Its final demise came at the hands of builders who pillaged the site for stone and bricks.

Elephantine Isle is literally an island in the middle of the Nile River and is the historic heart of the city of Aswan.  Much of the island is now a vast open collection of ancient ruins overseen by the Aswan Archaeological Museum.  In addition to the museum, the island has many interesting sites, including the ruins of the ancient town of Yabu, numerous temples, a famous Nilometer used to determine the depth of the river and many large boulders which resemble elephants.  It is possible that these are the source of the isle’s name.

The remains of the original Jewish settlement are all but gone, lost amid later developments.  However, some traces of Jewish homes and buildings have been discovered at the southern end of the island in and around Yabu.  The Elephantine Temple once stood next to the temple of the god Khnum, which still exists.

Elephantine Isle is part of modern-day Aswan, the southern-most major city along the Nile River in Egypt, approximately four-hundred and fifty miles south of Cairo.  While Elephantine Isle is an open site, the island must be accessed by boat.  A number of ferries connect Elephantine with the rest of Aswan.  The main ferry close to the American Express office brings visitors to the point closest to the museum.  The museum and ruins are open Sunday through Friday at 8:00am (closing times vary throughout the year).  The cost of admission is EL10.00.  Web: www.touregypt.net (official tourism website of Egypt)

All of the places of Jewish interest here are located among the archaeological sites at the southern end of the island.  The Elephantine Papyri are now kept at several different locations, including the Egyptian Museum of Berlin and the Brooklyn Museum in New York.