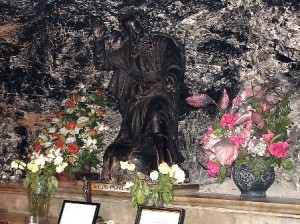 Elijah’s Cave on the slopes of Mount Carmel has been revered by Jews, Christians and Muslims for millennia.  The great Prophet Elijah spent several years of his ministry residing in this cave, sometimes taking refuge from his enemies, sometimes taking refuge from his crowds of devotees.  Several Jewish and Christian traditions suggest that this cave may play a role in the final coming of the Messiah, and so it has been considered a sacred place from at least as far back as the Captivity period.  The shrine of Elijah is now nominally a part of the Stella Maris Carmelite Monastery, which oversees the site.  However, it is freely open to all pilgrims, and receives many Jewish visitors annually.

Elijah was one of the most important figures in the later history of the Hebrew Bible.  The first great prophet of Israel since Samuel, Elijah ushered in what was for all intents and purposes the age of the Prophets.  During this period, which was roughly contemporary to the time of the divided kingdoms of Judah and Israel, dozens of prophets acting independently of either royal or priestly authority worked diligently to keep the people faithful to God.  In his dealings with Ahab and Jezebel, the sinful rulers of the Northern Kingdom, Elijah set the standard against which all future prophets would be measured.

Little is known of Elijah’s early life.  According to tradition, he lived an asthetic life in the cave on Mount Carmel even before beginning his ministry.  Most of his career involved his confrontations with Ahab, the king of Israel, and Jezebel, his Phoenician wife, both of whom worked diligently to introduce the religion of Baal into the Northern Kingdom.  Almost all of these confrontations involved miraculous activites and disasters brought down upon Israel, from devastating drought to the raining down of fire from the Heavens.

Elijah’s life seems to have had many parallels and connections to that of Moses, and both Jews and Christians consider Elijah among the most important prophets of the Hebrew Bible.  The greatest miracles of the Old Testament, excluding a few events in Genesis, were all enacted by either Moses or Elijah; both spoke to God upon Mount Horeb (Sinai); and both ascended directly to Heaven from an undisclosed location on the far side of the Jordan River.  More importantly, both Elijah and Moses are closely connected to Jewish Messianic teachings, and both men are expected to return to the world to preach before the final arrival of the Messiah.  Finally, Moses and Elijah are both honored on the festival of Passover.

Much of Elijah’s life took place in and around his cave-residence on Mount Carmel.  When he wasn’t in hiding elsewhere or in the city of Samaria confronting Ahab and Jezebel, he seems to have spent most of his time here.  After returning from his first exile in Phoenicia, he spent time praying in this cave before his famous confrontation with the priests of Baal on Mount Carmel.  In his later years he instructed his disciples here, including his successor Elisha.  The cave was a place of pilgrimage as far back as Elisha’s day, and many hermits have lived in the cave throughout the centuries.  The Carmelite monastic order was founded at the cave in the 13th century.  A succesion of churches and mosques have stood on the site ever since.

The Cave of Elijah is part of the grounds of the Stella Maris Monastery.  Religious buildings have stood upon the site since the Middle Ages.  The current incarnation of the abbey was built in 1836 after its predecessor was destroyed by French and Ottoman armies a few years earlier.  The monastery belongs to the Carmelite order and is dedicated to the Christian Holy Family, which also took refuge in the cave when Jesus was a young boy.  However, the Prophet Elijah is also commemorated in the church’s magnificent artwork.

Elijah’s Cave is now part of the monastery’s crypt.  Because of its importance to all three of the Abrahamic faiths, the crypt is generally open to all visitors.  The crypt is partially carved out of the mountainside and partially enclosed by masonry walls.  Elijah’s shrine is an offshoot of the main crypt.  Within are the religious accroutements of all three faiths, including an altar and prayer carpet, as well as religious artwork including a statue of Elijah.

The Stella Maris Monastery is located on the western edge of Downtown Haifa on a promontory facing the Mediterranean Sea.  It is easily accessible to the city center by public transportation or a long walk on foot.  The Stella Monastery and Cave of Elijah are open Sundays through Fridays from 8:00am-5:45pm (early closing on Fridays).  There is no cost for admission.  Web: www.tour-haifa.co.il (official tourism website of Haifa)

There are a few other known sites related to the life of Elijah.  Besides his cave on Mount Carmel is Elijah’s Hollow on Mount Sinai, where the prophet spoke to God while he was in exile.  Two small shrines honoring Elijah and Elisha can be found there.  Also there are two places that claim to be home to the Tomb of Elisha, Elijah’s successor.  Both are nearby: one site is on Mt. Carmel and the other is near the city of Akko.