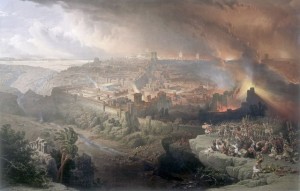 From ancient Egypt in the second millennium BC to Great Britain in the 20th century, there has been a three thousand year parade of empires marching across the world stage. One has replaced another on a routine basis. At any given time, there has been a greatest empire on Earth, at least until the end of the Second World War. And all of these empires has had exactly one territory in common:

The only other two countries that come even close to Israel’s record are Syria and Turkey, with a handful of other Middle Eastern countries behind them. But Israel is the champ. Here’s the evidence:

Egyptians and Hittites: The world’s first empires, relatively small though they were, flanked ancient Canaan to the north and south. Both claimed the territory and had colonists there. The first recorded battle in history, the Battle of Kadesh, was fought for control over the region. The Egyptians triumphed, and Canaan became a protectorate of Egypt for several centuries.

Assyrians: In the 9th century, a new power, the Assyrians, arose to supplant both the Egyptians and the Hittites. The Assyrian realm is generally considered to be the world’s first true empire, stretching from Egypt and Turkey in the west to Iran in the east. The northern kingdom of Israel was absorbed in 720 BC, while Judah became a client state.

Babylonians: In 612 BC, the Assyrian Empire was overthrown by the Babylonians, who forged an even larger and more powerful, if more corrupt and more short-lived, empire. The Babylonians absorbed almost all of the old Assyrian territory, and in 586 BC conquered the Southern Kingdom of Judah including Jerusalem.

Persians (Medes and Achaemenids): In the 8th century BC, an even larger empire was taking shape further to the east. The first Persian kingdom under the Medes overthrew the Babylonians and absorbed its territories, including Israel. These were passed on to the Achaemenids, who built the largest empire to date, and under whom Israel was a client state.

Greeks: In 334 BC, Alexander the Great led the greatest war of conquest in ancient times. He conquered the Persia and extensive additional territories as well. Israel, which had enjoyed a brief period of automony under the Achaemenids, was now part of Alexander’s Empire. It was fought over by the Seleucid and Ptolemic successor empires until the Maccabean Revolt.

Romans and Byzantines: From humble beginning on the Italian peninsula, Rome grew into the greatest and longest-lasting political entity in world history. In the 1st century BC, they annexed Judea under the pretense of putting down civil unrest. They stayed there for over nearly four hundred years, before passing it on to the Byzantines for an additional three hundred years.

Persians (Sassanids): After a millennium in the shadow of the Greeks and Romans, the Persians finally reemerged as the world’s major empire in the 6th century, at least for a few decades. During their brief years of re-expansion, the Sassanids reconquered Israel after a hiatus that lasted nearly a thousand years, but they would only hold it for a few decades.

Arabs, Umayyads, Abbasids and successor states: Almost immediately on the heels of the Sassanid conquest, the forces of the Islamic Caliphate swarmed out of Arabia and conquered everything from Spain to India. From this time until the Crusades, Israel was part of a succession of Muslim empires, all of which were the largest of their times.

Mongols: In the 13th century, the Mongols arose in Central Asia and laid waste to everything in their path, creating the largest contiguous land empire in history. They crushed most of the Muslim territories in the Middle East, and were on their way to Egypt, when they were stopped at the Battle of Ain Jalut in Israel, which marked the farthest point of the Muslim advance.

Ottomans: In the wake of the breakup of the Mongol Empire, a new Muslim power emerged under the Ottomans. The Ottomans re-established the pre-eminent empire in the Middle East, expanding it deep into Europe and across Africa. It occupied Israel in the early 1500s and held on to it for four centuries.

British: At the dawn of the Age of Exploration, the definition of an empire considerably, as the nations of Europe expanded across the oceans of the world. For a brief period the greatest of these was the Spanish Empire, but Spain probably did not surpass the Ottomans before the British the Spanish (okay, I’ll admit I’m stretching a bit by excluding the Spanish Empire).

Anyway, by the 18th century, Britannia ruled the waves, and over a quarter of the land area of the Earth. After the Ottoman Empire collapsed in 1918, Israel became a protectorate of the British Empire, a distinction not shared by Syria or Turkey (which had heretofore always been in the same empires as Israel).

So, following the above chain, it can be seen how Israel, and ONLY Israel, has been part of every preeminent empire in history. Coincidence?

After all, if you had an empire, wouldn’t you want Israel as a part?