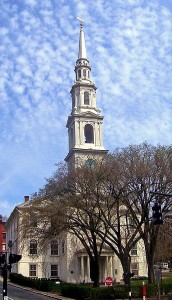 The First Baptist Meeting House, also known as the First Baptist Church of Providence, is both the oldest Baptist church in the United States and the oldest Baptist congregation.  Founded by Roger Williams, the famous religious leader in exile from Puritan Massachusetts, this was America’s first truly home-grown church and therefore.  The First Baptist Meeting House is regarded as the birthplace of the American Baptist movement and has become a place of religious importance on par with the Puritan sites of nearby Plymouth.  It remains an active church to this day and is one of the most important historic sites in Providence.

Roger Williams was among the earliest settlers to immigrate from England to the Massachusetts Bay colony.  In 1631 he arrived in Boston, where he was welcomed by other separatists who had come to the Americas in search of religious freedom.  He served as a teacher and later a minister in Boston, Plymouth and Salem.  However, within a few years he found himself at odds with local religious and political leaders over various matters, including the separation of church and state. 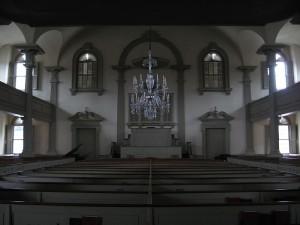 In 1635 Williams was tried and convicted of sedition and heresy.  He fled Massachusetts and traveled more than a hundred miles overland to what is now Rhode Island.  There, in 1636, he and a few of his followers founded the new colony of Providence.  Over the next few years he was joined by other exiles fleeing the Puritan territories, including Anne Hutchinson.

In 1638, Roger Williams, a Calvinist, founded a new congregation in Providence.  This congregation, which was organized as a Six-Principal Baptist Church, was the first true Baptist Church in the United States.  His church espoused, among other things, freedom of religion and the separation of church and state.  The colony became a haven for several religious groups, including Quakers and Jews.  It was also here that the first seeds of the abolitionist movement were sewn. 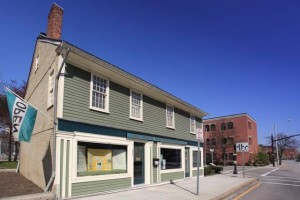 Through most of the 17th century, Baptist meetings were generally held in informal settings, such as congregant’s homes.  This was in keeping with some of the anti-establishment principals of the Baptist movement.  However, in 1700 a small meeting house was built, and a larger one constructed in 1736.  Finally, the current building was constructed in 1775, and the congregation has been active at this location until the present day.

The First Baptist Meeting House (officially now known as the First Baptist Church in America) is a stunning colonial era structure, one of the finest church buildings constructed in the late 18th century.  Built of brick and timber, the entire church exterior is painted a brilliant white which makes it stand out among the buildings of the surrounding neighborhood.  Its most distinguishing feature is the seven-story belfry and steeple which towers over the main entrance. 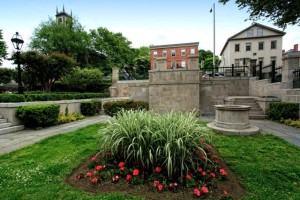 The church interior consists primarily of the two-story sanctuary, aka the meeting room, with its towering pulpit and graceful balcony.  It is a strange combination of magnificent workmanship and an utterly neutral color scheme of whites and greys.  The windows are almost conspicuously not stained glass.  The lack of artistic distractions is clearly meant to keep the congregant’s minds focused only theological thoughts.

The First Baptist Meeting House is located in the center of Providence’s historic old town and just across the river from the main downtown area.  As of this writing no visitor information was available.  Web: www.firstbaptistchurchinamerica.org (official website). 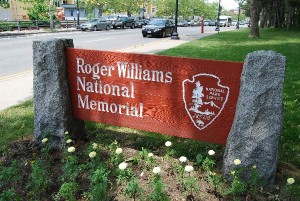 Providence is home to several important early Baptist sites, several of which are closely related to the First Baptist Meeting House.  One is the Roger Williams Memorial, located in a park a few blocks north of the church.  Just a few blocks to the east is Brown University, which was founded in the 18th century by the members of the congregation.  The First Baptist Meeting House is still used for university events.  Just south of Providence, in North Kingstown, is the Six Principal Baptist Church, the oldest surviving church of one of the oldest Baptist spinoff denominations in the United States.