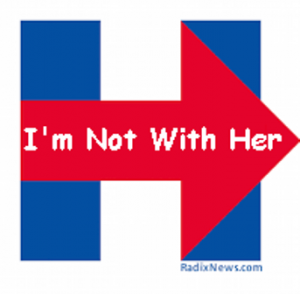 Well, Inauguration Day is upon us, and Americans from Sea to Shining Sea are still doing a lot of soul searching, especially Hillary Clinton supporters. Among mainstream Democrats, who generally supported Clinton, the list of excuses is varied:  she lost because she had been vilified by political enemies for decades; American men are not ready for a female president; Russian hackers working at the behest of Vladimir Putin sought to undermine her campaign by releasing her emails to the public and rigging the vote count; third party candidates shifted the vote balance to Trump in critical areas.  These are just a few of a dozen or so reasons that Democrats blame for her loss.  To be fair, they were all minor contributing factors.

The Progressive wing of the Democratic Party places more of the blame on Clinton as simply a horribly flawed candidate. They cite her historically awful favorability numbers; they discuss her virtually non-existent track record as a liberal, calling her a neo-con who was utterly out of touch with American blue collar workers; they point out how years of scandals, both real and imagined, had left her politically scarred; they rage about how she and her surrogates completely disregarded and brushed aside the Bernie Sanders supporters.  These too were all part of the problem.

As for Republicans, they don’t offer any explanations. They’re just happy she lost, even at the expense of a Trump presidency.

However, there were several other critical factors that contributed to her loss that few people, if any, seem to be discussing. So, in hopes that the Democratic Party eventually does a post-election autopsy, they might want to keep the following factors in mind.

No matter how successful or beloved a president is, Americans are instinctively wary of political dynasties in the executive branch. In the few cases where one family produced more than one president, two of the elections took place under a dark cloud (John Q. Adams, George W. Bush), and two were one-termers (Adams, Benjamin Harrison).  Undoubtedly the most successful pair were the two Roosevelts, but these were sufficiently distantly related as to not truly constitute a dynasty.

As far back as early 2015, when Hillary Clinton and Jeb Bush were both considered to be primary frontrunners, there were already voices in the wilderness decrying both families. These early oracles saw a never-ending cycle of Bushes and Clintons running for office as a modern day War of the Roses.  The Republicans showed Jeb Bush the door back in February.  Unfortunately, the Democrats didn’t realize that the same forces that rejected Bush were pushing Hillary Clinton out the door as well.

It’s Not That Clinton Is A Woman (Well, Not Exactly)

It has been charged by Hillary Clinton supporters that one reason she lost is due to chauvinism. Some of her more extreme supporters have suggested that almost everyone who didn’t vote for her must have been sexist, a charge that particularly riles many Bernie Sanders supporters.  And while there were undoubtedly people who didn’t vote for her because she’s a woman, let’s face it, most of these people would probably not have voted for a Democrat anyway.

The big problem was not that she was a woman; it was that being a woman had become her de-facto platform. Now the fact that she wanted to prove the point that a woman could do anything is certainly admirable, and was a laudable message to girls and younger women.  But the truth is that that message became, for all intents and purposes, tiresome to many.  It resounded in her every speech, and flashed on every t-shirt and bumper sticker that read “I’m with Her”.  If she had spent even half of the effort trying to reach out to American blue collar workers as she did promoting feminism as an end in and of itself, she might now be president.

Throughout both the primaries and general election, Hillary Clinton was accused of unequalled arrogance among her various rivals. But what does this really mean?  Virtually anybody who has the temerity to run for President of the United States is, at least on some level, arrogant.  In Clinton’s case it wasn’t that she was arrogant; it was that she and all of her surrogates were cocky as hell, especially in the last few weeks.  By October stories were already circulating that the Clinton supporters were already picking out their offices rather than paying attention to what was happening in the firewall states.  A massive victory celebration was planned at the glass-ceilinged Javitz Center.  Prematurely, as it turned out.

I know this may seem entirely superstitious, but never underestimate the perils of tempting fate. Fate has a way of obliterating those who fly too close to the sun.  I believe that many last-minute deciders watched the election stories in October, saw that omnipresent phony looking grin on her face, the same one that George W. Bush always had, marched to the polls and said a resounding “no”.  To paraphrase Apollo Creed’s trainer in Rocky, “She thought she was in a damn show; she didn’t realize she was in a damn fight.”

This may be one of the most underappreciated factors that led to Hillary Clinton’s defeat. In the aftermath of the political conventions, Gary Johnson was running a respectable, if distant, Third Party campaign as a Libertarian.  While he had no realistic chance of winning, it was looking increasingly like he could become a spoiler.  So when he made his gaffe in September about Aleppo, the media pounced, probably thinking it would help Clinton.  A few weeks later he followed up with his inability to name another world leader, and the Democrats went in for the kill.  Soon afterwards his numbers began to plummet.

But then a strange thing happened. As Johnson’s numbers fell, Trump’s numbers improved.  Belatedly the Democrats realized that Johnson was drawing the majority of his support from Republicans, who saw the Libertarian as a viable way to protest against Trump.  By the time the media and the Democrats figured out that Johnson was actually helping Clinton, the damage was done.  By mid-October the negative stories in the media against Johnson had all but stopped, but it was too little, too late.  Clinton had accidentally destroyed her greatest unwitting ally.

Clinton Supporters Almost Certainly Interfered In The Primary Process, While Trump Supporters Did Not

When it comes to corruption, or at least the perception of corruption, both Hillary Clinton and Donald Trump can vie with the best of them. But from an election standpoint, at least as far as the primaries were concerned, Donald Trump’s hands were squeaky clean.  The majority of the Republican establishment was against him, and there was, realistically, simply no way he could have tampered with the primary results.  For that matter, the Republican primary in general seems to have been conducted with integrity, with no serious accusations of vote or voter rigging.

Not so the Democrats. While the Republican primaries seem to have been conducted cleanly, the Democratic primaries certainly were not.  Huge numbers of voters across the country were disenfranchised for a variety of reasons, and most of those disenfranchised were likely Bernie Sanders supporters.  Now would Clinton still have won without these shenanigans?  Most likely.  But when voters went to the polls in November, especially independents, they remembered what the Democrats had done.  And in this respect, at least, Trump was by far the less tainted candidate.

I’ll end with the good news. Donald Trump will all but certainly be a one-term president.  All but certain, that is, unless the Democrats don’t do some serious soul searching and learn from their mistakes.