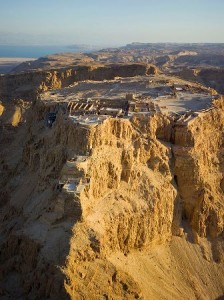 Masada, the sprawling hilltop fortress palace built by Herod the Great as a winter retreat, witnessed the tragic end of one of the saddest chapters in the history of ancient Israel.  It was here on this inaccessible plateau perched high above the southern tip of the Dead Sea that Jewish zealots of the Great Revolt made their final stand against the Roman Empire in 73 AD.  After a ferocious and literally suicidal defense, the Jews fell before the onslaught of the Romans.  Afterwards the site was apparently abandoned, even by the victors.  As a result, not only has much of the great fortress survived to the present day, but also evidence of the battle itself, including the old Roman siege-ramp.  Masada is the great modern-day symbol of Israeli independence, as well as an informative archaeological site.  Masada is a UNESCO World Heritage Site.

Unlike most other historical sites near the coast of the Dead Sea, which tend to be very ancient, the area around Masada was largely neglected until the Hasmonean period.  It is unlikely that the great isolated outcropping of rock had ever been inhabited or built upon until Jonathan the Maccabee established a small military outpost there during the Jewish revolt against the Greeks in the 2nd century BC.  During the prolific building period of Herod the Great, the fortifications of Masada were improved and increased on a massive scale, largely for the protection of his new palace.  While the choice of such a desolate place is something of a mystery, it was probably because of its proximity to Herod’s Idumean homeland.

In 68 AD, the massive Zealot-led revolt against the Romans broke out.  A surge of patriotic fervor swept through Judea, and soon almost the entire province was in Jewish hands.  This state of affairs did not last long.  The emperor Vespasian sent his son Titus to crush the revolt, which he quickly did.  By the end of 69 most of Judea was back in Roman hands.  Jerusalem fell the next year, after which Rome’s army systematically reduced the remaining pockets of rebellion until only one remained: the garrison at Masada.  Early on in the revolt, Zealot rebels surprised the guards at Masada and seized it.  The Romans who came to retake the citadel did not have it so easy.  The hilltop fortress was fanatically defended by fewer than a thousand Jews, many of whom were women and children.

The siege lasted for months, a situation which favored the well-supplied Jewish defenders.  In order to break the stalemate, the Romans constructed an immense ramp with which to reach the top with their siege weapons.  Despite the desperate and valiant efforts of the defenders, the Romans eventually breached the wall.  Rather than be taken alive, almost every one of the rebels committed suicide.  Only a few survivors were left to tell the tale.  Although the siege was well documented, little is known about Masada after its fall.  It is possible that the Romans kept a small garrison at the fortress against the encroachments of the Persian Empire or a future Jewish insurgency, but in all likelihood the site was probably abandoned after the Bar Kochba revolt failed.

There is no further record of military operations at the site, though archaeological expeditions to Masada have revealed traces of occupation by Byzantines, Muslims, Crusaders, and so on.  Despite the fact that the Fortress of Masada is relatively isolated, it is one of the best-known sites in terms of its archaeological history.  After Israel reoccupied the region south of the Dead Sea, the fortress became an overnight sensation with Jewish pilgrims.  Most of the structures on the mountain were excavated in the 1960’s.  Today it is one of the most popular and most visited sites in southeastern Israel.

The plateau of Masada is massive, towering fifteen hundred feet above the Dead Sea.  Steep slopes on every side rise almost vertically at the summit.  There are only two ways to reach the top of the plateau: a winding road known as the Snake Path, and the Roman siege ramp which still stands to this day.  Most tourists arrive via the nine hundred foot climb up the Snake Path.  The perimeter of the plateau is still completely fortified with Herod’s massive wall, making the entire hilltop easily defendable.

The ruins at the top of Masada are extensive.  Most of the more interesting sites are packed in at the north end, where Herod built his main palace and scenic terrace.  A small synagogue stands just to the west.  The Snake Path arrives at the top of the cliff just south of the palace.  The ruins of a second visitor’s palace stand near the center of the western wall.  Most of the numerous other ruins scattered about the place include residences, baths and the like.  The southern tip of the plateau is guarded by a small citadel.

The Masada plateau is located close to the southernmost tip of the Dead Sea, about fifty miles south of Jerusalem.  Two things set Masada apart from other sacred sites in Israel.  First, it is one of the most intact ancient Jewish archaeological sites.  Second, it is completely, indisputably under the control of the Israeli government.  Thus, not only is it one of the most historical and emotional places for Jews to visit, it is also one of the safest.  Masada is run by the Israeli parks department, and is open April through September from 8:00am-5:00pm and from October through March from 8:00am-4:00pm.  Admission is NIS23 for adults, NIS12 for children.  The cable train is extra.  Web: www.parks.org.il (official website of the Israeli Parks Department)

Surrounding Masada are the remains of the vast Roman siege operation, the only archaeological site of its kind in the world.  The most complete excavated portion of the Roman camp, just east of Masada, was formally a large Roman Siege Fortresses.