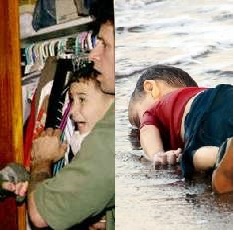 Two lives connected by an extremely unlikely (but undeniable) chain of events.

On November 21, 1999, a woman attempted to flee from Cuba to the United States with her six year old son, Elian Gonzalez. During the voyage the boat overturned, killing eleven of the fourteen travelers on board. Elian Gonzalez’ mother was among the dead.

Elian Gonzalez survived, and was taken in by relatives in Miami. However, the father who remained in Cuba fought for his son’s custody and demanded his return. Subsequent political, legal and diplomatic proceedings ruled in favor of the father.

After Gonzalez’ relatives refused to turn the boy over, federal agents were sent in to take the boy out by force. The imagery of the raid infuriated the Cuban community in the United States. Blaming the Clinton administration, many vented their anger against the Democratic Party.

Largely as a protest, unusually high numbers of Cuban Americans in Florida cast their votes for Republican candidate George W. Bush in the 2000 presidential election. This boost was one of the reasons that Bush barely carried Florida in the election (he won by a little over 500 votes).

Bush’s win in Florida gave him the state’s electoral votes, which barely put him over the top in the Electoral College (he won by just 5 electors) despite losing the popular vote by over half a million votes.

George W. Bush assumed the presidency and was in office when the terrorist attacks occurred on September 11, 2001. In response, he spearheaded a military campaign against Afghanistan in order to oust the fundamentalist government there and capture Osama Bin Laden.

Using questionable intelligence concerning Saddam Hussein and fabricated evidence of weapons of mass destruction, George Bush extended the War on Terror to Iraq in 2003, an act that almost certainly would not have happened had Bush not been president at the time.

While the Iraq invasion successfully ousted Hussein, the subsequent occupation of that country proved difficult, and the establishment of a stable military-political solution elusive. Troops remained on the ground there for eight years in a herculean effort to stabilize the situation.

In 2011, under extreme pressure from the international community and the American people, President Obama pulled the troops out of Iraq. Infighting between the country’s various factions began almost immediately.

The removal of Saddam Hussein ultimately led to the destabilization of both Iraq and neighboring countries, including Syria. Unrest in Syria began in mid-2011, just around the time American troops were being removed from Iraq.

With American troops gone, dissident Sunni forces in Iraq were able to move freely into Syria, quickly escalating the conflict there. By 2013, these forces were consolidating into the Islamic State, wreaking havoc in both Iraq and Syria.

As Islamic State grew more powerful, the conflict in Syria blew up into a full-fledged civil war. Both the Syrian government and the Islamic State began turning on the civilian populace, with atrocities occurring on a daily basis. Desperate, the Syrian people began fleeing the country.

Over the next few years, the number of desperate refugees from Iraq began to increase exponentially. From a few thousand in 2011, it is estimated that there are now over four million Syrian refugees trying to escape the conflict by any means possible.

On September 2, 2015, a man from Syria attempted to flee from Turkey to Greece with his three year old son, Alan Kurdi, and other family members. During the voyage the boat overturned, killing twelve of the sixteen travelers on board. Both Alan and his mother were among the dead.

Life for one desperate refugee, death for another.  Both etched forever into history.