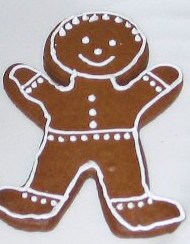 The Holiday season in general, and Christmas in particular, is a time of many things: faith, festivities, traditions, movies, music, decorations, gifts and much more. But the thing that ties it all together?  The food!

With roots that trace in part back to ancient pagan Solstice festivals, which were marked the world over by great feasts, the holiday season is in some ways an extension of the harvest celebrations of the autumn. And boy oh boy does the western world continue to embrace this facet of the holidays, especially when it comes to desserts.  For the best of the best, those in the know find their holiday treats at these famous confectioners:

Gingerbread cookies are one of the holiday season’s great culinary traditions.  Gingerbread was probably introduced to Europe as early as the 17th century, but did not become popularized in Christmas cookie form until much later.  The earliest recorded major producer of gingerbread was a bakery in the west England town of Market Drayton, which was making gingerbread cookies at least as far back as 1793. The Hopcroft family of Market Drayton is now virtually synonymous the world over with gingerbread.

The Hopcroft bakery is now officially known as the Image on Food Company, which maintains several gingerbread production facilities in and around Market Drayton, approximately a hundred and thirty five miles northwest of London. The Hopcrofts still operate in part out of The Bread Bin, where some batches of cookies are made for local sale (an early African Biscuit Machine is also on display here).

There are few holiday specialties around that have such an undeservedly bad reputation as the much maligned fruitcake.  Despite this, huge numbers of fruit cakes are consumed, by officianados around the world every year, and for those who indulge in this treat in North America, there’s a pretty good chance that it came from the Claxton Bakery in Georgia. The Claxton Bakery was founded in 1910 by Savino Tos, an Italian immigrant, who relocated to Claxton from New York City as he enjoyed the local people and, more importantly, the town did not have a bakery. The bakery became locally popular for its fruitcakes.

In 1945, Tos sold the bakery to his long-time employee Albert Parker.  Parker set about transforming the unassuming bakery into a holiday juggernaut.  Sales began to skyrocket in the 1950s when the Parker fruitcakes became a popular item for sales in fundraisers.  The Claxton Bakery now cranks out hundreds of thousands of the cakes annually, and is still up and running nearly a century after opening its doors.

Of all the treats associated with the holidays, nothing comes more readily to mind than the humble candy cane.  Candy canes have been the definitive Christmas candy since at least the 17th century, and though they have perhaps been surpassed in popularity by chocolate, candy canes remain the holiday icon. According to legend, sugar canes, without peppermint, made their first appearance in the Rhine region in the 17th century.  The first crook-shaped ones, representing a shepherd’s staff, showed up at Cologne Cathedral in 1670, where they were used to keep children quiet during church services.  Within a century they had become a staple of the holidays.  The red stripes and peppermint flavoring became wide-spread around 1900.

Since candy canes went main stream in the United States, two companies became closely associated with their production.  The oldest was Bob’s Candies, the largest candy cane manufacturer from 1920 until 2005, when they were bought out and their historic factory in Georgia closed.  Spangler, their main competitor, has been a confectionary icon since 1906.  With the demise of Bob’s Candies, Spangler is now the sole banner bearer of America’s historic candy cane production tradition.

One of the holiday season’s most popular traditional treats, at least in central and southern Europe, is marzipan.  Marzipan, a candy-paste derived from almonds and sugar, either originated in the Middle East or passed through there on its way to Europe at some time during the Middle Ages. At some point between the 15th and 17th centuries, marzipan made it to the Holy Roman Empire, where it was embraced as a holiday treat. Production of marzipan became a cottage industry in the cities of the Baltic Sea region, especially in Lubeck, which became the defacto marzipan capital of Europe.

In 1806, Johann Georg Niederegger opened a confection shop that specialized in marzipan.  By the end of the 19th century the Niederegger shop produced the finest marzipan in Lubeck.  Its candies were shipped all over Europe, and the Niederegger Café became one of the most popular cafes in the city.  It is still in operation today, and is one of the favorite shops in the city, both at Christmas and throughout the year.

Rounding out this list is the humble Christmas orange.  While no longer a widespread tradition, oranges were once a favorite treat of the holiday season, especially in colder climates where the tropical fruit was a rarity.   The giving of oranges reached a crescendo during the Great Depression, when exotic citrus fruits from Florida were often the high point of a child’s Christmas stocking.

Because oranges are extremely easy to come by all year round, especially in the United States, this once beloved tradition has fallen by the way side, but is still practiced by some die-hard enthusiasts.  For those who go all out and have their oranges delivered directly from Florida, one of the most popular places to order from is The Orange Shop in Citra.  The Orange Shop opened in 1936 at the height of the Great Depression, in part to cater to the nationwide demand for the holiday fruit.  The store has been owned and operated by the Spyke family for three generations.