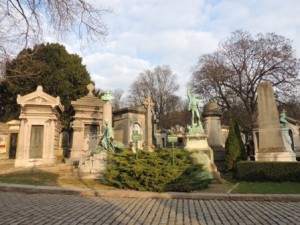 Like everywhere else in Europe, the history of the Jews in France was one of persecution and tribulation interrupted by the occasional reign of a tolerant monarch.  However, always at the forefront of enlightened thinking, France distinguished itself as the first major nation in Europe, along with the Netherlands, to officially embrace religious tolerance.  For the Jews of France this meant steady removals of restrictive laws that had set them apart from the rest of French society for so long.  Nevertheless the road was a rocky one, and not without its opposition.  The climactic event, and one of the most pivotal moments in European Jewish history, was the trial of Alfred Dreyfus.  The Dreyfus Affair as it came to be known ultimately led to the seperation of church and state in France, thus formally ending state-sponsored Anti-Semitism in that nation forever.

As the 18th century dawned in Europe, the Age of the Renaissance was giving way to something even greater – the Age of Enlightenment, in which reason at last began to push aside the old ways of prejudice and intolerance.  The first stirrings of the Enlightenment began in France, possibly in response to the horrors of the religious wars that had wracked Europe in the previous century.  The people of France, which emerged from the Thirty Year’s War as the dominant power on the European continent, began to recognize the futility of the slaughter of hundreds of thousands of people in the neighboring German lands over matters of religious affiliation.  It is interesting to note that when the French Catholics at last intervened in the final years of the conflict, they entered on the side of the Protestants.

This action distanced them from the Catholic Church, further loosening the religious ties that had bound them for so long.  This in turn led to a gradual increase in acceptance for people of different faiths, not only of Protestants but of Jews as well.  In 1785 the first Anti-Semitic laws in France were struck down.  Jews were allowed to live wherever they wished and would henceforth be taxed in the same manner as their countrymen.  A few years later, when the Revolution broke out, Jews flocked to join their fellow Frenchmen in the armies of the Republic.  Despite setbacks, including some violent backlashes by extremely reactionary forces, the condition of the French Jews steadily improved.

During the reign of Napolean Bonaparte, the Jews were permited to become integrated into the national government as well as the officer corps of the army.  Even after Napolean was defeated and the monarchy restored, the Jews retained these new rights and privileges.  Once again this caused a conservative backlash, especially in the circles of the French upper classes.  Resentful at what they saw as a threat to their own privelages, they did everything possible to undermine Jewish progress.  In the army, a systematic effort was made to discredit and remove the Jewish officers.  The crisis came to a head in 1894, when Alfred Dreyfus, a Jewish officer, was framed for an act of treason.

Dreyfus was court-martialed and falsely found guilty for passing top-secret information on to France’s enemies.  Another officer was vilified for helping to expose the cover-up.  However the entire plot was uncovered through the efforts of the writer Emile Zola and others, and the ensuing public outcry led to the condemnation of the reactionaries and calls for further reforms.  In 1899 Drefus was pardoned and fully exonerated in 1906.  More importantly, in 1905, the French government enacted the Law on the Separation of Church and State, which formally ended all state-sponsored religious persecution in France.  Dreyfus went on to a distinguished career in the French army, and was the first person of Jewish origin awarded the Legion of Honor.

Alfred Dreyfus died in 1935, and his funeral procession was incorporated into the Bastille Day celebration of that year.  He was buried in the Montparnasse Cemetery, one of the most prestigious in Europe, where hundreds of France’s most prominent leaders and distinguished citizens had been buried here since the 19th century.

The relatively modest tombstone of Alfred Dreyfus is lost in a veritable sea of spectacular monuments to the dead.  The amazing story of this man who changed the world is utterly neglected in the inscription, which simply states his name, rank, and dates of birth and death.  Dreyfus is also honored with a public statue which stands in front of Paris’ Museum of Jewish Art and History.

The Montparnasse Cemetery spraws over 14th Arrondissement (district) on the south side of Paris.  The cemetery is an open site.  Its official public hours are from 8:00am-5:30pm most days (opens later on weekends and holidays).  There is no cost of admission.  Web: www.paris.fr (official tourism website of Paris)

The Gravesite of Emile Zola, the French writer who worked so hard to free Alfred Dreyfus and forward the Jewish cause in France, is buried in the Pantheon of Paris, right next to Victor Hugo.