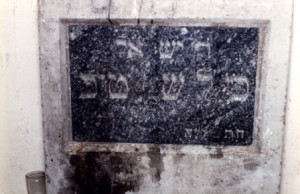 Orthodox Judaism is the most traditional and, in many respects, the most conservative and observant of Jewish denominations; and no group is more closely identified with Orthodox Judaism than the Hasidic Jews.  Although not the only Orthdox group, the Hasidim have most strongly preserved the traditions of classical Eastern European Judaism, from religious practices to customs to the manners of dress for which they are famous.  The Hasidic movement was founded by the Rabbi Israel ben Eliezer, more affectionately known as Ba’al Shem Tov, in Eastern Europe in the 18th century.  While there are many different Hasidic groups, virtually all of them look upon Ba’al Shem Tov as their common founder.  His gravesite, along with other locations associated with his life, has become an important pilgrimage destination for Hasidic Jews around the world.

Israel ben Eliezer was one of the most important and influential Jews in the later history of the Diaspora.  He was born in 1698 in Okopy in the Ukraine, and according to tradition maintained by some of his adherents, he was a descendent of the Davidian royal line.  From his childhood to the early years of his marriage, ben Eliezer preferred the outdoor life away from the cities and other traditional Jewish centers of existence.  His different views of nature, the universe and God grew out of this period and would have a profound effect on his later ideas and philosophies.

Ben Eliezer became respected in the local Jewish communities for his wisdom and fairness, and was often called upon to adjudicate legal disputes.  Although a learned man, he voluntarily spent much of his life as a manual laborer, from digging in clay pits to working as a kosher butcher to running a tavern.  In his spare time he developed a keen knowledge of the regional flora and was known for developing medicinal remedies.  For his skill as a healer, his charitable acts and the general respect he commanded, he was awarded the title of Ba’al Shem, which means ‘Master of the Name’ (of God).

When he reached his forties, Israel ben Eliezer, called Ba’al Shem Tov by his contemporaries, had developed a loyal band of disciples.  Settling down in the village of Medzhybizh, he established a school to pass on his ideas to others.  His teachings focused strongly on the primary importance of prayer rather than on mastery of the Talmud, which often put him at odds with the traditional rabbinical establisment.  By his later years, the Jewish community had begun to divide into two major groups: the Hasidim and the Talmudists.  However, although they disagreed on many things, it is important to note that the schism of the two groups did not lead to the kind of virulent antagonism that often plagued other religions such as Christianity and Islam.  In fact, the two groups usually cooperated in greater matters of common interest.

By the time of his death, Ba’al Shem Tov was the most important Jewish personality in Eastern Europe.  Although he personally wrote very little, his teachings were passed on orally to his disciples, and these teachings would become the foundation of Hasidic Judaism.  The movement split under a number of different leaders soon after Baal Shem Tov’s death, but all recognized and honored him as their spiritual founder.  The town of Medzhybizh has since become a veritable shrine of Baal Shem Tove-related sites, and thousands of Hasidic Jews from around the world visit every year.

The town of Medzhybizh is steeped in Hasidic history and sites.  There are several Jewish cemeteries in Medzhybizh, the most important one being the Old Jewish Cemetery.  It is here that the gravesite of Baal Shem Tov can be found, along with a number of other graves of early Hassidic leaders and adherents.  Another large Jewish cemetery outside of town is actually a mass grave of three-thousand Jews who were massacred by the Nazis during World War II.  A stone monument marks the site.

Medzhybizh was also home to Baal Shem Tov’s school.  The original structure was completely destroyed by the Nazis, but a replica has been built using old plans and photos as a guide.  The new building is now part of a museum with exhibits on the life of Baal Shem Tov and the early history of Hasidic Judaism.  Finally, there is an old well just outside of the city.  According to tradition, it was built by Baal Shem Tov himself.

The town of Medzhybizh is somewhat out-of-the-way in western Ukraine, approximately a hundred and twenty-five miles southwest of Kiev.  As of this writing, no visitor information was available for these sites.  Web: http://baalshemtov.com (official website)

One of the most important post-war Hasidic centers is located in Brooklyn, New York.  The Chabad Lubavitch world headquarters can be found here, including the Chabad Library, which houses one of the most extensive Hebrew and Yiddish libraries in America.  Among its artifacts is the Prayer Book of Baal Shem Tov.