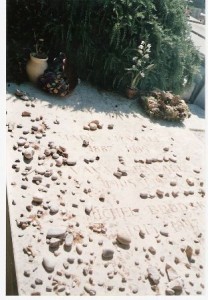 The name Marc Chagall is virtually synonymous with modern Jewish art.  One of the giants of European Modernism, Marc Chagall was one of the preeminent artists of the 20th century.  His work spanned the better part of eight decades, and was heavily influenced by the experience of Jews in Czarist Russia, Communist Russia, Nazi Germany and modern Israel.  His artworks and stained glass windows can be found in cities, museums, public buildings, synagogues and even churches around the world.  Marc Chagall is especially honored in the city of Nice, France, which is home to both his gravesite as well as to Marc Chagall Museum.

The Jews have a collective cultural history that has long been predominant in many areas, from literature to philosophy to the performing arts.  One area in which the Jews did not traditionally flourish was in the realm of visual artistic expression.  Even during the Renaissance, when painters and sculptors thrived across Europe, Jews who took up these pursuits were few and far between, with a few specific exceptions, such as in the craft of jewelry production.  It is believed that one of the major reasons for the dearth of Jewish artists prior to the late 19th century was a reticence to produce anything that might break the commandment against the making of graven images.

It was not until the Modern art movements of the 20th century that Jews began to make real strides in the visual arts; and in no person was this more evident than in Marc Chagall, the greatest and most influential Jewish artist of all time.  Born in Russia during the turbulent years of the end of the Tsarist regime, he lived through nearly a century of upheavals: the Russian Revolution, two World Wars, and almost the entirety of the Cold War.  He and his wife narrowly escaped the terrors of the Holocaust, fleeing from France shortly after its occupation by the Nazis.

Chagall’s artistic career was heavily influenced by his early life in Eastern Europe.  Although not a practicing Jew, Jewish themes pervaded his work throughout his entire career.  He studied for years in St. Petersburg, and then later in Paris.  He was actively involved in the Russian Revolution, and for a few years enjoyed a high position in the communist art world.  But eventually he turned his back on communism and moved to Paris where he spent the remaining interwar years.  After World War II he traveled around the United States, Europe and Israel, leaving a trail of artistic masterpieces in his wake.  He ultimately settled in Nice, France, where he died in 1985 at the age of 98.

Marc Chagall was respected by his contemporaries from his earliest days as an artist, garnering praise from such artistic masters as Pablo Picasso.  He was accomplished both as a painter and as a designer of stained glass windows.  Chagall’s art is indelibly tied to the architecture of the 20th century, and is prominently displayed in such places as the United Nations General Assembly Building, the Metropolitan Opera House, the Paris Opera House, St. Stephens Cathedral in Mainz, the Hadassah Ein Kerem Hospital in Jerusalem, and the State Hall of the Knesset.  He is universally hailed as one of the greatest artists of the 20th century.

Marc Chagall is buried in the St. Paul Town Cemetery in St-Paul de Vence.  It is a small graveyard, elevated and enclosed by a retaining wall which gives it a somewhat fortress-like appearance.  Most of the tombs consist of elaborate stone monuments, though Marc Chagall’s is a simple affair that is frequently covered by stones left by respectful visitors.

The Musee National Message Biblique Marc Chagall is one of several major art museums in art-rich Nice.  In addition to the numerous works of Chagall’s art on display, the museum has exhibits on the history of the artist’s life.  The most famous exhibit at the museum are the seventeen paintings collectively titled the Message Biblique for which the museum is named.  These paintings depict a series of scenes from the Old Testament of the Bible and are considered among his masterpieces.

The village of St-Paul de Vence is just outside of Nice, approximately five hundred and fifty miles southeast of Paris.  The St. Paul Town Cemetery is an open site.  The Marc Chagall Museum in Nice is open daily from 10:00am-5:00pm (later hours in the summer).  The cost of admission is Eu6.50.  Web: www.musee-chagall.fr (official website)

Marc Chagall’s works can be found in cities around the world.  In addition to his museum in Nice, there is a small Marc Chagall Museum located in Vitebsk , Belarus.  New York City is home to a number of his most famous pieces, including several Chagall paintings at the Museum of Modern Art, the stained glass windows in the United Nations General Assembly Building, and two enormous tapestries which hang in the Metropolitan Opera House.  He also painted the mural which adorns the ceiling of the Paris Opera House.  Others of his works can be seen in Chicago, Metz, Rheims, Zurich, Mainz, Moscow and Jerusalem.