The American colonies were home to a vibrant Christian culture that gave birth to a religious diversity that still thrives in the United States today.  Much of modern American faith can be traced to early religious leaders who, from the humble Puritan beginnings of the Pilgrims, went on to establish a great Reformed tradition.  This was manifested in the Presbyterian and other Reformed churches as well as sprouting new movements including the Baptist Church and Methodist Church.  Many of the champions of this early era have found their final resting places in the great churchyards of the era across what was once the American colonies. 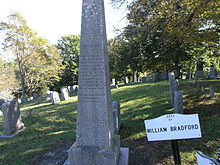 William Brewster was, for all intents and purposes, America’s first clergyman.  One of the Pilgrim Fathers who arrived on the Mayflower in 1620, Brewster was an energetic Puritan and Separatist.  As the most educated man of the new immigrants, he served the Plymouth Colony as its elder and spiritual leader until 1629.    Brewster was instrumental in establishing the Reformed Church in Massachusetts during the colonial era.  He died in 1644.

Plymouth, Massachusetts is one of the oldest towns in America.  Although most of the original settlement is long gone, a few relics remain.  The First Parish Church in Plymouth was constructed in 1899 and is now Unitarian Universalist.  However, its congregation can be traced directly to the original Puritan congregation nearly four centuries ago.  Next to the church is Burial Hill, where a number of the original settlers are buried, including William Brewster. 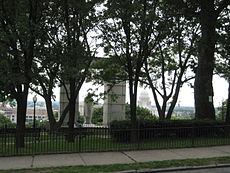 Roger Williams was arguably America’s first truly innovative theologian.  Although not one of the original pilgrims, Williams lived in the Plymouth Colony while many members of the Mayflower voyage were still alive.  He served as a clergyman in both Plymouth and in Salem, but came to have religious disagreements with the established order and was forced to flee in 1636.  He moved to what is now Rhode Island and founded the city of Providence.  Working with followers of Anne Hutchinson and other exiles, Williams established the First Baptist Church in America.  He died in 1683.

Williams was buried on his own property, but over time the exact location of his gravesite was uncertain.  What is believed to be his remains were rediscovered in the 19th century.  He was reinterred in Providence’s Prospect Terrace Park, a few blocks north of the First Baptist Church in America which is still standing.  His gravesite is commemorated by a monument constructed in the 1930s.

Jonathan Edwards was one of the greatest theologians of the American colonial era.  Edwards was born into a New England Puritan family, educated at Yale College, and went on to become a clergyman.  However, he eventually grew disillusioned with Puritanical practices and a general moral slide.  He was instrumental in launching the First Great Awakening, and his 1741 sermon ‘Sinners in the Hands of an Angry God’ was a milestone in the American Evangelistic movement.  He later moved to New Jersey where he co-founded Princeton University and briefly served as its president.  He died in 1758.

Princeton Cemetery is one of Colonial America’s most famous graveyards, and it has been referred to as the Westminster Abbey of the United States.  Although this might be a bit of hyberbole, it does boast its share of famous burials.  In addition to Jonathan Edwards, the graves of other very prominent early theologians can be found here, including Aaron Burr Sr., John Witherspoon and Charles Hodge (not to mention former president Grover Cleveland).

George Whitefield was an English-born preacher who became an integral figure of the Great Awakening movement in the American colonies.  An acquaintance of the Wesley brothers, he helped to spread Methodist ideas in England and in Savannah, Georgia.  He relocated to America permanently in the 1740s, where he participated in the First Great Awakening along with Jonathan Edwards.  An impassioned speaker, Whitefield traveled extensively throughout the northern colonies leading Revivalist meetings, speaking to huge crowds.  He was, in some ways, the father of American evangelism.  He died in 1770.

The Old South Church, also known as the First Presbyterian Church of Newburyport, is one of the oldest Presbyterian churches in the United States.  Its congregation was founded by George Whitefield in 1746, and it was one of the treasured places of his life.  He died in the parsonage while visiting his friend Jonathan Parsons, and was buried beneath the church at his own request. 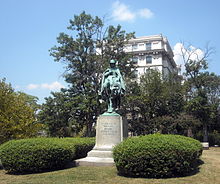 Francis Asbury was one of the last major American theologians of the Colonial era.  A close friend of the English minister John Wesley, Asbury was instrumental in establishing the Methodist Church in the United States.  He attended the Christmas Conference in 1784 where the Methodist Church was formally founded and where he was named as one of the church’s first leaders.  A major figure of the Second Great Awakening, he served the church until his death in 1816.

The Mount Olivet Cemetery in Baltimore is nicknamed the Resting Place of Methodist Bishops.  Many of the church’s most prominent leaders of the 18th and 19th century are buried there.  In addition to Francis Asbury, other important burials include Robert Strawbridge, Enoch George and John Emory, namesake of Emory University in Georgia.  Mount Olivet Cemetery is associated with Lovely Lane United Methodist Church, the mother church of American Methodism, which is about three miles away.