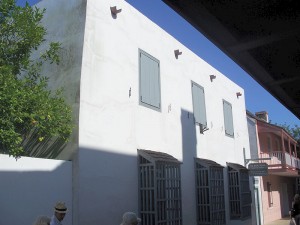 The first Greek settlers to arrive in what would be the United States came to Florida in 1768, which at that time had recently become a British colony.  Attracted to the area by a climate similar to Greece as well as by the Mediterranean cultural influences, the Greeks set up shop in St. Augustine where they established themselves as fishermen and merchants.  They acquired the Avero House to be used as a place of worship.  It was later renamed the St. Photios Greek Orthodox National Shrine. 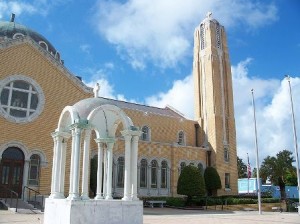 Dive for the Cross (wikipedia.com)

Throughout the 18th century, the Greek community in Florida steadily grew, expanding across the state to the Gulf Coast in and around the Tampa Bay area.  This coastal region, which was famous for its sponges, attracted more fishermen and divers from Greece who specialized in the harvesting of sponges.  For years this was one of the Gulf Coast’s most important industries. 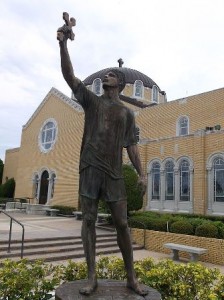 One of the biggest and most prestigious Orthodox Churches in the United States, it became an important cultural center for Greek Orthodoxy.  It is most famous for its annual festival known as the Dive for the Cross.  This event, part of the annual celebration of Epiphany, features a rite of passage for young Greek Orthodox men who chase after an iconic cross that has been tossed into the Gulf of Mexico.  It is attended by pilgrims and other enthusiasts from all over the world.

The Avero House in St. Augustine is a beautiful old whitewashed Spanish colonial building wedged in among other buildings along historic St. George Street.  It houses the St. Photios Chapel, which is still in use today, as well as a museum with exhibits about Greek culture and the early church in America.

The St. Nicholas Church in Tarpon Springs is quite a large building, more on the scale of a small cathedral than a church.  Its exterior design with is magnificent dome evokes images of the Hagia Sofia in Istanbul.  The church is renowned for its art and treasury, which includes a famous icon of St. Nicholas and an immense marble altar which was previously on display at the New York World’s Fair in 1939.

The Avero House is located near the center of St. Augustine, approximately 35 miles south of Jacksonville.  It is open Monday through Saturday from 9:00am-5:00pm, and Sundays from 12:00pm-6:00pm.  Admission is free, but donations are welcome.  Web: www.stphotios.com (official website).  The St. Nicholas Greek Orthodox Church is located on the north side of Tarpon Springs, approximately twenty miles northwest of downtown Tampa.  It is open year-round, with the largest crowds (not surprisingly) on the Day of Epiphany.  There is no cost of admission.  Web: www.epiphanycity.org (official website).

Probably the most famous related historic site was the New Smyrna Colony in New Smyrna Beach, approximately sixty miles south of St. Augustine, where another early Greek Orthodox colony was attempted but failed and where many of the earliest Greek settlers to the state died.