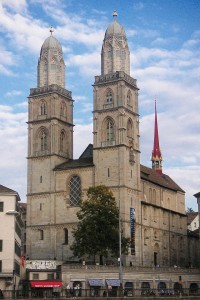 Uldrich Zwingli is the oft-forgotten third leg of the Protestant Reformation, almost lost in the shadows of giants Luther and Calvin.  The most prominent Reformer independent of Luther, he established Protestantism throughout much of Switzerland a few decades before John Calvin showed up.  Until Calvin established himself in Geneva, Zurich was the Reformation’s most important center in Switzerland and one of the most important in Europe.  Zwingli’s legacy is closely tied to the Grossmunster Church in Zurich where he preached his fiery sermons and where he was later buried after being killed in battle with the Catholics.  Along with the St. Pierre Cathedral in Geneva it is Switzerland’s most important Protestant heritage site.

Uldrich Zwingli was a contemporary of Martin Luther and a predecessor of John Calvin.  Like Luther he was highly educated and had trained for a life in the Church.  He became a minister in 1506, and served in that capacity for twelve years, including service as a chaplain to Swiss mercenaries in service of the Church.  In 1518 he became the priest of the Grossmunster Church of Zurich, at which time he seems to have begun having serious doubts and questions about Catholicism.  Whether or not Zwingli was influenced by Luther, who posted his Ninety-Five Thesis in 1519, has often been debated.  In all likelihood both were probably influenced by the general anti-Church sentiment spreading in Central Europe at the time.

Zwingli’s transformation was profound and dramatic.  By 1520 he had openly challenged the practice of indulgences and the use of mercenaries.  A fiery and popular preacher, Zwingli convinced the majority of Zurich’s citizenry to follow him.  By 1523, the Reformation was in full swing in Zurich.  But while Zwingli was nominally in agreement with Luther, his vision of Protestantism was even more austere (it would ultimately become an important root of the Puritan movement).  In later years a historic meeting between Zwingli and Luther took place in which a universal Protestant reconciliation was attempted, though unsuccessfully.

In 1525, after numerous meetings and debates, the Christians of Zurich broke with the Catholic Church outright.  Much of Switzerland soon followed.  This led to a bitter division between the Protestant and Catholic cantons.  In October 1531, war finally broke out between Switzerland’s Catholics and Protestants.  A surprise assault on Zurich led to a devastating defeat for the Protestants.  Uldrich Zwingli fell at the forefront of the fighting.  His followers never truly recovered from the blow, and though they would continue to survive for many centuries to come, they would never again play as prominent a role in Protestantism as the Lutherans.

A few years after Zwingli’s defeat, the center of Swiss Protestant activity moved to Geneva, where it was reorganized by John Calvin.  However, the former followers of Uldrich Zwingli continued to honor his contribution to the Reformation.  The Grossmunster where Zwingli preached and was later buried was eventually appropriated by the Swiss Reformed Church.  Along with the churches of Wittenberg, Geneva and Prague, it is still revered as one of the most important sites of the early Protestant movement.

The Grossmunster of Zurich was built in the 12th and 13th centuries.  According to tradition an earlier church that had once stood on the spot was founded by none other than the Holy Roman Emperor Charlemagne.  Originally a monastery church, it was relieved of its monks and Catholic clergyman during the early years of the Reformation.  The church itself is the size of a small cathedral, with a compact rectangular layout and twin bell-towers crowned with domed steeples that were completed almost three centuries later.

The church interior, once decorated with a typical Catholic collection of statues, artwork and the like, was largely stripped bare by Zwingli’s followers.  In honor of the early Reformers the interior has been left that way, for the most part.  The Grossmunster did retain possession of a few of its treasures, including what is believed to be the Sword of Charlemagne.  A Bible that once belonged to Uldrich Zwingli is on display as well.  His tomb lies beneath the sanctuary.

The Grossmunster is located in the heart of Zurich’s Old Town overlooking the stately Munster Bridge and across the river from the Fraumunster.  The church is open April through October from 9:00am-6:00pm, and November through March from 10:00am-5:00pm.  There is no charge for admission.  Web: www.grossmuenster.ch (official website)

Zurich is home to a few other interesting Christian sites, though mostly not relating to the Reformation.  One exception is the Schweizerisches Landesmuseum, where some of Uldrich’s Zwingli’s affects and weapons are on display.  The ancient Fraumunster Abbey was seized by Zwingli in 1524 and its monastic order dissolved.  Its anachronistic modern stained glass windows were added by Marc Chagall in the 20th century.  Einsiedeln Abbey, an ancient pilgrimage church, fared better, and still has an active monastic community to this day.