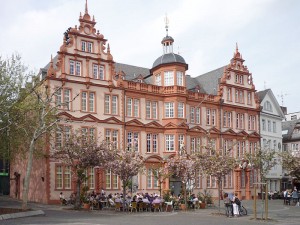 In the mid-15th century, Johannes Gutenberg, an innovative citizen of Mainz in Germany, invented the world’s first moveable-type printing press.  Sixteen years later, Gutenberg produced his magnum opus, and one of the most famous books in history: the Gutenberg edition of the Holy Bible.  According to the records of his studio, one hundred and eighty volumes of the nearly thirteen-hundred page book were produced, of which barely a fourth survive in one form or another.  These Gutenberg Bibles have become priceless treasures, highly sought after by both religious and secular collectors.  In 1900, the Gutenberg Museum was opened in Mainz, Germany.  The two copies of the venerable Bible which are on display here draw theologians and scholars from around the world to gaze with awe upon these great legacies of Renaissance literature.

It has been suggested that the greatest master of Renaissance inventors, on par with Leonardo DaVinci, was Johannes Gutenberg.  Gutenberg, who introduced the moveable type printing press to the world, laid the groundwork for the mass production of books, which in turn would not only be a cornerstone of Renaissance intellectualism but which would ultimately lead to the beginning of the Age of Enlightenment.  At the time, his printing press was hailed by many as a triumph of progress, but condemned by others as a dangerous tool.  Among the latter were high-ranking authorities of the Catholic Church, who feared the ability of the printing press to spread new ideas en masse.  Nevertheless, Gutenberg was a devout Christian, and the greatest literary triumph of his career was the production of the world’s first printed edition of the Bible.

Johanes Gutenberg was born into a wealthy merchant family of Mainz in Germany.  Among the family’s trades were goldsmithing and minting, occupations which Johanes adopted and which would later contribute to his inventions.  At some point in his early teens his family was forced to leave Mainz for reasons of safety, and relocated, probably to Strasbourg.  It was here that Johanes Gutenberg likely spent the better part of the next three decades of his life.  According to tradition, it was in Strasbourg around the year 1440 that he came up with the idea of the printing press.  In 1448, he returned to Mainz at the age of fifty, where he endeavored to put his idea into practice.  By 1450, his first press was in operation.

Ironically, one of the first major customers of the new press was the Roman Catholic Church, who contracted with Gutenberg to print up indulgences for sale.  A few years later, Gutenberg undertook what is probably the most famous printing endeavor in history: the first complete printed edition of the Holy Bible.  It is estimated that he produced about one hundred and eighty copies of this first-run edition, never imagining that these would someday become the most priceless books ever created.  Unfortunately, Gutenberg lost his printing shop and almost everything he owned when he was sued by his business partner.

Nevertheless, Johannes Gutenberg remained in the printing business for most of the rest of his life.  In 1465 he was publicly recognized for his work and granted a generous pension by the state.  By the time of his death three years later, his name had become well-known throughout Germany.  His printing press invention spread like wildfire, and by the end of the 15th century presses could be found in Cologne, Leiden, Basel, Paris, London and Venice.  The Gutenberg Bibles which he published would soon become among the most highly prized literary collectibles of all time.  On the 500th anniversary of Johannes Gutenberg’s birth, the city of Mainz established the Gutenberg Museum to honor and display his work.  It is now one of the most popular museums in the city.

The Gutenberg Museum was established in 1898 and opened in 1900.  Originally located in the Elector’s Palace, it was moved several times, before ending up in the Romischer Kaiser House in 1927.  The Romischer Kaiser House is a 17th century structure considered one of the most beautiful in the city of Mainz.  Heavily damaged during the war, it was restored in the 1950s and 1960s.  Fortunately, the museum’s collection had been moved to a safe place when Allied bombing threatened the city and unnecessary destruction was avoided.

The museum is home to an interesting collection of early printing antiquities.  Among these is a replica of Gutenberg’s original press, which is used for demonstrations.  The highlight of the museum, however, is the library and its collection of early printed books.  This includes two of the surviving forty-eight original copies of Gutenberg’s first edition Bible.  Both copies are printed on paper and are considered to be in imperfect condition.  Nevertheless these are the city’s dearest treasures for Christian visitors.  Also here is a copy of the Shuckburgh Bible, another early edition.

The Gutenberg Museum is located across the street from the thousand-year-old St. Martin Cathedral in the city center of Mainz, about a hundred miles south of Cologne and three-hundred miles southwest of Berlin.  It is open Tuesdays through Saturdays from 9:00am-5:00pm, and Sundays from 11:00am-3:00pm.  It is closed most public holidays.  The cost of admission is E5.00.  Web: www.gutenberg-museum.de (official website)

The City of Mainz was one of the earliest cities in Germany to have Christianity introduced.  The St. Martin Cathedral, also known as the Mainz Cathedral, was completed early in the 10th century and is one of the oldest in the Rhine Valley.  St. Stephen’s Church dates from the 14th century, but had to be reconstructed after World War II.  The stained-glass windows of St. Stephen’s were created by the Jewish artist Marc Chagall.