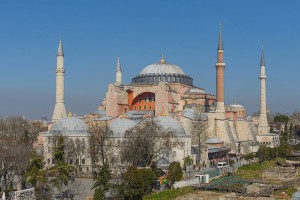 Of the original five great patriarchates of Christianity, that of Byzantium was the last to form and, for many years, was the least important.  This situation changed dramatically in the 4th century when Constantine not only legalized Christianity but also moved the capital of the Roman Empire to Byzantium.  Almost overnight Byzantium became the most important seat of the Church.  With the large Greek-speaking Christian populations of Greece and Asia Minor under his jurisdiction and direct access to the emperor, Byzantium became the defacto headquarters of the Church for several centuries.  In later years, even after many Greek Orthodox territories had fallen to Islam, the majority of Greek speaking Christians continued to recognize Constantinople as their mother church.  Today, the Patriarchate of Byzantium, now Istanbul, still clings to its heritage even as the Christian population of that city has dwindled to almost nothing.  The Church of Hagia Sofia, now a museum, is still Orthodox Christianity’s spiritual heart.  The Church of Hagia Sofia is part of the Historic Areas of Istanbul UNESCO World Heritage Site.

While Rome wasn’t built in a day, its successor, Constantinople almost was.  When the Roman emperor Constantine set out to move the imperial capital from Rome in the early 4th century, Byzantium was little more than provincial town descended from an ancient Greek city-state.  However, its highly strategic position at the crossroads of Asia, Europe, the Mediterranean Sea and the Black Sea attracted the emperor’s attention.  By 330 AD the town was renamed Constantinople and a massive building program was underway.  By the middle of the 4th century, Constantinople had rapidly grown into one of the empire’s largest cities.  This was a political boon for the Greek-speaking Christians of the eastern empire.

Shortly before the capital was moved, Christianity was officially legalized by Constantine.  In fact, the two events were somewhat related.  The location of the new capital was much closer to the Holy Land, which made it more convenient for pilgrims as well as for troops marching east to defend the area from enroaching Persians.  For Christianity, the relocation of the imperial capital to the east had both advantages and disadvantages.  On the one hand, it greatly strengthened the power and influence of the Patriarch of Constantinople.  Even though the senior Patriarch was considered to be that of Rome, the Patriarch of Constantinople was much closer to the Christian heartlands as well as to the Emperor.  On the other hand, this led to an increasing jealousy between Rome and Constantinople that would end seven hundred years later in the Great Schism of 1054.

During the early 6th century, Justinian I renewed the imperial commitment to the Patriarch by building the Church of Hagia Sofia, the largest and most spectacular church that had yet been constructed.  However, by the 7th century, after surviving hundreds of years of war with Germans, Huns and Persians, the Byzantine Empire was then faced with a new foe: Islam.  Within a few decades of the death of Mohammed, all of the Byzantine possessions in the Middle East and North Africa were swept away.  Jerusalem, Antioch and Alexandria were all taken.  Of all of the eastern patriarchates, only that of Constantinople remained free.  The Orthodox Christians then turned to Constantinople for leadership.  Unfortunately, in one of history’s greatest examples of bad timing, the Patriarch of Constantinople formally broke with the Papacy just in time for the arrival of the Seljuk Turks.

Despite aid sent from the Roman Catholic nations of the west, the schism constantly hampered the effectiveness of the Christian forces.  At a low ebb in Catholic-Orthodox relations, armies of the Fourth Crusade from France and Venice actually sacked Constantinople.  Constantinople never quite recovered from the blow, neither militarily, economically nor psychologically.  By the time the Crusades drew to a close, virtually all of the once mighty Byzantine Empire was in Muslim hands.  However, Constantinople remained free for another century.  The once nearly-supreme Patriarch ruled over an ever-shrinking Christian population in the east, which by the 15th century was dwarfed by the Roman Catholic Church.  In 1453, the Turks at last completed the conquest of Asia Minor.  Constantinople was seized, and the magnificent Church of Hagia Sofia was appropriated and put to use as a mosque.  It would remain so until the early 20th century, when it was neutralized and turned into a museum.

For the better part of a thousand years, the Church of Hagia Sofia in Constantinople was the largest and most spectacular church, and building, in the world.  The original structure was demolished in the 6th century and replaced by a magnificent domed structure in which no expense was spared.  The Church of Hagia Sofia is considered to be the penultimate example of Byzantine construction.  The staggered walls give the outer structure an almost stepped appearance, with the church’s general symmetry and sloped roofs adding to the pyramidic illusion.  The towering, red-brick entranceway is reminiscent of Islamic architectural styles.  The whole is crowned by a great silvered dome with a golden spire built after an earlier dome was destroyed by an earthquake in the 6th century.  Four towering white minarets were added to the complex in the 15th century after the Hagia Sofia was converted to use as a mosque.

The interior of the church is the architectural equal of the exterior.  Marble in staggering quantities was pillaged from other cities of the empire for its construction.  One of the most striking features of the Hagia Sofia is the tremendous number of windows in the place.  Few other churches built in the early Middle Ages could boast such an abundance of natural light.  Another feature that really makes the interior stand out is the wall-to-wall paintings and mosaics that cover nearly every square inch of surface area.  Icons of Jesus and the saints abound.  Interestingly, the vast majority of the interior artwork survived the Islamic occupation and mosque period.  Today the church consists mostly of open space used as a museum for the display of religious art and artifacts.

The Church of Hagia Sofia is located in the heart of Istanbul’s Old City right outside of the walls of the Topkapi Palace.  It has served as a museum for the better part of the last century, and is open to Muslims, Christians and anybody else who cares to peek inside.  It is open Tuesday through Sundays from 9:00am-5:00pm.  The cost of admission is US$4.50.  Web: http://ayasofyamuzesi.gov.tr (official website)

At one time, medieval Constantinople probably resembled medieval Rome in terms of the number of cathedrals, churches and Christian sites that graced the city.  But the Muslims left little of the Christian city untouched after their conquest.  Most churches were converted for use as mosques or public buildings or were simply destroyed.  Among the oldest survivors are the Church of Theotokos Pammakaristos, which once served as the patriarchal church of Istanbul, and the Chora Church, one of the oldest and most beautiful early churches of the city to have survived.  Tucked away near the Hagia Sofia is the Patriarchate of Constantinople, still hanging on after five centuries of Muslim rule.  The Fatih Mosque stands on the site of the old Church of the Holy Apostles, which once housed the relics of Andrew the Apostle, Luke the Evangelist, Timothy, John Chrysotoam and Constantine the Great.