John Knox was one of the key figures of Scottish history and one of the most pivotal leaders of the Protestant Reformation. Originally educated as a Catholic Priest, Knox embraced the Protestant ideals that were beginning to flourish in Europe during the early 16th century.  Forced into exile in 1549, he travelled to Germany and Switzerland, where he met renowned reformer John Calvin.  Upon returning to Scotland over a decade later, Knox brought with him Calvin’s ideas and established the Reformed Church of Scotland which ultimately became that country’s mainstream Protestant Church.  This ultimately migrated to the Americas in the form of today’s Presbyterian Churches.  While the exact date of John Knox’s birth is unknown, it is generally accepted as having been sometime in 1514. 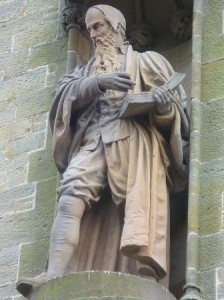 The exact date and location of the birthplace of John Knox is a matter of some conjecture.  There are no extant records of his birth, baptism or anything relating to his childhood.  Estimates for the year of his birth range from 1505 to 1515, with a best academic guess of 1514.  Evidence suggests that he was born in or near the town of Haddington outside of Edinburgh, and that he was educated at the grammar school there.

Haddington celebrates its favorite son with several memorials.  First is the John Knox Oak Tree, which supposedly marks the place where the reformist was born and where he lived during his early childhood.  Second is a statue of an elderly John Knox wielding a Bible in front of St. Mary’s Collegiate Church.

The historic town of St. Andrews was the site of some of the earliest Catholic-Protestant clashes in Scotland.  Many early reformist leaders were active in the vicinity of St. Andrews in the 1540s.  One of these, George Wishart, a mentor of John Knox, was imprisoned and burned at the stake inside the castle in 1546.  The castle was subsequently seized by Protestants, who used it as a headquarters and stronghold.  In revenge for Wishart, they killed the cardinal who was holed up in the castle.

Knox joined the rebels in the castle in 1547 and served as minister of the group for a few months. However, with the aid of French troops, Catholic royalists soon retook the St. Andrew’s Castle, badly damaging it in the process.  Despite subsequent restorations, the castle ultimately fell into disrepair. It was effectively crumbling by the 17th century.  What remains of the scenic ruins of the castle includes a dungeon where Knox and other Protestants were imprisoned for a time following the siege. 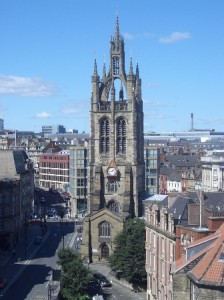 Between the capture of St. Andrews Castle and his exile to the European continent, John Knox lived under the relative protection of the Church of England in the city of Newcastle-upon-Tyne.  For some of the time that he lived there, Knox served as preacher of St. Nicholas’ Church (now known as St. Nicholas’ Cathedral or Newcastle Cathedral).  While there he also received an appointment as a royal chaplain to the king despite doctrinal differences with the Anglican communion.

St. Nicholas’ Cathedral has had something of a tumultuous history.  Despite its importance in the life of John Knox and its tangential contribution to the creation of the Church of Scotland, the church has been ravaged several times in its history by Scottish armies.  A major target of the Protestants has been the lantern tower and its famous Biblical statuary which were considered idolatrous during the turbulent era of the wars of religion. 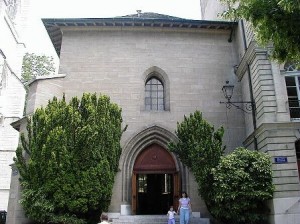 Throughout most of the 1550s, John Knox was forced to live in exile from Scotland.  During much of this time he resided in Geneva, where he where he worked with and was mentored by John Calvin, one of the two great leaders of the Protestant Reformation.  Geneva was becoming a major city of refuge for Protestant refugees from all over Europe, and eventually Knox was joined by many of his countrymen there.

From 1556 to 1559, John Knox was a regular speaker and preacher at a lecture hall adjacent to the St. Pierre Cathedral.  This hall eventually came to be known as the Calvin Auditory which is still standing today.  The auditory was restored in the 1950s and can still be visited.  Also in Geneva is the International Monument of the Reformation which commemorates a number of the Reformation’s most prominent leaders.  The centerpiece of the memorial are statues of John Calvin, Theodore Beza, William Farel and John Knox. 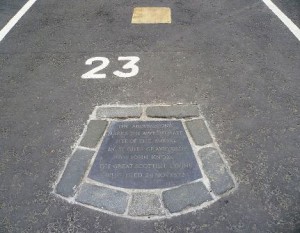 St. Giles Cathedral, also known as the High Church (Kirk) of Edinburgh, has been Scotland’s chief place of Christian worship since the Middle Ages.  In the mid-16th century it was seized from the Catholic Church for use as a Protestant institution, and became the Mother Church of the Church of Scotland (and later other Presbyterian groups around the world).  After his years in exile, John Knox served in the ministry at St. Giles Cathedral from 1560 until his death in 1572.

The city of Edinburgh is a veritable treasure trove of John Knox sites.  Many pilgrims make the cathedral their first stop.  Knox’s gravesite can be found behind the cathedral.  Sadly, and interestingly, his grave was paved over by a parking lot.  A memorial marker has since been embedded in the lot in space number 23 over the location of his body.  Also in Edinburgh is the John Knox House, where tradition holds that John Knox lived for a few months towards the end of his life.  A plaque in the nearby Warriston Close neighborhood marks an alternative (or additional) possible site of residence.