People around the world are fascinated with supernatural places. Such sites run the gamut from homes to hospitals, theaters to hotels, prisons to lighthouses, graveyards, and of course, churches.  Across America, there is no shortage of churches which claim to be haunted, and the South is no exception.  From Virginia to Texas, intrepid ghost hunters seek out the spiritual (pun intended) in churches both abandoned and active.  Not surprisingly, this is a popular pastime on Halloween. 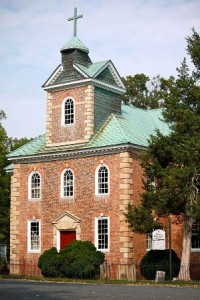 Aquia Church is an 18th century Episcopal Church located in Stafford in Northern Virginia.  In a part of the country where haunted sites are common, this one is among the most famous.  The original Anglican congregation was founded in 1680, while the current building dates back to the 1750s.  Due to funding problems, the church was closed for a time in the years after the American Revolution, and that is where the story begins.

When the building was reopened, the body of a woman was discovered in the church belfry.  Little was known about her or her cause of death, other than that it was probably violent as blood stained the floor.  Since the gruesome discovery, there have been many paranormal experiences reported within the church.  In one instance, it is claimed that a young man died while exploring the belfry one night.  One of the most common manifestations is that of a blond-haired woman appearing in an upper window. 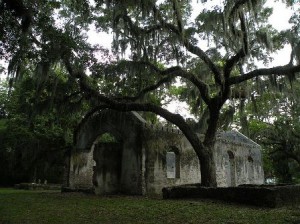 The Chapel of Ease on St. Helena Island was originally built in the 18th century as an extension of the parish church of Beaufort built for use by those working on the nearby plantations.  The chapel remained in use by the local population until the Civil War, when Union troops seized the island.  It continued to be used during and after the war by Federal forces.  A few years later the chapel was gutted by fire and never rebuilt.

On the grounds of the chapel is a mausoleum built in the 1850s for use by one W.T. White and his wife, who were interred before the war.  The vault was raided on at least one occasion, possibly disturbing those at rest within.  Efforts to block up the mausoleum entrance have been unsuccessful as the bricks are periodically removed by some force.  Among the apparitions periodically seen here are people dressed in 17th century garb.  The most famous local haunt is a woman in white carrying a child. 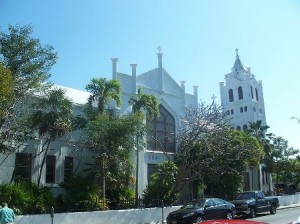 St. Paul’s Episcopal Church in Key West is considered by many enthusiasts to be the most haunted church in Florida, and appears in numerous ‘most haunted’ lists.  The congregation dates back to the 1830s, and the first church building constructed in 1839.  It had a long history of catastrophe, being destroyed or badly damaged on numerous occasions: by hurricane in 1846, by fire in 1886, and again by hurricane in 1909.

Over the years a number of spiritual disturbances have been associated with the church and its graveyard.  According to some accounts, the unknown site of the grave of the founder, John Fleming, was disturbed during one of the reconstructions.  Among the spirits claimed to have been seen here is a sea captain, a man killed by pirates, and several groups of children.  One of the groups of children are believed to have died in a fire started by a pastor of the church. 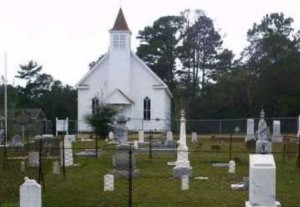 The Oakey Street Methodist Church, better known as the Consolation Church, is an inactive house of worship located in the extremely haunted town of Red Level, Alabama.  Among the extremely creepy sites in Red Level is Consolation Church which lays claim to being the most haunted church in the United States, and with good reason.  The congregation was founded in 1850, and the current building was constructed a few decades later.  Due to paranormal activity, the church was abandoned around the turn of the century.

Among the church’s many spooky manifestations are female voices which emanate from the walls of the church screaming and issuing warnings of imminent death.  There is a haunted outhouse in the back which has been known to trap those inside; regular sightings of ghosts of Confederate soldiers; and the appearance of a small boy and a small girl playing in the graveyard.  Finally, those who overstay their welcome have been known to be chased away by a phantom black Ford pickup truck.