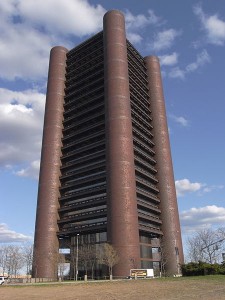 Ever since its inception, Christianity, and the Catholic Church in particular, has inspired the creation of countless religious organizations, the vast majority of which seek to carry out the work which Jesus of Nazareth charged all Christians with.  These have come in many forms, from monastic orders to missionary societies to charitable organizations.  They have built hospitals and schools; cared for the poor and sick; raised money for worthy causes.  And the most prominent of these organizations in the modern Catholic Church are the Knights of Columbus.  Founded in the United States in the late 19th century, this fraternal organization is one of the most successful charitable institutions in the history of the Church.  Their headquarters is home to a museum which boasts some of the most interesting Catholic artifacts that can be found in America.

The Knights of Columbus is one of the most unique Catholic organizations in history, and arguably the greatest contribution to the ideals of the Catholic Church to come out of the United States.  Throughout the 19th century, Irish immigrants began arriving on the shores of America in large numbers.  Despite America’s Constitutional guaranty of religious tolerance, Catholics in general and Irish immigrants in particular were often ostracized from mainstream American life.  In particular, they were often barred from unions and other institutions that provided a social safety net for its members. 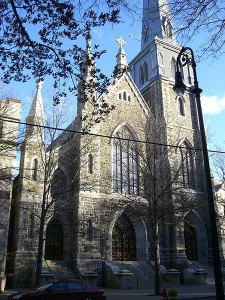 In 1881, an Irish priest named Michael McGivney decided to found an organization in order to help make provisions for Irish Catholic orphans and widows.  This was not to be monastic or missionary society made up of religious leaders, but rather a fraternal organization consisting of ordinary Catholic men.  The organization was formally established in 1882, and named in honor of Christopher Columbus, who was lauded by American society in general as a great Catholic historical figure.  This helped to both solidify interest in the fraternity among Catholics and give it legitimacy among non-Catholics.

The organization quickly grew, and by the turn of the century it was the most prominent and important Catholic organization in America. It would later expand beyond the Irish community and into immigrant communities from other Catholic countries.  During the 1910s and 1920s, the Knights of Columbus became a political target, with rumors circulated that their true secret mission was to fight Protestantism, among other things.  These rumors proved utterly baseless, and by the mid-20th century the Knights were among the most well-respected service organizations in the United States. 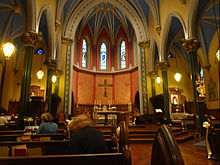 The Knights of Columbus were also among the first major organizations to support integration.  Although the 1950s saw much divisiveness over the issue, by 1964 the Knights fully opened its doors to black candidates as long as they were Catholic.  Today the Knights of Columbus is one of the world’s largest organizations of any sort.  It boasts nearly two million members in over a dozen countries, and its philanthropic activities are among the most successful anywhere.

The Headquarters of the Knights of Columbus actually consists of a trio of sites, all located near each other in downtown New Haven.  The headquarters itself, and actually the least interesting place from a visitor standpoint, is a 25-story skyscraper with round towers at the corners which sort of give it the look of a strange, top-heavy glass and steel castle.  Far more interesting is St. Mary’s Church, the beautiful 19th century structure where the first meeting of the Knights was held in 1881.

But the most popular site of the three is the Knights of Columbus Museum.  This Lego-like modern structure is home to some of the finest exhibits of Catholic interest in America.  Among the galleries are exhibits on the history of the Knights of Columbus, the Vatican and Christopher Columbus, as well as the reliquary of Father McGivney.  Probably of greatest historic interest is the cross that once crowned St. Peter’s Basilica in Rome for over four centuries.

The Headquarters of the Knights of Columbus is located in downtown New Haven, approximately 75 miles northeast of New York City.  Both the church and museum are close by.  As of this writing no visitor information was available for the actual headquarter building.  St. Mary’s Church is open Mondays through Fridays from 8:30am-4:00pm (closed for lunch from 1:30pm-2:00pm).  The Knight’s Museum is open daily from 10:00am-5:00pm.  There is no charge for admission to either location.  Web: www.kofc.org (official website)

New Haven is home to one of the oldest Catholic communities in New England, and St. Mary’s Church, where the Order of Columbus was founded, is the second oldest in Connecticut.