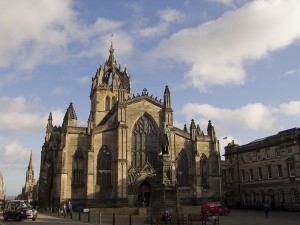 The High Kirk of Giles is the greatest church in Edinburgh, the chief house of worship of the Church of Scotland and the spiritual headquarters of the worldwide Presbyterian community.  Originally the Catholic Cathedral of St. Giles, the church was seized by the Protestants in the 1550s.  It is also unofficially the church of the monarchy in Scotland.  The Chapel of the Order of the Thistle, the Scottish knightly order, is also located here.  While the High Kirk lacks the hierarchal importance of other major denominational centers such as Rome or Canterbury, the legacy of John Knox makes Edinburgh Scotland’s most important religious center.  The High Kirk of Giles is part of the Old own of Edinburg UNESCO World Heritage Site.

Several years after the Reformation had been set in motion in Central Europe, the Protestant ideal began to spread to religious reformers in Scotland.  During the 1540’s a priest named John Knox left the Catholic Church and devoted himself to the Protestant cause in Scotland, which soon flourished.  Because the Catholic Church had been dealt such a heavy blow by Henry VIII in neighboring England, the Papacy was at first in no condition to deal with the Scottish reformers.  However this changed during the reign of the very devout Catholic, Queen Mary.  Around 1546 AD foreign Catholic mercenaries were brought in to deal with the Protestants.  John Knox was captured and enslaved for two years, but he eventually made his way to Geneva where he sought shelter among the Calvinists.  He remained in exile until 1559, when he deemed it necessary to return to Edinburgh.

By that point a showdown was imminent between Scotland’s Catholics and Protestants.  However, by then the Anglicans were once again dominant in England, and with their help the Protestants of Scotland gained the upper political hand.  In 1560 the Scottish Parliament declared Protestantism to be the officially recognized religion of the State.  Despite this victory, enmity between the two groups continued, particularly during the reign of Scotland’s Queen Mary.  But for the most part the two sides avoided coming to blows.  During this time John Knox became the minister of the Kirk of Giles and the de-facto leader of the Scottish Protestants.  By the time of his death in 1572, Knox and his associates had solidly established the Church of Scotland, a Presbyterian institution along Calvinist lines.

During the next century, the Church of Scotland and the Church of England maintained an uneasy alliance, despite the severe doctrinal differences between the two.  Their joint objective was to keep the British Isles free of Papal influence.  After the overthrow of King James II in 1690, the Church of Scotland became separated from the country politically.  The weakening of the Edinburgh leadership led to the church’s fragmentation, and soon there were dozens of Presbyterian demoninations flourishing throughout the country.

By the 20th century, the Church of Scotland had been reduced to a relatively small denomination.  However, Presbyterian Churches throughout the world number in the tens of millions of adherents, and these generally recognize the Church of Scotland as their ancestral church.  The High Kirk of St. Giles in Edinburgh is still the parish church of the City of Edinburgh, and because of its historical importance retains the honorary moniker of Cathedral.  Today it is one of Scotland’s most visited churches and welcomes hundreds of thousands of Presbyterian pilgrims every year.

The original 12th century cathedral was destroyed by a fire in 1385.  A new church was built during the next century, and was largely completed just in time for the Reformation.  Fortunately, the transition from Catholicism to Protestantism was relatively violence-free, and most of the current structure dates from this 15th century reconstruction.  The brown-brick cross-shaped structure towers over Edinburgh’s narrow streets.  The bell tower is crowned with an onion-shaped type structure that if filled in would be reminiscent of dome styles found in Eastern Europe.

The large vaulted interior is typical of its period of construction.  St. Giles is known in particular for its extensive and beautiful collection of stained-glass windows, as well as its numerous chapels.  The most famous chapel is that of the Order of the Thistle.  This chapel was rebuilt in the early 20th century and is richly decorated.  Its use is reserved, in theory, for members of the Order and the British monarch.  Most of the stained-glass windows date from the 19th and 20th centuries.  One of the most famous is the Burne-Jones window which depicts a trio of Biblical heroines.  The Tomb of John Knox is outside of the Church, ignominiously paved over by a parking lot.

The High Kirk of Giles is located in the heart of Old Edinburgh about a third of the way down the Royal Mile from Edinburgh Castle.  It is open October through April from 9:00am-5:00pm and May through September from 9:00am-7:00pm (opening time on Sundays is at 1pm).  There is no charge for admission, though donations are encouraged.  Web: www.stgilescathedral.org.uk (official website)

Edinburgh has a wealth of Reformation-era churches and sites.  The Greyfriar’s Church, just down the road from St. Giles, dates back to the 16th century.  The Canongate Church, at the far end of the Royal Mile from Edinburgh Castle, is the resting place of one of the world’s great economic religionists, Adam Smith.  Also on the Royal Mile is the John Knox House.  This house, where he died, is now a museum dedicated to his life and activities with the Church of Scotland.