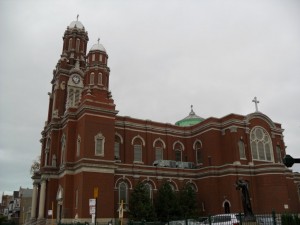 The United States is home to nearly eighty basilicas, Catholic churches designated by the Vatican for having special religious and historical significance.  Only two cities in America claim three or more basilicas: New York (which are technically split between Manhattan and Brooklyn), and Chicago.  The latter enjoys all three basilicas inside Chicago proper, making it one of the most important Catholic pilgrimage cities in the United States.  These basilicas span the 20th century, a golden age for the church in Chicago: the Basilica of Our Lady of Sorrows, the Basilica of St. Hyacinth, and the Queen of All Saints Basilica.

Chicago was one of the magnets for immigrants in the late 19th century.  After the Great Fire destroyed much of the city in 1871, Chicago was quickly rebuilt by new arrivals pouring into the Midwest.  In thirty years the population grew from 300,000 to 1.7 million, the fastest any city had grown in history.  This was due in large part to the huge numbers of immigrants from Germany, Poland and Central Europe, most of whom were Catholic. 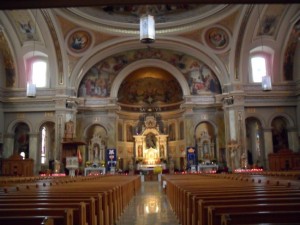 The arrival of such huge numbers of Catholics in such a short time led to the establishment of an archidiocese in Chicago and one of the biggest church construction booms in history.  Among the largest churches built at the turn of the century was Our Lady of Sorrows.  This church, completed in 1902, became well known thanks to its early use of radio broadcasts to reach parishioners.  It was designated as a basilica in 1956.

In 1894, the Catholic Church designated a Polish parish in Chicago.  That parish became to home to some of the most definitively Polish-style churches in the United States.  One of these, St. Hyacinth completed in 1921, became the religious center of Polish American life and has been visited by many dignataries.  Among these were Lech Walesa and future Pope John Paul II, as well as for President George Bush Sr.  It was designated as a basilica in 2003. 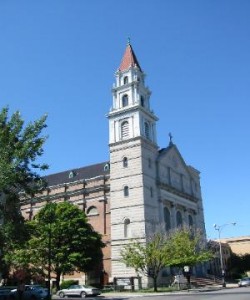 The last of Chicago’s major churches, the Queen of All Saints, was necessitated by the expansion of Chicago’s Catholic population into the city’s outlying areas, especially after World War II.  The church was completed in 1960, and quickly became famous for its connection to eight different incarnations of the Virgin Mary representing famous Marian shrines around the world: Czestochowa (Poland), Knock (Ireland), Einsiedeln (Switzerland), The Snows (Romania), La Salette and Lourdes (France), Fatima (Portugal) and Guadalupe (Mexico).  In 1962, a mere two years after its completion, the Queen of All Saints was designated as a basilica.

The Basilica of Our Lady of Sorrows was built in 1902.  A rare Italian Renaissance style cathedral, it is one of the largest churches in the Midwest, with what is possibly the most beautiful sanctuary in Chicago.  It is famous for its exquisitely decorated barrel vaulted ceiling, unsupported by independent columns.  Our Lady of Sorrows is located on the west side of Chicago approximately three miles from the city center.  Web: www.ols-chicago.org (official website). 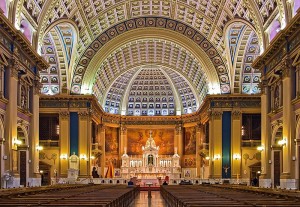 The Basilica of St. Hyacinth, arguably the most historic of the three basilicas, was completed in 1921.  It is the definitive Polish cathedral of Chicago, built in Classic Revival style then popular in Central Europe.  The façade is known for its three bell towers, a rarity in American church construction.  The interior is awash in rich artwork, especially statues of saints from around the world.  The central draw is an icon of Our Lady of Czestochowa that was a gift from Poland and blessed by Pope John Paul II.  Our Lady of Sorrows is located approximately five miles northwest of downtown Chicago.  Web: www.sthyacinthbasilica.org (official website).

The Queen of All Saints Basilica is a Neo-Gothic structure completed in 1960.  Dedicated to the Virgin Mary, it is venerated for its association with eight famous Marian shrines around the world.  The artistic centerpiece of the church is a famous iconic painting of the Virgin Mary behind and over the main altar.  The Queen of All Saints is located on the northern outskirts of Chicago approximately ten miles from the city center.  Web: www.qasparish.org (official website). 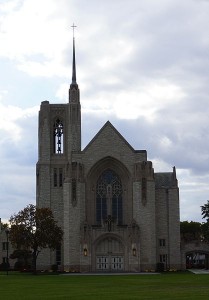 Although not one of the three basilicas, the seat of Chicago’s archdiocese is the Holy Name Cathedral, which was built after its predecessor was destroyed in the Great Fire.  The Basilica of St. Hyacinth anchors a neighborhood crowded with other impressive Catholic institutions, most notably the St. Wenceslaus Church.