In October 1492, Christopher Columbus’ first expedition to the Indies unexpectedly brought him to the islands of the Caribbean Sea. After briefly stopping on an unknown island in the Bahamas, Columbus and his men found their way to Cuba where they made their first major landfall in the New World. It was in Cuba that Columbus erected the first Cross in the Americas, and where the first local peoples were converted to Christianity. From these very humble beginnings, the Catholic Church ultimately spread to every corner of the Spanish Empire in the New World. Today the history of the Church in Cuba is reflected in its many beautiful churches and cathedrals, some of the oldest in the Western Hemisphere. 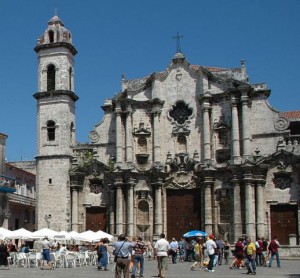 The Cathedral of the Virgin Mary of the Immaculate Conception, also known as the Havana Cathedral, is Cuba’s national cathedral and one of the most historic and distinctive buildings in the capital. Arguably the most magnificent Roman Catholic Church to be found on any island in the Caribbean, it is one of the best examples of Spanish Colonial Baroque architecture in Cuba.

Although it stands on the site of an earlier much smaller church, the current cathedral was completed in 1777. Originally constructed for use by the Jesuits, it was turned over to general Church jurisdiction before it was finished. From 1796 to 1898, the cathedral housed the mortal remains of Christopher Columbus (these were removed to Spain after the Spanish-American War). The Havana Cathedral is a UNESCO World Heritage Site.

National Shrine Basilica of Our Lady of Charity of El Cobre

Web: www.marypages.com/ladycaridaddelcobre (official website of Our Lady of Charity) 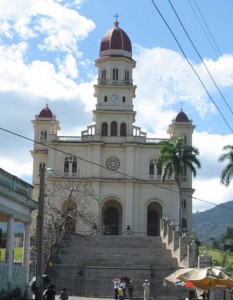 National Shrine of Our Lady of Charity (wikipedia.com)

The National Shrine Basilica of Our Lady of Charity of El Cobre is Cuba’s preeminent Marian shrine and the only designated basilica minor on the island. It is the main site of veneration in the world for Our Lady of Charity. According to tradition, the story of Our Lady of Charity dates back to the early 17th century, when sailors threatened by a storm were saved just before discovering the icon of the Virgin floating in the ocean.

The statue was brought to Cuba and instantly became an object of veneration. Over time the Church ultimately recognized the sanctity of the icon and named her the patroness of Cuba. The National Shrine was constructed in 1926, making Santiago de Cuba the island’s preeminent Catholic pilgrimage site. The church was consecrated as a basilica minor in 1977. It has been visited by Popes John Paul II and Benedict XVI. 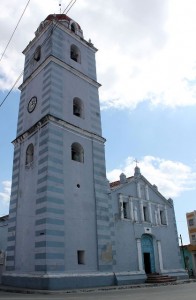 The Parroquial Mayor Church in Sancti Spiritus is considered to be, by some measures, the oldest church currently standing on the island of Cuba. The city of Sancti Spiritus was among the earliest cities founded in Cuba (it is possibly the second oldest after Baracoa). Established barely a decade after Columbus’ last voyage, it was part of the first major wave of Spanish conquest and settlement in the Americas.

The city’s original wooden church was constructed in 1522, the first to be built on the island, and among the first half-dozen to be erected in the Spanish territories of the Caribbean Sea. The original church was removed in 1680 and replaced with a more permanent stone structure. However, the foundation and some other of the original elements were incorporated into the building which is still standing and which underwent major renovations in 2014.

Cathedral of Our Lady of Asuncion (Cruz de la Parra) 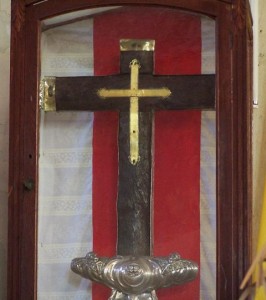 The Cathedral of Our Lady of Asuncion is a 19th century church that is home to one of the most important religious artifacts in the Americas: the Cruz de la Parra. According the most accepted account, it was at Baracoa on the eastern tip of the island that Christopher Columbus first set foot on Cuba, the first major landmass he visited in the New World. Though none of Columbus’ crew remained at the site, it was given a name: Porto Santo. More importantly, the site of the landing was marked with a wood-hewn cross, the Cruz de la Parra.

The Cruz de la Parra, despite being left out in the open for decades, managed to survive (it is the only cross left behind by Columbus to do so). Though recent scientific research indicates that the cross was made from native wood and did not come from Europe, carbon dating did place it’s completion around 1500. It is thus the oldest verified Christian artifact in the entire Western Hemisphere. It is now kept on display in the cathedral. 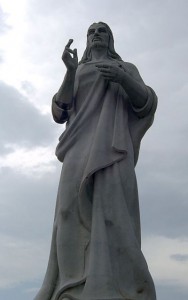 The Old City of Havana is absolutely packed with beautiful churches, many of which are worth a peak. But for history, perhaps the best one in the city is the Iglesia del Espiritu Santo, or Church of the Holy Spirit. Built in 1632, it is the oldest standing church in Cuba’s capital, and though founded at a later date, has been intact almost a half a century longer than the Parroquial Mayor Church in Sancti Spiritus.

Along the north side of the Old City is the Canal de Entrada which gives access to the Havana Port. On the far side of the canal, crowning a low hill, is one of Havana’s most memorable Catholic sites: the Christ of Havana. This towering white marble statue clocks in at 66 feet in height and was consecrated by Pope Pius XII in 1958. The head of the statue was destroyed by lightning on the day Fidel Castro’s forces occupied Havana in 1959. It has since been repaired.