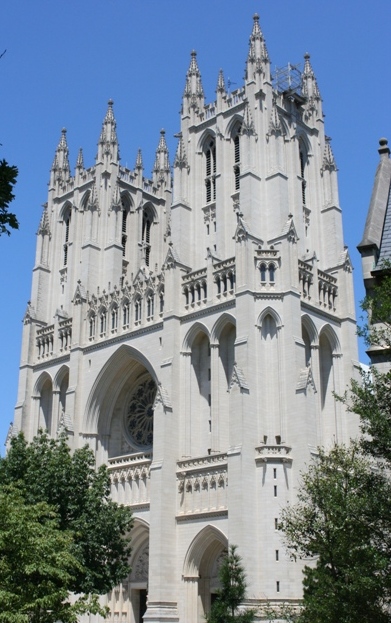 Washington DC, the capital of the United States, receives millions of visitors every year.  People come from all over the world to see the historic government district, with its immense, stately buildings, museums and monuments.  What most visitors to Washington do not often see are its equally magnificent religious buildings.  This is due in large part to the fact that there are virtually no churches, cathedrals, synagogues or similar institutions located within a half mile of the National Mall, where most visitors spend most of their time.

This is a shame, as Washington is home to some of the largest and most magnificent houses of worship in the United States, including some record setters.  Although most of these are not national institutions in any official sense, many of Washington’s largest churches serve as de-facto state churches, where American politicians and foreign dignitaries attend services, and where state events such as funerals are typically held.

The major sacred places of Washington DC can be found in several clusters.  The first major cluster is on the northwest side of the city, and is anchored by the Washington National Cathedral.  Officially known as the Cathedral Church of St. Peter and Paul, the Washington National Cathedral is an Episcopal institution and is one of the largest non-Catholic church buildings in the world.  A modern gothic masterpiece, its brilliant white façade replete with triple doors and flanked by two soaring bell towers is strikingly reminiscent of Notre Dame in Paris.  Among those buried here are 28th President Woodrow Wilson and Helen Keller.  The WNC is the de-facto state church of the United States.

Around the corner, about a quarter of a mile away along Massachusetts Avenue, are two of the major Orthodox churches of the city.  The first is St. Sophia Cathedral, seat of the Greek Orthodox Diocese of Washington DC.  Right next door to that is the immense St. Nicholas Cathedral.  This massive church is the world headquarters of the autocephalous Orthodox Church in America.  Its immense dome and ceiling feature some of the city’s most beautiful iconic artwork.

A little less than a mile further northwest of the WNC on Nebraska Avenue is the National United Methodist Church.  Technically made up of churches at several locations, this is the main site of the Methodist church in the capital.  Closer in to the city center, about halfway between the National Cathedral and the Mall along Massachusetts Avenue, is the Islamic Center of Washington.  This mosque, the largest in the United States, was built on Embassy Row in order to serve the local community of Muslim diplomats and visiting dignitaries.  It is architecturally noteworthy, especially for its graceful minaret and its immense prayer hall.

The second cluster of major churches is located just north of the White House.  This group is anchored by the Cathedral of St. Matthew the Apostle.  This beautiful old cathedral is the seat of the Roman Catholic Archdiocese of Washington DC.  A few blocks to the northeast is the First Baptist Church.  This church is home to one of the oldest Christian congregations in Washington, although they have only occupied the current site for a little over a century.

A few blocks south of St. Matthew’s is St. John’s Episcopal Church.  Located just across the street from the front of the White House, this is one of the oldest and arguably the most historic church in the city.  It has been nicknamed the ‘Church of the Presidents’, as every president since James Madison has worshipped here.  Abraham Lincoln famously came here often to pray during the American Civil War.

A few blocks west of St. John’s is the New York Avenue Presbyterian Church.  Although the church only dates to the mid-20th century, the congregation can trace its roots back to the early 1800s.  The final stretch of the tour is a one mile journey further east to the Lilian and Albert Small Jewish Museum.  This recently completed museum incorporates the structure of the original Adas Israel Synagogue, the oldest synagogue in the capital.

While most of Washington’s most historic houses of worship can be found in the two aforementioned clusters, there is one major outlier worth mentioning.  The Basilica of the National Shrine of the Immaculate Conception, located in northeast Washington, is the largest Catholic cathedral in the United States.  Thanks to its soaring, Faberge-esque dome, it is also the tallest building in the city.  The basilica is regularly attended by many prominent Catholics and visiting dignitaries, and is a regular stop on Papal tours to the United States.  John Carroll, a prominent early Catholic and signer of the Declaration of Independence, is buried in the crypt beneath the church.