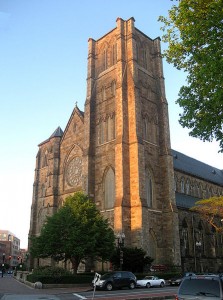 In the middle of the 19th century, Catholic immigrants, mostly from Ireland, began swarming into New England.  Over the course of a few decades traditionally Protestant Boston found itself bustling with a large Catholic population, and a renaissance of church construction overtook the city.  Some of the finest Catholic churches and cathedrals in Boston were built at this time, while other older churches were acquired from other denominations for Catholic use.  Among Boston’s most historic Catholic institutions are St. Stephen’s Church, the Cathedral of the Holy Cross and the Basilica of Our Lady of Perpetual Help.

Immigration from Ireland to the Americas began as early as the 17th century, beginning as a trickle and increasing in the 1820s.  However, under the impetus of the Great Famine in the mid-19th century, hundreds of thousands crossed the Atlantic.  After New York City, the primary destination for these immigrants was Boston, which soon found itself burgeoning with a large Irish, and consequently Catholic, population. 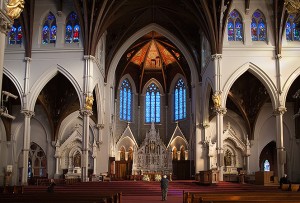 By 1850, nearly forty thousand Irish immigrants had settled in Boston.  To accommodate their religious needs, new Catholic parishes were established in the city.  To address initial needs, older existing churches were acquired from other Christian communities.  Perhaps the best known of these was St. Stephen’s Church in North Boston, which was purchased from Unitarians in 1862 and remained an active parish until the end of the 20th century.

In 1803, Boston’s first Catholic cathedral, Holy Cross Church, was designed and built by famed architect Charles Bulfinch.  By 1860 this church was deemed too small and outdated to serve the growing Catholic community as its cathedral, so a new building was constructed.  The magnificent Cathedral of the Holy Cross was completed in 1875, and has served as Boston’s main cathedral ever since.  Holy Cross enjoyed a moment in the national spotlight on October 1, 1979, when it became the first church in the United States to be visited by Pope John Paul II. 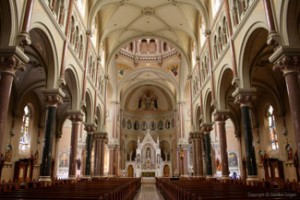 Around the same time that Holy Cross was under construction, the Redemptionist Fathers, a catholic religious order, established a temporary mission church in Boston.  A permanent church dedicated to Our Lady of Perpetual Help was completed a few years later in 1878.  In 1956 this church was designated as Boston’s first and only basilica.  Closely associated with the Kennedy family, it hosted the funeral of Edward Kennedy in 2009.

The Cathedral of the Holy Cross is the chief Catholic institution of Boston and its most magnificent Catholic church.  A hulking Gothic Revival masterpiece completed in 1875, the exterior is iconic due in part to its single belltower as the second one was never completed.  The sanctuary is the largest of any church in Boston.  The Cathedral of the Holy Cross is located in the traditionally Irish Catholic South End of Boston, about a mile from the city center.  Web: www.holycrossboston.com (official website).

The Basilica of Our Lady of Perpetual Help, locally known as the Mission Church, is the centerpiece of what was once a complex of monastic and educational institutions.  Completed in 1878, it is architecturally famous for its unusual and iconic spires, which can be seen throughout the neighborhood.  Due to a slope in the hill, one spire is unintentionally two feet higher than the other.  The taller spire, at 215 feet, is the same as the length of the church.  The Basilica of Our Lady of Perpetual Help is located in the southwest outskirts of Boston, a little over two miles from the city center.  Web: www.bostonsbasilica.com (official website).

St. Stephen’s Church was originally completed in 1804 and is the last surviving church designed and built by Charles Bulfinch.  This red-brick, Early Republic style building is famous for having been restored and moved not once, but on a several occasions, including being raised and later lowered!  No longer a parish church, it is still an active Catholic church now used by a local missionary society.  St. Stephen’s Church is located in Boston’s historic North End just outside of the historic district.  Web: www.bostoncatholic.org (official website of the Archdiocese).

Although the original cathedral is long gone, a commemorative plaque on Franklin Street marks the location of the Old Cathedral of the Holy Cross.