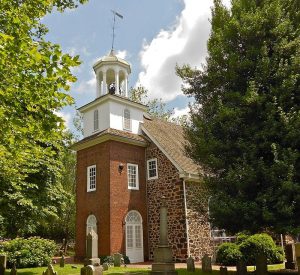 In 2017, Lutherans and other Protestants from around the world celebrated one of the most important religious and historic anniversaries of the 21st century: the 500th anniversary of Martin Luther’s 95 Theses, which kicked off the Protestant Reformation and a new age of western civilization.  In honor of this event, The Complete Pilgrim is visiting some of the most historic Lutheran churches to be found in the United States.  For those who couldn’t make it to Germany, here are five alternatives that can be visited on this side of the Atlantic:

Gloria Dei Church is the oldest standing church in Pennsylvania and the second oldest Lutheran church in the United States.  Among the many national and religious groups to arrive in the Philadelphia in the mid-17th century were Lutherans from Sweden, the first Scandinavians to settle in the United States.  In 1677 a Lutheran congregation was formally established in the city.  The Swedish Lutherans met for many years at a temporary worship facility before they finally built their own church in 1700.  The Lutheran community used this church continuously until 1845, when it was acquired for use by an Episcopal congregation.

Old Swedes Church is one of the oldest surviving buildings in Philadelphia and possibly its best preserved early 18th century structure.  It is home to a small collection of rare early Bibles in Swedish.  A memorial to John Hanson, ninth president of the Continental Congress, is on display in the church graveyard.

The Augustus Lutheran Church is the oldest Lutheran church in continuous use in the United States.  Completed in 1743, it is one of the oldest churches in Pennsylvania.  It also played a small role in the American Revolution.  The first German Lutherans to migrate the American colonies began arriving in the 1730s.  In 1745 the first German-Lutheran church was completed in Trappe.  During the American Revolution it served as a makeshift hospital for the Continental Army.  The church was replaced by a larger structure in 1852.  The old church was maintained by the congregation for other uses, and periodically renovated.

Augustus Lutheran Church was designed by Henry Muhlenberg, a pastor, resulting in an odd style that looks like a colonial barn that has been cut in half. Muhlenberg is buried in the church graveyard.

The Holy Trinity Church of Wilmington, also known as Old Swedes, is the oldest Lutheran-built church still standing in the United States. It is also among the oldest churches in continuous in America.  The tiny colony of New Sweden, located along the Delaware River, was established in 1638.  A few decades later New Sweden was absorbed into the Dutch colony of New Netherlands, and soon thereafter into the British colonial system.  Despite this the tiny Lutheran community survived, thanks in part to the close relations that Britain shared with the Protestants of Germany, who for the most part were Lutheran.  In 1698 they built the New Trinity Church in Wilmington on the site of the old burial ground of Fort Christina.  The Lutherans sold the church to the newly formed Episcopal Church in 1791.

Holy Trinity Church is one of the oldest brick buildings still standing in the United States. The main building is built of hewn stone, with a red-brick bell tower that dates from a later period.  The church interior is noteworthy for its brilliant, vibrantly colored stained glass window featuring the holy family, set amidst an otherwise completely whitewashed interior.  The grounds of the church are also home to the original church burial yard, meditative labyrinth and the Hendrickson House, a 17th century farm that is now run as a museum.

Zion Lutheran Church in Cleveland is a stately old church with an interesting claim to holiday fame.  It is believed to have been the site of the first Christmas tree erected by a congregation inside of a church.  The location and party responsible for America’s first Christmas tree is a matter of some conjecture.  But the earliest known documented, fully decorated Christmas trees appeared in the area of Cleveland around the mid-19th century.  In 1851 a pastor named Heinrich Schwan placed a Christmas tree inside the Zion Lutheran Church.  The tree, which initially caused a scandal, kicked off a craze the following holiday season.  In 1852, the festive trees appeared all over Cleveland.

Zion Lutheran Church is not only home to one of the oldest Lutheran congregations in the Midwest but also one of its oldest schools. The neighboring Zion Lutheran School is also listed on the National Register of historic Places.  The church maintains its annual tradition of raising a Christmas tree to this day.  A small monument marks the spot a few blocks away where the original Christmas tree stood.

Chapel In The Hills

The Chapel in the Hills is a Norwegian style stave church, something that is extremely rare outside of Scandinavia.  Lutheran settlers arrived in the area of Black Hills in the 1870s.  Many of these were immigrants from Norway who came to South Dakota as prospectors and farmers.  In the 1960s, Harry Gergerson, a popular Lutheran minister, decided to make Rapid City the base for his ministry and radio show, Lutheran Vespers.  To house his ministry, and to honor the Norwegian heritage of the area, Gergerson oversaw the construction of the Chapel in the Hills, a close replica of the 12th century Borgund stave church in Norway.  It served as home to Lutheran Vespers from its completion in 1969 until 1975.  Today the chapel is a popular tourist destination in Rapid City and is used to host weddings and other events.

The Chapel in the Hills is a breathtaking four story stave church that seems to have been lifted straight out of Norway’s fjord country. The original blueprints, provided by the Norwegian Department of antiquities, were used in its design, and traditional craftsman techniques in its construction.  The site is also home to an original 19th century log cabin as well as a visitor’s center.