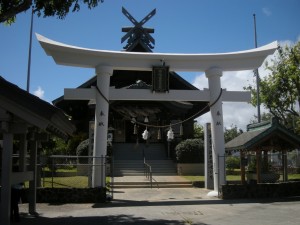 Shintoism, the traditional belief system and religion of Japan, has been around for over two and a half millennia.  It was introduced to the United States at the turn of the 20th century, in the Hawaiian Islands.  The city of Honolulu boasts the oldest Shinto communities outside of Japan, and the oldest shrines in Hawaii.  Of these, the most important and popular are the Izumo Taishakyo Mission and the Hawaii Kotohira Jinsha.

Shinotism dates back to the 7th century BC, and it was a cornerstone of life for the Japanese people over the course of their entire history.  Due to Japan’s traditional policies of isolation, which were especially pronounced during the Colonial era, Shintoism remained exclusive to the Japanese islands.  This did not change until the latter half of the 19th century, when Japan, largely under threat, was forced to open up to the United States and other Western powers.

The opening of Japan to western trade, had the effect of also opening America to Japanese immigration.  The first Japanese settlers began arriving in America in the 1860s.  The first large waves of immigrants began in 1885, when many Japanese farmers relocated to Hawaii and California, primarily to work on plantations and produce farms.

By 1900, the Japanese community of Hawaii had grown large enough to necessitate the establishment of Shinto institutions.  The first of these was the Izumo Taishakoy Mission, founded in 1906, among the earliest Shinto sites built outside of Japan.  The first major Shinto shrine, the Hawaii Kotohira Jinsha, was founded a few decades later in 1924.

These and other Shinto shrines served the Japanese community of Honolulu until the outset of World War II.  Immediately after the attack on Pearl Harbor, these shrines, along with all other Japanese institutions, were shut down, and the local population sent to interment camps.  Although the camps were closed after the Japanese surrender, some of the shrines were not reopened until well after the war.  Now all open, the Shinto Shrines of Honolulu are among the finest traditionally Asian religious sites in the United States.

The Izumo Taishakyo Mission of Hawaii is one of the oldest Shinto shrines outside of Japan.  Dedicated to the deity Okuninushi-no-Mikoto, the small but beautiful temple was inspired by the classical architecture of Taishi Machi in Shimane, Japan.  The shrine is fronted by an iconic white gate (with the remainder strangely surrounded by a chain link fence).  The Izumo Taishakyo Mission is closely associated with the Japanese New Year’s Day celebration.

The Hawaii Kotohira Jinsha-Hawaii Dazaifu Tenmangu (full name) is the largest and arguably the most beautiful Shinto temple in Honolulu.  A magnificent traditional Japanese structure, it enjoys a marginally more suburban and green setting than the mission, and is arguably the more serene of the two sites.  It also is guarded by an iconic white gate, without the chain link fence.

Almost all of America’s Shinto shrines are in Hawaii, and more than half of these are in Honolulu.  In addition to the two main shrines, other standouts include the Daijingu Temple of Hawaii and the Hawaii Ishizuchi Jinja.  The most important Shinto site on the mainland is the Tsubaki Grand Shrine of America in Washington State.