When it comes to historic synagogues in the United States, New York City is the undisputed champion. But the city does not hold a monopoly on amazing Jewish sites.  Scattered across the Northeast and Midwest are many synagogues worth seeing for their history and impact on local cultures.  From Newport, which boasts a synagogue as old as any in New York, to Philadelphia, heart of American Judaism during the Revolution, to Cincinnati, from which Jewish communities began the long expansion westward, explore some of America’s greatest synagogues beyond the confines of Manhattan and Brooklyn. 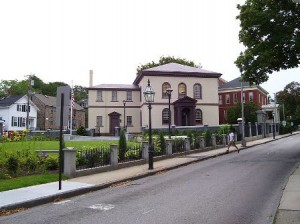 The Touro Synagogue in Newport has the honor of being the oldest synagogue still standing in the United States.  Although Jewish immigrants of the 17th centuries arrived in Charleston and New York first, the first congregation in what would later be the United States was formally established in Newport in 1658.  These immigrants came from Brazil following the loss of that region by the tolerant Dutch to the less tolerant Portuguese.  They arrived via New Amsterdam, where the local Dutch government delayed in recognizing their status to settle.

Because of this brief delay, the Jewish community of Newport was formally established just before that of New York.  Although there were earlier synagogues, the congregation constructed the current building, the Touro Synagogue, a century after their arrival.  For many years it was the center of Jewish life in New England.  For much of the 19th century, the synagogue was closed due to lack of membership.  Although its ownership passed to Shearith Israel in New York, it was famously cared for by neighboring Quakers for decades.  It became active again in the 1890s due to new waves of immigrants from Europe, and has been active ever since.  The building is currently being incorporated into an historic district. 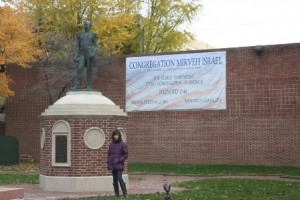 Congregation Mikveh Israel has one of the most colorful histories of any Jewish congregation in the United States.  The congregation traces its roots back to the 1740s, and many of its members were actively involved in the independence movement of the mid-18th century.  At least a few were known to be members of the Sons of Liberty.  Among those who contributed funds to construct the congregation’s first synagogue was none other than Benjamin Franklin.

During the American Revolution, one of its members, Haym Solomon, was instrumental in financing the fledgling American government and war effort.  He also served as a spy and later helped to prepare drafts of the Constitution.  Other members of the congregation also went on to serve in the American army with distinction, including Philip Moses Russell, a prominent surgeon.  While the original synagogue is long gone, these men, and nearly two-dozen others who served in the Continental Army, are now buried in the synagogue’s graveyard, which is counted among Philadelphia’s key Revolutionary War sights. 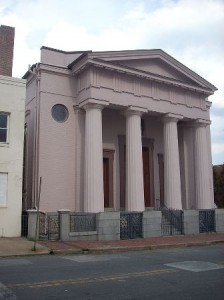 The Lloyd Street Synagogue is the third oldest synagogue still standing in the United States.  It was originally constructed for use by the Baltimore Hebrew Congregation, who occupied the building for most of the 1800s. It briefly served as a parish church for Catholic immigrants from Lithuania at the turn of the century before once again becoming a Jewish synagogue.  It remained an active religious institution until 1963.

The synagogue, one of Baltimore’s best examples of Greek Revival architecture, was nearly torn down before being declared a national historic site.  It is now run as a museum, along with neighboring Chizak Amuno Synagogue, by the Jewish Museum of Maryland.  Among its archaeological treasures is a recently rediscovered Mikveh located beneath the sanctuary.  This is believed to be the oldest ritual bath in the United States. 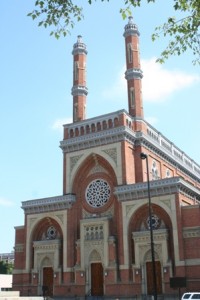 The Plum Street Temple has its roots in an earlier congregation, Shearith Israel, the first Jewish synagogue west of the Alleghany Mountains.  The Jewish community of Cincinnati, which dates from the first half of the 19th century, was instrumental in spreading Judaism into the Midwest and ultimately towards the Pacific Coast.  The original Shearith Israel Synagogue was active for only a few years.  Interestingly, the building is still standing and has been converted to use as a housing development.

Just after the Civil War, the community built the Plum Street Temple, at the time of the most magnificent Moorish-style structures in the United States.  It was constructed under the auspices of one of America’s most famous rabbis, Isaac M. Wise.  Wise, who was instrumental in establishing Reform Judaism in the United States, also went on to found Hebrew Union College, one of the world’s foremost Jewish seminaries.  Plum Street Temple was later renamed the Isaac M. Wise Temple in his honor. 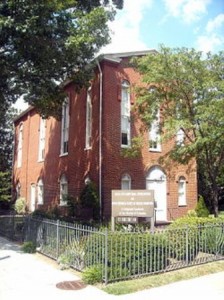 The Adas Israel Synagogue is the oldest synagogue standing in the nation’s capital and one of the oldest in the United States.  The building has an interesting history.  Completed in 1876, it was only in used for three decades before the congregation moved to a larger space.  The building was moved on a single giant flatbed vehicle to its current location in 1969 due to area redevelopment.  A second move is again being planned for the same reason.

Adas Israel had a brief moment of fame at the time of its opening when President Ulysses S. Grant attended the dedication ceremony as well as the first service.  It is believed that he was the first American president, or any major world leader at the time, to do so.  While no longer in use as a synagogue, the building is currently maintained as the Lilian and Albert Small Jewish Museum with exhibits on the Jewish community of Washington D.C.