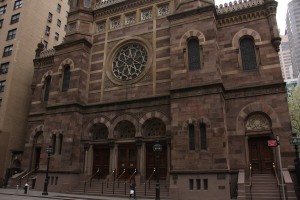 While Temple Emanuel and the Spanish & Portuguese Synagogue are New York’s marquee Jewish institutions, the city boasts many other synagogues, some much older and of great historic importance.  Many of these are concentrated in Manhattan, particularly Lower Manhattan, where countless Jewish immigrants settled in the second half of the 19th century.  While it is difficult to single out the best, there are a few particularly venerable institutions and building that stand out.  Among these are the Angel Orensanz Center and the Congregation Chasam Sopher synagogue, both in Lower Manhattan; and the Central Synagogue in Midtown.

The first significant waves of Jewish immigrants from Central Europe began arriving in New York in the first half of the 19th century.  Among the earliest congregations formed were Shearith Israel, B’nai Jeshurun and Ansche Chesed.  The latter congregation, mostly German Jews, acquired land on the Lower East Side where they built the Ansche Chesed Synagogue.  Completed in 1850, this building is still in existence and enjoys the distinction of being the oldest synagogue still in use in New York City. 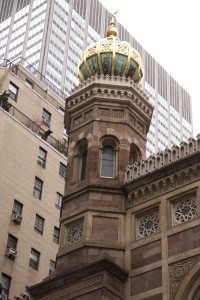 During the second half of the 19th century, immigration boomed, and the Jewish population of New York City swelled.  Many of the older congregations moved to newer buildings, and newer congregations were formed.  By the end of the American Civil War, the desire for a major synagogue was growing among the Jewish community, something grand that would be at home among the grand buildings of Midtown.  The result was New York’s Central Synagogue. 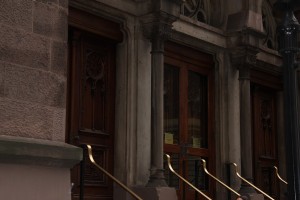 Central Synagogue in Midtown Manhattan was the most magnificent and beautiful synagogue yet built in the United States, and perhaps the most impressive synagogue anywhere outside of Europe.  Completed in 1872, it became one of the great centers of Reform Jewish worship as well as one of the preeminent centers of Jewish religious life in New York City.  It remained so until the construction of the Spanish and Portuguese Synagogue and Temple Emanuel a few decades later.

The Angel Orensanz Center (formerly Congregation Anshe Chesed) is not only New York’s oldest synagogue, it is, artistically speaking, the most unusual.  The building was acquired in 1986 by the Spanish artist Angel Orensanz, who turned the Gothic Revival building into a modern art canvas.  From the rainbow striped exterior to the multi-colored art-draped interior, the building, now known as the Angel Orensanz Center, is one of New York’s most famous art galleries.  A new congregation, the Shul of New York, was formed in 1997 and continues to use the site as a synagogue.  The Angel Orensanz Center is located on the Lower East Side of Manhattan, about one mile northeast of Downtown.  Web: www.orensanz.org (official website). 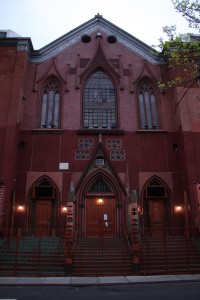 Congregation Chasam Sopher (formerly Congregation Rodeph Sholom) is New York’s second oldest synagogue, and the oldest that still essentially looks as it did at the time of its completion.  A red brick Romanesque Revival building completed in 1853, it was renovated in 2006.  The Chasam Sopher Symagogue is located on the Lower East Side of Manhattan, about one mile northeast of Downtown.  Web: http://chasamsopher.org (official website).

The Central Synagogue is one of the most beautiful religious edifices in New York City.  Completed in 1873, it was at one time one of the largest synagogues in the United States.  Inspired by the Dohany Street Synagogue in Budapest, the Central Synagogue is a Moorish Revival style masterpiece.  It would easily be at home among the medieval synagogues of Spain and Portugal.  The synagogue was partially damaged by a fire in the 1990s, with a full restoration taking place in 2001.  Central Synagogue is located in Midtown Manhattan a few blocks from the city’s religious megastars Temple Emanuel and St. Patrick’s Cathedral.  Web: www.centralsynagogue.org (official website). 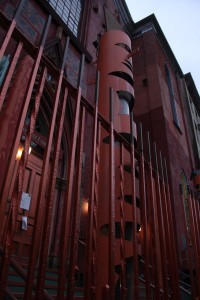 Many of New York’s oldest congregations have moved around over the years, leaving a trail of historic synagogues in their wake.  B’nai Jeshurun on the Upper West Side is another of Manhattan’s oldest congregations and synagogues.  After several moves, Congregation Rodeph Sholom also now occupies a site on the Upper West Side.  The Orthodox Congregation Talmud Torah Adereth El in Lower Midtown, while not in its original building, has been on the same site since the 1850s.