The Jewish communities of California are some of the oldest, largest and most historic in the United States. Large numbers of Jewish immigrants flooded into California beginning with the Gold Rush, and quickly grew into some of the most important congregations in the country outside of New York and a few other cities on the Eastern Seaboard. The half century from the 1880s to the 1920s was a golden age of synagogue construction in California, and some of the state’s most magnificent temples date from this period 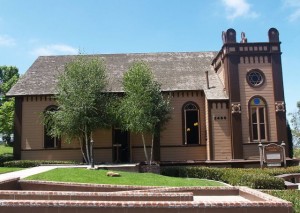 In 1889 they constructed the Temple Beth Israel. This was the congregation’s home for nearly four decades. Due to growing numbers, they constructed a new, larger synagogue and moved in 1926. However, the beautiful original synagogue was maintained, along with other historic buildings in what is now known as Heritage Park. Although not an active synagogue, it is still open most days and used for both public and private events. 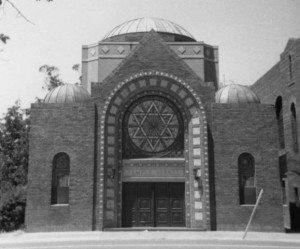 Temple Israel in Stockton may be the oldest Jewish Congregation in California and is one of the oldest west of the Mississippi. The congregation’s origin was in an organization named the Ryhim Ahovim, which consisted of Jews who traveled west in 1849 during the California Gold Rush. The first synagogue was constructed in 1855. It was relocated in 1861 due to the threat of flooding, and replaced by a new more permanent structure in 1905. 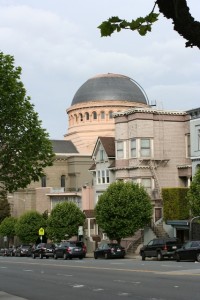 Congregation Sherith Israel is one of two Jewish congregations in San Francisco that were born out of the California Gold Rush. In 1849, small groups of Jewish immigrants, mostly from Germany, began arriving in the San Francisco area. These groups found each other, and formed a pre-congregation of sorts, possibly the first one in California (it is unknown if this group was predated by the one in Stockton). Initially these groups met and worshipped together, but in 1851 they formally established two different congregations using two different rites.

One group, largely from northeastern Germany, established the Congregation Sherith Israel. They constructed their first synagogue in 1854. Within a decade, the city’s Jewish population swelled, and so did the congregation. By the end of the 19th century a much larger synagogue was required, and in 1905 the new sanctuary was completed. At the time of its construction it was arguably the most magnificent synagogue in the United States, at least outside of New York City. 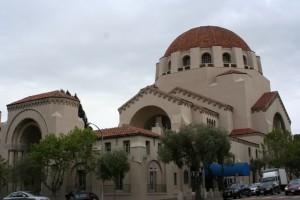 Congregation Emanu-El is the fraternal twin of nearby Congregation Sherith Israel. It was formed out of the same original group of Jews that came together to worship for the first time in 1849. Depending on who you ask, it may technically be the older of the two (did the congregation split down the middle, or did one break away from the other?) Emanu-El also built its first synagogue in the early 1850s just a few blocks away from its sibling.

The long standing friendly rivalry between the two congregations was highlighted in the early 20th century when Sherith Israel completed its magnificent new temple. With its own fast congregation, Emanu-El also needed a new building. Not to be outdone, the constructed an equally magnificent synagogue in 1926. 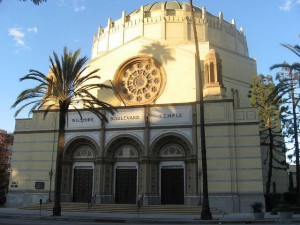 The Wilshire Boulevard Temple is the oldest synagogue in Los Angeles. Its congregation is also the oldest in Los Angeles, and can trace its roots to the first Jews how arrived in the area in 1851. The congregation was formally established in 1862, and they occupied several synagogues for over half a century. However, the Jewish community here boomed in the early 1900s with the rise of the movie industry, and a new synagogue was needed.

In 1928 the magnificent Wilshire Boulevard Temple was completed. A number of prominent members of the Hollywood community were its members and contributed to its construction, most notably the Warner Brothers, who sponsored the temple’s magnificent murals. Other contributors included Irving Thalberg and Louis Mayer of MGM Studios.