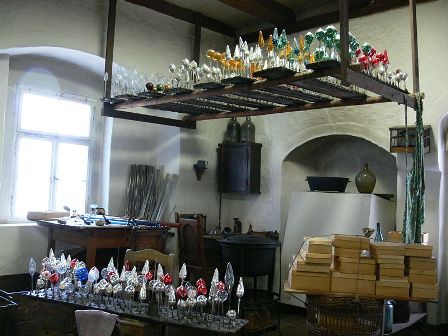 There are few things as evocative of the holiday season as the endless variety of Christmas decorations that festoon virtually every structure in the western world during the month of December.  Strings of lights, which originated at Thomas Edison’s workshops in New Jersey in the late 19th century, are a mainstay.

But what about everything else?  What about the ornaments, and nutcrackers dolls and Nativity scenes that appear every Christmas?  What is their origin, and where do they come from?  To go to the manufacturing source, check out these five Christmas destinations:

For nearly a century the town of Lauscha dominated the glass ornament industry.  Today there are less than two-dozen small glass ornament manufacturers in Lauscha, a mere shadow of the former industry.  However, this is more than enough to attract hundreds of thousands of visitors annually who come in search of Christmas treasures.  The most popular time of year to come is during the first two weeks of Advent, when the Christmas Ball Market is held.

With the advent of the popularity of glass Christmas ornaments, it is not surprising that Venice, home to the world’s most famous glassmakers, was soon involved.  By the late 19th century the production of Christmas ornaments became one of the most important niches of the Venetian glass industry.  During the holidays Venice’s major shopping thoroughfares are filled with windows absolutely packed with wonderful glass Christmas treasures, all locally produced on the nearby island of Murano.

The beautiful and rare glass productions of Murano were a holiday favorite as far back as the late Middle Ages.  Early glass Christmas gifts from Venice usually took the form of drinking vessels or trinkets.  True Christmas ornaments didn’t show up until the late 1800s, but the demand for these quickly skyrocketed.  Every year Murano erects the world’s largest glass Christmas tree.  In 2010 it weighed in at over three tons.  In addition to glass shops and some glassworks that may be open to visitors, Murano is home to a fascinating Museum of Glass Art.

What Lauscha is to Christmas tree ornaments, Marseilles is to the Creche, or Nativity display.  The artisans of Marseilles did not create the idea of a Nativity Scene.  That honor actually goes to Francis of Assisi, who organized the first living Nativity Scene in Greccio, Italy in the 13th century.  Nativities featuring elaborate statues and sets became increasingly popular during the Renaissance.  In the wake of the Protestant Reformation and the French Revolution, artisans in Provence in southern France began manufacturing miniature sets of Santons, or ceramic figurines, which could be set-up in private homes.

The first true miniature Nativity Scene is attributed to Jean-Louis Lagnel, a resident of Marseilles.  Lagnel’s work set the standard for Nativity Scenes produced in Provence.  Within a few years, many other artisans in Provence had taken up the creche manufacturing trade.  The region’s dominance in the production and sale of Nativity scenes was cemented in 1803 when the first Foire de Santonniers was held in Marseilles in order to encourage trade in the popular santons.  The Santonnier’s Fair still runs every year, usually from late December until early January, while the Museum de Santon is open year-round.

To children of all ages, Christmas is the time of year for the giving and receiving of toys; and no toy is as evocative of this beloved season as the Nutcracker doll.  Created by innovative woodcarvers in the rich forestlands of Central Germany, Nutcrackers have been around since at least as far back as the 16th century.  Designed to look like fanciful soldiers, kings, public figures and so forth, Nutcrackers became extremely popular in the 17th and 18th centuries.  By the 1800s, the city of Sonneberg was the definitive center for the manufacturing of Nutcracker dolls.

The business of making Nutcracker dolls is closely tied to the Steinbachs, a family of craftsman who had relocated to Germany from Austria during the turbulent 1600s.  Around the turn of the 18th century, the Steinbachs began making the wooden dolls that eventually became the industry standard.  After nearly three centuries the family is still in business, and maintains two factories in Germany.  The larger one is in Hohenhameln, and the smaller one can be found in the village of Gebirge outside of Marienberg.

Okay, so this one is not a workshop, but arguably merits inclusion in the list.

Many plants have come to be identified with the Christmas season.  Holly, ivy and mistletoe all evolved from the pagan traditions of Northern Europe to earn a beloved place in the holiday season.  But it was Southern Mexico that yielded the most colorful and popular Christmas plant of all: the spectacular Poinsettia.  Discovered by Spanish missionaries soon after their arrival in the New World, the brilliant red plant has since become a fixture in many churches and homes during the holiday season.

According to tradition, poinsettias were used by Franciscan priests during Christmas processions in Mexico as far back as the 16th century.  Sometime around 1828 the American ambassador to Mexico, Joel Poinsett, brought some of the plants back to the United States.  As they bloomed well at Christmastime, and were particularly festive looking, poinsettias soon caught on as a holiday decoration.  Taxco, about forty miles south of Mexico City, is one of the oldest cities in Mexico.  The Church of the former Monastery of San Bernardino de Siena is believed to be one of the very first churches ever to use poinsettias in its Christmas festivities.