The world is filled with literally thousands of religious architectural wonders. The date from the dawn of civilization to the modern age, and span nearly every culture that has existed throughout history.  But who was responsible for building all of these amazing places of worship?  In most cases it is a combination of a leader with deep faith, grand vision and deep pockets; and an architect of great talent.  Some of these, especially the latter, are forgotten, their names lost in time.  But some are remembered.  And some left their marks on the world so extensively that their achievements echo down through the ages. 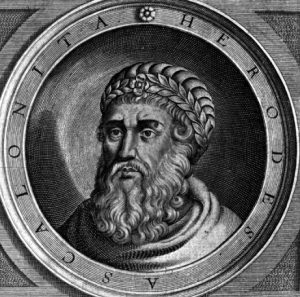 Herod I was the most powerful ruler of Judea during the Roman era.  Though a client king, he was a ruthless but effective ruler who poured his energies into remaking Judea a modern province of the empire.  History remembers him primarily for his tyrannical reign, not least for the slaughter of the innocents that took place shortly after the birth of Jesus of Nazareth.

That said, he was probably the greatest builder the Jewish people had seen since the time of Solomon a thousand years earlier.  Not much remains in Israel from the 1st century, but most of Judaism’s most sacred sites that survive from that period can be attributed to Herod.  First and foremost among his accomplishments was the complete reconstruction of the Great Temple.  What survives today, the Western Wall, is a retaining wall that Herod constructed.

Other accomplishments of Herod are the shrine of the Cave of the Patriarchs in Hebron where Abraham, Isaac and Jacob are buried; the Jerusalem Pilgrim Road; and the nearly indestructible Fortress at Masada, where the Jews made their last stand against the Romans and which is now regarded as one of the country’s most sacred sites.

Filippo Brunelleschi was the most accomplished and famous of the great architects of the Italian Renaissance, and one of the greatest civil engineers of the age.  Brunelleschi, who largely worked under the patronage of the Medici family, solved many engineering problems that later contributed to massive building projects across the continent of Europe.

Brunelleschi’s seminal achievement was the design and construction of the dome of Florence Cathedral.  The cathedral, which was already complete, still lacked a dome due to the construction limitations of the day.  Thanks to his brilliant skills as an engineer and mathematician, he figured out a way to construct a dome larger than any yet built (the largest since the dome of the Pantheon in Rome over a thousand years earlier).  For this he achieved great renown and became one of the father’s of the Renaissance.

Much of Brunelleschi’s later accomplishments were focused on military defense, but there are numerous churches credited to him.  Among these are a number in Florence including the Basilica of San Lorenzo, the Church of Santa Maria degli Angeli, the Basilica of Santo Spirito and the Pazzi Chapel.

Mimar Sinan (under Suleiman the Magnificent and others)

Mimar Sinan is among the most famous and accomplished architects in history.  His work has become the standard for Islamic religious construction for the better part of the last five centuries.  Sinan served under numerous sultans of the Ottoman Empire, and for much of his life was the chief architect and engineer of that massive realm.  He has often been compared to his contemporary Michelangelo in terms of his capabilities and achievements.

Sinan was active in the decades after the city of Constantinople had been conquered by the Ottomans (when it was renamed Istanbul).  Named the capital of the Ottoman Empire, many of Istanbul’s new public and religious buildings were designed by Sinan.  Most famous of these is the awe inspiring Suleymaniye Mosque, the massive dome and minarets of which have since dominated the city’s skyline.

A short list of his major mosques includes the Selimiye Mosque in Edirne which, while less famous than its counterpart in Istanbul, is considered his greatest work.  Others include the Rustem Pasha Mosque in Istanbul, the Banya Bashi Mosque in Sofia (Bulgaria), the Gazi Husrev-beg Mosque in Sarajevo (Bosnia) and the Ferhat Pasha Mosque in Banja Luka (Bosnia).  Sinan also oversaw renovations to the Masjid Al-Haram in Mecca in the 16th century.

Shah Jahan was one of the greatest emperors of the Mughal dynasty in India, ruling that sprawling realm right around the time that it reached its peak.  A devout Muslim, he was eager to spread both his empire and his faith, and fought numerous wars against neighboring states, as well as the first major war between Asian and European powers (Portugal).

During his reign he forcefully opposed the spread of Christianity and Hinduism, suppressing both, and in some cases destroying their holy places.  However, for the most part he was a builder, and devoted much of his energies to the creation of monumental mosques and related religious sites.  No doubt the most famous of these was the Taj Mahal, a grand mausoleum for his beloved wife, which doubled as a Muslim place of worship.

Over the course of his life, before he was imprisoned following a coup by his own son, Shah Jahan built some of the largest mosques in history, including the Jama Masjid in Delhi, the Wazir Khan Mosque in Lahore, the Moti Masjid as part of the Lahore Fort, the Mahabat Khan Mosque in Peshawar, and the Shah Jahan Mosque in Thatta.

Christopher Wren (under Charles II and others)

Christopher Wren is one of the most storied architects in English, and world, history.  One of the great scholars of the 17th century, he took up architecture in the 1660s.  Over the better part of six decades he went on to design and oversee the construction on hundreds of buildings, effectively laying the groundwork for the modern city of London.

Wren was already involved in the restoration of St. Paul’s Cathedral when the Great Fire of 1666 leveled almost all of London.  At news of the fire, Wren travelled to London and immediately helped to lay the plans for the rebuilding of the city.  His first major project was the construction of a brand new St. Paul’s Cathedral, the same building that today’s visitors to London are familiar with.

Under the patronage of the Stuarts (Charles II, James II, William III and Anne), Christopher Wren went on to oversee work on the reconstruction of over fifty churches in London (not to mention numerous palaces and public buildings).  Among those that have survived to the present day are St. Edmund King and Martyr Church, St. James Garlickhythe Church, St. Martin Ludgate Church, St. Peter upon Cornhill Church and the Chapel of the Royal Hospital at Chelsea.  He also worked on renovations of Westminster Abbey.