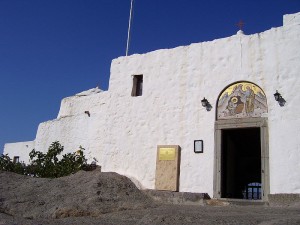 The Isle of Patmos in the Dodeconese Islands between Greece and Turkey has the honor of being the setting for the very last book of the Bible.  It was here, sometime towards the end of the 1st century AD, that John the Evangelist received the supreme vision of the apocalyptic end of the world and the final triumph of God’s eternal kingdom.  The Book of Revelation itself confirms Patmos as the site of John’s exile and vision.  The entire island has subsequently become something of a super-shrine to John, with monasteries and churches marking the various sites associated with his exile.  The Holy Grotto of the Apocalypse includes the cave where the prophecy of the final drama of world history was revealed to John.  It is one of the oldest regularly visited Christian shrines outside of the Holy Land.  The Holy Grotto of the Revelation is part of the Monastery of St. John the Theologian UNESCO World Heritage Site.

Patmos had long been inhabited by the Greeks and later the Romans for centuries before Christianity finally arrived.  However, by the 1st century AD, the island’s population was in serious decline, and Patmos was designated as a penal colony for criminals.  Later, as the threat of Christianity grew within the Roman Empire, Christians were also sent into exile on Patmos.  During the periodic savage, genocidal persecutions under Emperors such as those of Nero and Diocletian, slavery and exile were actually much more common sentences for Christians.  Such was the fate of John the Evangelist.

John, believed to be the last survivor of the original Twelve Apostles, was still actively evangelizing throughout Asia Minor even in his eighties.  Around 95 AD, the Roman authorities arrested him, probably in or near Ephesus, and sent him to Patmos, where he spent approximately eighteen months in exile.  While serving his sentence, the elderly John received what is undoubtedly the greatest, most terrible prophetic vision received by any figure in the Bible, including such Old Testament luminaries as Daniel and Isaiah.  In this vision, God laid out for John an extremely thorough, if somewhat confusing, future history of the end of times.  John recorded this vision in what would become the terrifying but gripping Book of Revelation.

Little is known of John for certain after this period.  It is possible that he also composed the Gospel of John while in exile here.  He almost certainly did not die on Patmos, but probably returned to Ephesus to continue his ministry.  The Book of Revelation suggests that John had yet to preach to many peoples and nations, and tradition suggests that he lived for perhaps another decade or so afterwards.  He likely died and was buried in Ephesus.  After his death, the tradition of John was maintained by the Christians of Patmos.  The island became a crown province of the Byzantine Empire after Constantine’s conversion to Christianity.  The surviving Greek and Roman temples were torn down, and churches and shrines were erected commemorating John’s life and exile.

Between the 6th and 12th centuries, Patmos and its rich pilgrimage sites were frequently raided by both Muslim and Christian mauraders.  For a time the isle was deserted.  Interest in Patmos returned during the 1600s, when the growing Christian community was permitted by the Ottomans to restore the island’s sacred places.  Most of the current churches and monasteries date from this period.  During the 19th century, Patmos was returned to Greek control.  The entire island, with a focus on the cities of Hora and Skala, underwent a Christian revival.  Because of its out-of-the-way location in solidly Orthodox territory, this important site is revered by Catholics but not frequently visited by pilgrims from the west.

It was documented that John spent his exile in a cave not too far from an ancient temple dedicated to the Greek goddess Artemis.  The site was later identified and renamed the Holy Grotto of the Revelation.  Sometime in the early 4th century the temple was torn down, later to be replaced by a shrine and finally a monastery.  The Monastery of the Apocalypse still stands, a brilliant white brick edifice upon a green tree-covered hillside.  This high-walled multi-terraced structure looks more like an ancient Greek palace, with virtually none of the traditional Christian religious touches on the exterior such as domes or steeples.  The entrance to the Holy Grotto of the Revelation is well guarded inside the monastery walls.

Near the heart of the monastery, there is an ancient, simple door crowned with a fresco of John the Apostle kneeling before Christ as he receives the vision of the Apocalypse.  Inside is the small cave, walled off at the mouth, where John lived.  The interior is sparsely decorated with a tiny shrine, golden chandalier and candelabra amd a few chairs.  A waist-high natural shelf in the cave serves as a makeshift altar draped in white.  According to tradition, this is the heart of the shrine, where John saw and recorded his visions.

The Monastery of the Apocalypse is located between the towns of Chora and Skala on the Isle of Patmos, approximately fifty miles southeast of the city of Kusadasi on the coast of Turkey.  The monastery is accessible from either of the nearby towns by public transportation or, for the truly intrepid pilgrim, on foot.  The Holy Grotto is open to visitors open daily from 8:00am-1:30pm (1:00pm on Sundays), with afternoon hours 2:00pm-6:00pm on Sundays, Tuesdays and Wednesdays.  There is no cost of admission.  Web: www.patmos-island.com (official website)

Patmos makes the most of its association with John the Evangelist and his writings.  In addition to the Holy Grotto of the Revelation, the island is also home to the 17th century Monastery of St. John the Theologian, whose grey walls tower over the white city of Hora.  The Tomb of John is supposedly located beneath the remains of the Basilica of St. John in nearby Ephesus, or Izmir, in Turkey.