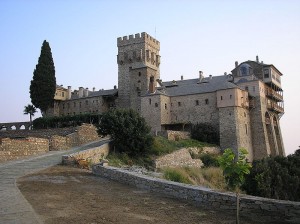 According to legend, the inhabitants of Mount Athos were converted to Christianity around the middle of the 1st century AD by the Virgin Mary herself.  The story says Mary discovered the beautiful mountainous peninsula during her journey to Ephesus, subsequently blessing Mount Athos and declaring it to be a haven for Christians.  Soon afterwards an earthquake leveled much of the surrounding area, including most of the pagan temples.  This prompted many of the locals to convert, and the area has been a Christian stronghold ever since.

Christian communities flourished at Mount Athos as early as the 4th century, and by the end of the 5th century were solidly in control of the area.  As Islam began making its way westward in the 7th century, monks and other Christians from the east began to relocate in large numbers to Mount Athos.  By the late 9th century the peninsula boasted such a large population of monks and hermits that in 885 the Byzantine emperor issued an edict declaring the place to be a Holy Mountain, for monastic use only.  Shortly afterward the non-monastic Christians of Mount Athos, who were fortunately few in number, were forced to relocate.

The first true monastery on Mount Athos, the Chelandariou Monstery, was built around this time, and was soon followed by the Megisti Lavra Monastery.  More followed, and eventually the whole area was put under the joint governance of the various orders under the centralized leadership of a First Monk.  Mount Athos continued to prosper for centuries, peaking just before the fall of Constaninople in the 15th century, when it is estimated that upwards of twenty thousand monks inhabited the peninsula’s monasteries.  In the year 1430, the Ottoman Empire conquered nearby Thessalonica, and the monks of Mount Athos prudently surrendered rather than suffer assault and potentially devastating occupation.  In exchange for heavy taxation, the monasteries were allowed to retain their autonomy.  The monks, though lessened in numbers, maintained their communities throughout five centuries of occupation.

After Greece won its independence from the Ottomans in the 19th century and even more after the collapse of the Ottoman Empire in 1918, Mount Athos experienced a renaissance of sorts.  Although it has yet to regain its former pre-Ottoman population, new arrivals of aesthetics, mostly from Slavic Europe, have reinvigorated the peninsula and its monasteries.  Today Mount Athos is the reigning champion of all Orthodox monastic communities, if not the greatest of any Christian denomination in the world.

Because of its inaccessibility and quasi-isolation, Mount Athos’ twenty monasteries are surrounded by beautiful, pristine wilderness.  Each monastery enjoys a unique setting, and architectural styles vary widely.  The chief monastery is Great Lavra, the oldest and largest on the peninsula.  Founded by the aesthetic Athanasios in the 10th century, the Great Lavra Monastery eventually grew into a small fortress.  More than a dozen towers grace the outer walls.  Every square inch of space is used, and even the walls and towers have been topped with a dizzying collection of additional buildings, halls and rooms.  The main religious sanctuary is the Church of St. Athanasios Athonite.  The place is packed with thirty-seven chapels as well.  Other highlights include the treasury, which contains a great wealth of art, artifacts and relics; and the library, which contains a large collection of medieval writings.

Of the twenty monastaries located on Mount Athos, one is Russian, one is Serbian and one is Bulgarian.  The remainder is Greek.  In addition to the Monastery of Great Lavra, the non-Greek institutions include the Russian St. Panteleimon Monastery and the Serbian Hilander Monastery, both founded in the 12th century; and the Bulgarian Zograf Monastery, which dates from the 10th century.  Among the more interesting of the other Greek monasteries are the Monastary of Philotheo and the Monastery of Vatopedi.

Although Mount Athos is only fifty miles east of Thessalonika, and barely more than a hundred miles from Istanbul by sea, it is surprisingly inaccessible and difficult to visit.  Access to the Mount Athos peninsula is strictly controlled, and permission to visit is required in advance from one of the monastic orders.  Moreover, absolutely no women are permitted on the mountain.  Visiting hours and any required admission donations are at the discretion of the resident monks.  Web:www.mountathos.org (official website of Mount Athos)

In addition to those listed above, Mount Athos is home to another fourteen monasteries.  For those who have not had their fill of Orthodox monasteries after visiting Mount Athos, the next stop should be Meteora, home to over two dozen more.