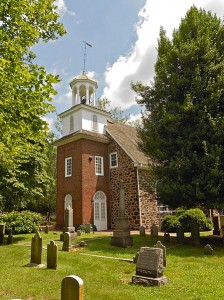 The Holy Trinity Church of Wilmington, also known as the Old Swedes Church, is the oldest Lutheran-built church still standing in the United States.  It may well also be the oldest American church in continuous use, or at least may be the oldest church still used as a church.  Although acquired by the Episcopal denomination in the late 18th century, it is still considered an historic landmark for American Lutherans, and is arguably the most important religious destination of interest in the state of Delaware.

In the 17th century, European powers were busy establishing colonies up and down the North American coast, including New France, New England and New Netherlands.  Almost forgotten among these was the colony of New Sweden, which was located along the Delaware River.  Founded in 1638, this was the first New World colony established by Lutherans.  It naturally became a draw for immigrants from Central Europe and Scandinavia.

While early Lutheran churches were constructed in the colony, none of these survived to the end of the century.  In 1655, New Sweden was conquered and absorbed into the New Netherlands colony under Peter Stuyvesant.  At that time it seemed as though the Swedish Lutheran Church would be dissolved in favor of the Dutch Reform Church.

However, barely a decade later, New Netherlands was in turn conquered by the British and absorbed into their expanding colonial empire.  Under the British, the Lutherans were allowed to maintain their religious freedom.  In 1698 they built the New Trinity Church in Wilmington on the site of the old burial ground of Fort Christina.

This became one of the pre-eminent Lutheran churches in the colonies, and remained so until the end of the Revolutionary War.  However, in 1791, New Trinity was acquired by the newly formed Episcopal Church, the American arm of the Church of England.  This congregation has been continually active in the years since.  Nevertheless it remains a favorite of local and visiting Lutherans as well.

New Trinity Church is one of the oldest churches, and one of the oldest brick buildings, still standing in the United States.  One of the most unusual features of the exterior is the church graveyard which surrounds the church on virtually all sides.  The church interior is typical of colonial church architecture, with an interesting standout: a brilliant, vibrantly colored stained glass window featuring the holy family, set amidst an otherwise almost completely whitewashed interior.

The grounds of the church, which was built on the site of an old Swedish colonial fort, include several other places of historic interest.  These include the centuries old church burial yard, meditative labyrinth and the Hendrickson House, a 17th century farm that was relocated to the site and is now run as a museum.

The New Trinity Church, which is more commonly known by locals as the Old Swedes Church, is located on the historic southeast side of Wilmington, approximately forty miles southwest of Philadelphia.  It is open March through December, Wednesdays through Saturdays from 10:00am-4:00pm (shorter hours in March).  The cost of admission is $4.00.  Web: www.oldswedes.org (official website).

Wilmington is home to several other beautiful old churches, most notably the 19th century Trinity Episcopal Church, which is run by the same parish organization as Holy Trinity.  Just across the border in Pennsylvania are two of the oldest Lutheran churches still active: the Gloria Dei Church in Philadelphia and the Augustus Lutheran Church in Trappe.