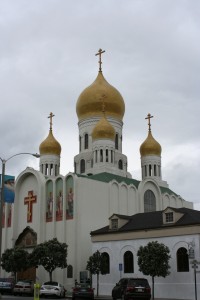 The Holy Virgin Cathedral is one of the few cathedrals of the Russian Orthodox Church located outside of Russia.  It is also one of the most prominent, and is the site of the tomb of John of Shanghai, the most important Russian Orthodox saint buried on American soil.  Although built in the latter half of the 20th century, it incorporates traditional Orthodox architectural styles, including towering onion domes, and is considered one of the more beautiful church buildings in San Francisco.  The Holy Virgin Cathedral is arguably the most important Eastern Orthodox pilgrimage destination on the West Coast of the United States.

The Russian Orthodox Church arrived on the Pacific coast of North America in during the 18th century.  After becoming established in the Alaska Territory, Russian settlers slowly worked their way southwards, bringing the church with them.  Orthodox Christianity arrived in California in 1812, around the time American settlers were beginning to arrive from the east. 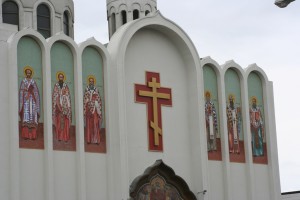 In 1896, Mikhail Borisovich Maximovitch was born in the Ukraine.  In early adulthood he devoted his life to the Church, becoming a monk in 1926.  Following his ordination, he travelled to Shanghai where he served as a missionary for twenty years.  In 1946 he was ordained Orthodox Bishop of Shanghai, but was forced to flee after the Chinese Revolution.  He then went to work in Western Europe, where he compiled histories of the lives of the saints.

In 1961, the growing Orthodox Church in San Francisco, now a century and a half old, began construction on its first cathedral.  The next year, Maximovitch was assigned to San Francisco as bishop, where he spent the final years of his life.  Among his works there was the completion of the cathedral and the great strengthening of the Church in California. 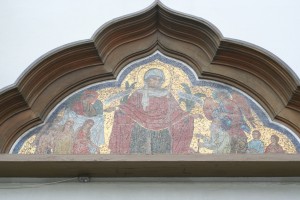 Maximovitch died in 1962 while on a trip to Seattle.  His relics were buried on the site of the Holy Virgin Cathedral, which he was so instrumental in completing.  A few years later he was canonized under the name Saint John of Shanghai and San Francisco.  The cathedral and his shrine have subsequently become the most important Orthodox pilgrimage site west of the Mississippi.

Holy Virgin Cathedral is one of the architectural gems of the Orthodox Church in America.  It’s bell towers, crowned with five iconic yellow onion domes covered in gold leaf, is an indelible part of the San Francisco religious architecture scene.  Beautiful frescoes of a half dozen saints adorn the façade of the cathedral facing the street. 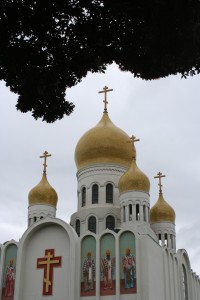 The interior of the cathedral is spectacularly decorated in the traditional Orthodox way, adorned with paintings and icons.  The tomb of Saint John of Shanghai and San Francisco is located within the walls of the cathedral

Holy Virgin Cathedral is located in the Richmond District of San Francisco, approximately four miles west of downtown.  Access to the interior is limited as the church is only open to the public during worship services.  Web: http://sfobor.com (official website). 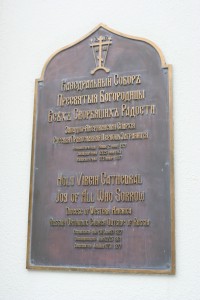 San Francisco is home to a thriving Eastern Orthodox population, and boasts two of the more important Orthodox schools on the West Coast, the Saint John of San Francisco Orthodox Academy and the Patriarch Athenagoras Orthodox Institute at nearby Berkeley.