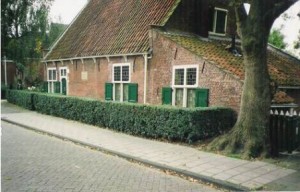 Baruch Spinoza is regarded by many to have been the first great Jewish intellectual of the Modern Age.  His philosophical ideas and writings were among the most important of his day, and he is credited by both Jews and non-Jews as having been a key figure of the beginning of the Enlightenment.  Ironically, his teachings also challenged established Jewish dogma of the period, and as a result Spinoza was probably the most famous person ever to have been excommunicated from Judaism.  Baruch Spinoza is regarded as a national hero of the Netherlands, and while he is technically still in a state of excommunication, modern-day Jews have come to see him in a much more positive light.  Both his former home in Rijnsburg and his gravesite in the Hague receive many visitors every year.

Baruch Spinoza was a Sephardic Jew whose family fled to the Netherlands from the turmoil in Iberia in the early 16th century.  Originally Marranos, Jews who mascaraded as Christians, the family settled in the Netherlands in 1615 AD where they openly reverted to Judaism.  Baruch was born in 1632 in Amsterdam, where he was given a traditional Jewish upbringing and education.  However, his intellectual and philosophical interests led him to pursue a career that lay outside of both the family business and traditional Jewish scholarship.

Spinoza took up lensmaking probably in his teen years, and pursued this as his official trade for the rest of his life.  Unofficially, his true calling was as a philosopher and writer, and it was for these that he attained both fame and notoriety among the Jews of the Netherlands.  By his early twenties his writings were already well known in Amsterdam, both among Jews and non-Jews.  However, many of the conclusions of his writings were provocative to both Judaism and Christianity.  Despite warnings from Jewish and civic leaders, Spinoza continued with his work, and at the age of twenty-four he was issued a Writ of Cherem, the Jewish equivalent of excommunication.

This apparently made little impression on Spinoza, who diligently continued to expound on his ideas.  He went to study with Franciscus van den Enden, a famous philosopher and atheist of the day, and became aquainted with other contemporary thinkers around Europe, such as Gottfried Liebniz.  His writings became famous throughout Western Europe in his day.  Despite his fame, Spinoza lived a simple existence.  Other than a short career in public life, he maintained himself on the proceeds of his lensmaking business.  As well known as he was at the time of his death, it was not yet imagined how immense the impact his ideas would have as the Age of Enlightenment dawned.

As is true with most philosophers, the main drive of Baruch Spinoza’s work was on the meaning and nature of life.  He also concerned himself with ethics, which was the topic of one of his most famous essays.  His views on the oneness of God, the universe and nature were extremely controversial at the time, and are what got him into trouble.  It is noteworthy to mention that the Cherem that he received may have simply been an attempt by Jewish leaders to appease local Christians.  Spinoza’s work is considered an integral part of Enlightenment thinking.  Well respected by his contemporaries, his ideas were influential to such disparate men as Karl Marx, Friedrich Nietzsche, Sigmund Freud and Albert Einstein.  He is highly regarded in the present-day Netherlands.

The home where Baruch Spinoza spent much of his later life in Rijnsburg, the Netherlands is still standing and has been preserved as an historic site.  The house, which is now run as a museum, looks much the same as it did in the 17th century when the philosopher resided there.  The rooms have been restored as best as possible to reflect Spinoza’s tenancy.  Of most interest is the study, where some of Spinoza’s personal library is on display.

Because of his excommunicate status, Baruch Spinoza could not be buried in a Jewish graveyard.  He was interred instead in Nieuwe Kerk graveyard in The Hague.  His gravesite is marked by a simple white memorial stone.

The Nieuwe Kerk, or New Church, is located in the heart of the city of The Hague, approximately twenty-five miles southwest of Amsterdam.  The church graveyard where Baruch Spinoza is buried is an open site.  The Spinoza house and museum in Rijnsburg is currently closed for renovations.  No other visitor information was available at the time of this writing.  Web: www.spinozahuis.com (official website)

There are no other related sites.