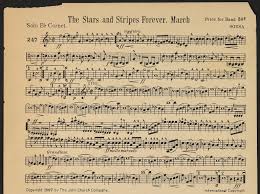 The military history of America has many great traditions, but few permeate the lives of day to day Americans the way that military music does. Some of America’s greatest composers and lyricists have contributed to the genre, from poets like Francis Scott Key and Julia Ward Howe to full time musicians like John Phillip Sousa.  Their music is both inspirational and timeless, and finds a regular audience every year, especially on and around Independence Day.  So in honor of their work and contribution to Americana, here are five of America’s greatest military songwriters:

The “Star Spangled Banner”, the national anthem of the United States, is not technically a military song.  However, it was inspired and written during a battle of the War of 1812, and has distinctly martial overtones.  Because of this it is usually the very first piece that every military band member learns and plays.  Set to an earlier tune written by John Stafford Smith in the 18th century, the “Star Spangled Banner” immortalized its lyricist, Francis Scott Key.

Francis Scott Key was a prominent early citizen of Baltimore.  A lawyer, Key was chosen to negotiate a prisoner exchange with the British in 1814.  During his mission, he was briefly detained onboard the British ship HMS Tonnant, from which he witnessed the naval bombardment of Fort McHenry.  The fort famously endured the attack, and Key went on to write his famous song in tribute to the heroic defense.

Ft. McHenry was constructed towards the end of the Napoleanic era, when artillery was becoming too powerful for masonry fortifications to withstand.  Because it was used for a variety of purposes up until the middle of the 20th century, Fort McHenry has been fairly well preserved.  The fort’s museum boasts a collection of famous American flags, including the enormous original “Star Spangled Banner” flag.

The “Star Spangled Banner” became a national hit in the 19th century, though it was not officially adopted as the national anthem until 1931.  Key became a distinguished member of the Baltimore community.  He died in 1843.  A monument was erected in his memory in Baltimore in 1911.  He is buried in the Mount Olivet Cemetery.

While America’s national anthem is the “Star Spangled Banner”, and its national march is “Stars and Stripes Forever”, when the troops head out to battle, it is usually to the tune of the “Battle Hymn of the Republic”.  This song, written in 1861 by Julia Ward Howe, was conceived to inspire the Union army as they marched off to war to destroy the institution of slavery.  It remains a popular wartime tune (and occasional church hymn) to this day.

Julia Ward Howe was born into a prominent New York City family in 1819.  She spent most of her adult life pursuing the advancement of social justice, especially abolitionism.  In 1861 she and her husband visited the Lincolns at the White House, she was inspired to write the lyrics to the “Battle Hymn of the Republic” set to the then popular tune of “John Brown’s Body”.  The lyrics were subsequently published in Harper’s Weekly.

The song became wildly popular and the de-facto anthem of the Union army during throughout the Civil War.  It has continued to be a popular wartime piece ever since.  It was performed before Congress in the days following the attacks on 9/11.  In 1970, Howe was inducted into the Songwriter’s Hall of Fame.  She died in 1910 and was buried in the Mount Auburn Cemetery in Cambridge, Massachusetts.

“Stars and Stripes Forever” is one of the best known military marches on Earth.  Written in 1896, it has served as the national march of the United States since 1987.  It has immortalized its composer, John Philip Sousa, as one of America’s greatest musicians.  Sousa, who wrote dozens of marches in his lifetime, served for a time as the leader of the United States Marine Corps Band.

Sousa was born in 1854.  He worked as an apprentice with the Marine Corps band as early as the age of 13.  His musical career spanned most of his life.  His military compositions included most of the major military marches in use today, including “Semper Fidelis” and “The Liberty Bell”.

“Stars and Stripes Forever” was Sousa’s definitive work.  It was composed in 1896, and he conducted it thousands of times on tours in the United States and Europe.  John Philip Sousa died in 1932 and was buried in the Congressional Cemetery in Washington DC.  Also in Washington is the Sousa birthplace on G Street, which is still owned by a member of the Marine Corps Band.

The George M. Cohan Monument is one of the best known statues in New York City, even though many people in the 21st century are unfamiliar with this great American composer.  Standing in the very center of Times Square, hundreds of thousands of passers-by see the statue on a daily basis.  Best known for his work on Broadway, Cohan also composed some of the most popular wartime songs ever written, for which he was later awarded a Congressional Medal of Honor.

George Cohan was born into a show business family and was raised working in vaudeville.  He made a name for himself as a writer, producer and actor on Broadway.  His first major hit show, Little Johnny Jones, featured the song “Yankee Doodle Dandy”.  This established him as a major composer of Americana.

Among his later works were the marches “Grand Old Flag” and “Over There”, which became the soundtrack for the American Expeditionary Force fighting in Europe during World War I. In recognition of his patriotic efforts Cohan was awarded the Congressional Medal of Honor in 1936.  Cohan died in 1942 and was buried in Woodlawn Cemetery in the Bronx.

Because of his close association with both Broadway and with the American war effort, the city of New York erected a bronze statue to Cohan in the heart of Times Square (technically the statue is in Duffy Square, which is adjacent to Times Square).  A monument honoring Father Francis Duffy, a highly decorated World War I chaplain, also stands in the square.

World War II saw a flowering of American military music associated with the Big Band movement that started a few decades earlier.  Many Big Band composers contributed, but none as much as Glenn Miller, arguably the greatest band leader of the era.  Miller was not only the definitive big band leader of the 1940s, he also had a distinguished military career with the United States Air Corps which unfortunately ended in tragedy.

Glenn Miller was born in Iowa in 1904.  He grew up learning music, and after a brief and unsuccessful stint in college decided to pursue music full time as a career.  He worked all over, including on Broadway and in Hollywood.  He formed his own band in the 1930s, at which time he composed some of his most famous hits.  During the war years he adapted many classical military tunes, most famously “American Patrol”, which became popular with the troops.

Miller served with the United States Army (and later Army Air Corps) as a musician, ultimately achieving the rank of captain.  On the night of December 15, 1944, while on a flight from England to France, Miller’s plane disappeared over the English Channel.  Neither the plane nor Miller’s body was ever recovered.  He is commemorated at the Glenn Miller Birthplace Museum in Clarinda, Iowa.