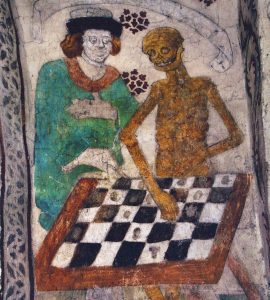 While researching the previous article, “Horror Movies Filmed in Churches”, it turns out that some of the best are not to be found in the United State, but rather over in Europe. Some of the greatest period horror movies ever made were filmed in Europe, spanning from silent classics to the modern era.  So, if you’re in Europe over Halloween, and are pining for a creepy church to visit, why not try one of these classics:

All Saints Church – “The Omen”

All Saints Church is the latest of several churches that have stood on this site since the 12th century.  The current building was completed in the late 1800s.  In 1976, it was the site of the filming of one of the most iconic scenes from the classic horror film “The Omen”.  In this scene, the local priest tries to give a warning about the imminent arrival of Satan.  This in turn incurs the devils wrath, who takes his anger out on the priest by impaling him with the lightning rod from the church’s roof.

St. Anne’s Church in Limehouse is an 18th century historical church with several claims to fame.  It was a prominent maritime gathering place in the 18th and 19th centuries, and houses a pipe organ that was recognized for its excellence at the Great Exhibition of 1851.  In 2002, the church was featured in a very famous scene from the movie “28 Days Later”.  During the scene, the film’s protagonist enters the church seeking safety (or at least answers) and is promptly attacked by an infected priest.  Graffiti in the stairwell sums up the situation nicely, “The End Is Extremely Fucking Nigh”.

The Taby Church outside of Stockholm is a 13th century church that is famous for its paintings by the renowned artist Albertus Pictor.  Pictor painted many church frescoes in the 15th and 16th centuries, relatively few of which have survived to the present day.  However one, “Death Playing Chess” in the Taby Church, not only survived, it went on to inspire one of the great philosophical horror films of all time, “The Seventh Seal”.  While it does not technically appear in the film, enthusiasts of the classic story do come to the church to ponder the famous painting.

Matthias Church is one of the great historic churches of Budapest. The first church on the site was built by King Stephen of Hungary in the 11th century and destroyed by the Mongols two hundred years later.  The current church dates from the 1400s.  In 1989, it was the filming location for a number of scenes from the movie “The Church”, in which a priest and several visitors are trapped inside a demon-ridden cathedral.  While destroyed in the film, the cathedral is one of Budapest’s most popular religious sites.

The Carta Monastery in the Tara Fagarasuliu region of Romania is one of the oldest surviving Benedictine monasteries in Eastern Europe. It has recently achieved major cultural status thanks to its appearance in the 2018 horror film, “The Nun”.  Actually set in the monastery, this sort-of sequel to The Conjuring movies features one of the creepiest ghosts to ever be depicted in film.  However, this entry is sort of a cheat, as the movie was actually filmed in the nearby Corvin Castle.  Both sites are likely to be popular tourist destinations in the future.