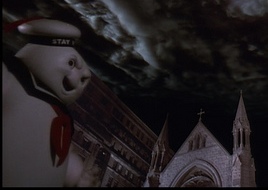 Considering that a ridiculous number of horror films have religious overtones, it is surprisingly difficult to find a lot of churches in the United States where such movies were filmed. This is especially true where interior shots are concerned.  But our fantastic staff (me) at The Complete Pilgrim managed to find a handful of pretty good ones.  Want to find a Hollywood-creepy church to visit on Halloween?  Try one of these:

Dahlgren Chapel is the campus chapel of Georgetown University in Washington DC.  Completed in 1893, this Catholic church stands at the heart of the campus, and is home to the tombs of several members of the Dahlgren family.  It also briefly appeared in the 1973 classic horror film “The Exorcist”, where as the site of a desecration it was mentioned as a possible connection to the possession of the twelve year old girl Regan.  Although only minimally part of the film, students at Georgetown enjoy the notoriety of their chapel.

St. Augustine Church is home to the oldest Roman Catholic parish in Pennsylvania and one of the oldest in the United States.  Completed in 1847, it replaced an earlier church that was destroyed in the Nativist Riots of 1844.  It is perhaps for this reason that Haley Joel Osment saw dead people here in the wildly successful 1999 thriller “The Sixth Sense”.  Osment’s character was found hiding out on the balcony in this church in a desperate attempt to shield himself from the terrifying ghostly apparitions that sought him out.

Japanese Union Church is an old church building that was previously home to a Japanese congregation.  Completed in 1923, it witnessed a real life horror in the 1940s when members of the Japanese community were rounded up here in order to be shipped off to internment camps.  In 1987, it became the primary setting for one of that decade’s classic John Carpenter films: “Prince of Darkness”.  It was in the basement of this church that a physics professor and his students find a cylinder of what they think is anti-matter and accidentally free a demon.  Of course.

The St. Vincent de Paul Church is one of the oldest Catholic churches in Los Angeles.  Completed in 1925, this beautiful church, graced by palm trees, is befitting of the early days of Hollywood.  It has, in fact, been used on numerous occasions as a filming location.  In recent decades, it has appeared in several Apocalyptic movies, including “Constantine” and “End of Days”.  In the latter film, future California governor Arnold Schwarzenegger does battle with the Devil himself inside the walls of St. Vincent’s, laying waste to the place (at least virtually).  I think it would not surprise a lot of Conservative Christians if the Battle of Armegeddon did indeed start in Los Angeles.

Holy Trinity Lutheran Church is one of the massive, stately houses of worship that grace Central Park West on the Upper West Side of Manhattan.  Completed in 1904, it houses one of America’s oldest English-speaking Lutheran congregations.  In 1984, it found itself in the world spotlight thanks to its cameo appearance in one of the most popular movies of the decade, “Ghostbusters”.  After accidentally summoning a giant demonic marshmallow man, the heroes watch in dismay as the creature knocks over Holy Trinity Lutheran Church.  I know I’m kind of cheating on this one (it’s not really horror), but hey, I love this scene.