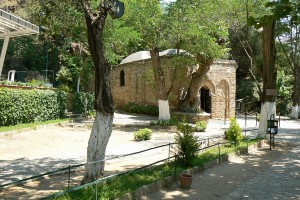 The city of Ephesus in western Asia Minor, one of the great metropolises of the Roman Empire, witnessed the final events of the lives of not one but two of the New Testament’s most pivotal figures: Mary, the Mother of Jesus; and John the Evangelist.  Little is known about the last days of these two most prominent Biblical personages, but their presence in Ephesus in the middle and later years of the 1st century AD made that city one of the first true Christian pilgrimage destinations.  According to tradition, many early patriarchs, bishops and other church leaders regularly visited Ephesus to meet with John, the last surviving Apostle.  Today, both Christian and Muslim visitors from all over the world come to venerate the humble residence in which Mary is said to have dwelt in her final years.  In recent decades, Ephesus has become a regular stop on the Christian pilgrimage trail in Turkey, especially in August when the Assumption of the Virgin Mary is celebrated.

During the early days of the Church, Ephesus was the seventh largest city in the Roman Empire, with as many as a half million residents.  It was one of the first major cities outside of the Holy Land mentioned in the New Testament, and it served as a missionary base for Paul in Western Asia Minor.  Ephesus was a great challenge for Paul and the early Christians due to the presence of the highly popular Temple of Artemis.  One of the original Seven Wonders of the World, the Temple was a great stronghold of pagan worship in the Roman Empire.  Paul’s letter to the Ephesians was included in the New Testament, and Ephesus is prominently mentioned in the Book of Revelation.

After the final departure of Jesus, Mary remained in the company of the Apostles in Judea.  Apparently she fled from Judea in her later years, seeking either peace, safety or both.  She went in the company of the Apostle John, who was charged by Jesus with her safe keeping.  Sometime around the middle of the 1st century they arrived in Ephesus, where she spent the rest of her life in John’s care.  There is no record of the place or time of her death.  Afterwards, John remained in western Asia Minor, alternating between his home in Ephesus and exile on the Isle of Patmos.  After the death of the Emperor Domitian in 96 AD he returned to Ephesus permanently where he spent the rest of his life.  He was the only one of the Twelve Apostles not to die as a martyr.

After the deaths of Mary and John, Ephesus remained an important organizational center of the early Christian movement.  It was not a patriarchal seat, which is strange considering the city’s size and John’s presence there, though its convenient location in the Christian heartlands of Asia Minor between Rome and Jerusalem made it a popular place for meetings.  Ephesus was the site of the third ecumenical council in 431, which was called to address the Nestorian Heresy.  It was at the Council of Ephesus that the Catholic Church essentially finalized its canon beliefs, reaffirmed the Nicaean Creed as being whole and complete, and outlawed the Nestorians, the last significant heretical movement of early Christianity.

Soon after the fall of the Western Roman Empire, the harbor of Ephesus silted up after centuries of efforts to keep it dredged.  By the end of the 6th century the harbor was a total loss, and most of the city was abandoned.  It is likely that a sizeable portion of the population relocated to Constantinople around this time.  For the next fourteen centuries, pilgrims visiting the city slowed to a trickle, although it is interesting to note that even after Ephesus fell into the possession of the Ottomans, the holy places associated with Mary continued to be venerated by the Muslims.  The House of Mary itself was forgotten for some time, until it was ‘rediscovered’ in the 19th century.  A shrine now stands on the site and is an active place of worship for both Christians and Muslims, and is famous as one of the few places on Earth where members of the two faiths hold joint religious worship services.

Perhaps because of its out-of-the-way location, the site of the House of the Virgin Mary was never overbuilt with a massive cathedral or mosque.  The small brown and grey brick shrine now appears today much as it has for centuries.  The building, about the size of a small modern house, incorporates the original 1st century dwelling as well as an expansion that encloses Mary’s Tomb.  Behind the house is the Well of Mary, and any visit to the shrine usually includes a drink of the curative waters.

The interior of the house has four rooms.  The bedroom is now used as a small Christian Chapel, and a sitting room has been converted into a small Muslim Chapel.  Parts of the house, including the kitchen, are in a state of severe disrepair and are off-limits to visitors.  The House of the Virgin Mary was officially declared to be a Catholic Shrine in the 19th century.

The House of the Virgin Mary is located at Mount Koressos just outside of the ruins of ancient Ephesus, about one hundred and eighty miles south of Istanbul.  Ephesus and the House of the Virgin Mary are out of the way for most visitors, but have become increasingly popular as many cruise ships stop in the area.  Pilgrims of all faiths are welcome to visit.  Catholic services are held daily at 7:15am (10:30am on Sundays), with major celebrations on August 15, the Feast of the Assumption of the Virgin Mary.  Cost of Admission is approximately US $1.50.  Web: www.ephesus.us (official tourism website of Ephesus)

Most of ancient Ephesus is now a ruin, and there is little in the modern town of any real interest.  However, not too far from Mary’s House is the Grotto of the Seven Sleepers, a cave where Christians came to hide from Roman persecutors.  The ruins of the Basilica of St. John are located in nearby Selcuk.  It is one of the possible burial sites of the Apostle.  Pilgrims can also visit the ruins of the Temple of Artemis, one of the seven original wonders of the world, where Paul once evangelized and challenged the pagan religious authorities.