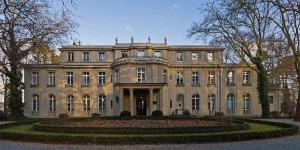 House of the Wannsee Conference (wikipedia.com)

The persecution and ostracization of the Jewish people was a keystone of the Nazi party platform from the moment of its inception, and these formally became public policy with the enactment of the Nuremberg Laws in 1935.  But it was not until 1942 that the terrifying idea of a ‘Final Solution to the Jewish Question’ was officially implemented.  On January 20, 1942, in a quiet, serene villa on the shores of the Wannsee outside of Berlin, Reinhard Heydrich convened a meeting of fifteen government officials of the Third Reich.  There, in a quiet, serene manner they casually discussed the annhilation of Europe’s Jews and others.  The villa is now a museum that explains what happened during that fateful meeting and its horrifying consequences for the ‘undesirable’ people of Europe.

By the beginning of 1942, the Nazis occupied virtually every corner of Europe.  This success had an ironic drawback.  It had always been the dream of the Nazis to rid their lands of the Jews.  But in the early years it had been their policy to merely drive the Jews out.  However, with Germany in control of the continent, there was effectively nowhere left to send them, so the Nazis were forced to seek other solutions.  A number of major officials of the Reich logically thought the best thing to do was to simply reduce the Jews to a state of slavery and put them to work supporting the war effort.  But Adolph Hitler wanted something more terrifying and permanent.

In July 1941, under the orders of Hermann Goering, Reinhard Heydrich began to make prepaprations for Hitler’s Final Solution.  A few months later, the deportation of the German Jews began.  When the first waves of Jews arrived in the east, those who were healthy were put to work, and the rest were shot outright.  However, this form of mass murder was insufficient for the Nazis.  First, the idea of shooting so many people was psychologically unappealing even to the most hardened Nazis.  And second, the war effort could not spare the ammunition.  Apparently, the life of a Jew was not even worth the cost of a bullet to Hitler’s henchmen.

These considerations, combined with developments of the war in the east, necessitated a reevaluation of the methods of the Final Solution.  Heydrich decided to convene a conference of high-ranking German officials from over a dozen major government departments to collectively discuss the issue.  These ranged from representatives of the military and SS to Reich Ministers, all of whom would have a role to play in the implementation of whatever was decided.  However, the ultimate purpose of the meeting was never debated; only the means to Hitler’s end.

The goal, of course, was to eliminate the Jewish population of Europe.  Since emigration was effectively impossible, that left only one option: genocide.  The general idea was to round up every Jew in Europe, ship them to the east and work them to death.  Those unfit to work, or those who survived a bit too long, would be put to death.  Within this framework, the participants of the Wannsee Conference merely had to discuss the details.  The meeting took less than two hours.  Three and half years later, six million Jews, and five million others, were dead.

The stately mansion on the shore of the placid Wannsee utterly belies the most evil of meetings that took place inside on that fateful January day in 1942.  The Wannsee district consists of several lakes located in the southwestern suburbs of Berlin, and it has been a favorite of German vacationers since the early 19th century.  The beautiful forest-shrouded lakes, famous for their wild swans, are a nature-lover’s paradise.

Numerous villas and vacation homes line the lake’s shore.  The property at 56 Am Grossen Wannsee, owned by the SS, had the dubious distinction of being selected to host the infamous conference.  Built in 1914, the beautiful mansion was erected at the very end of Germany’s imperial age.  The majority of the interior was reconstituted as a museum years after the war was over.  Among its displays are an original copy of the minutes, which escaped destruction in the final, hectic days of the Third Reich.

The town of Wannsee is a suburb of the city of Potsdam, approximately nine miles southwest of Downtown Berlin.  Despite this distance Wansee is accessible by public transportation.  The House of the Wannsee Conference Museum is open daily from 8:00am-6:00pm except on public holidays.  Admission is free.  Web: www.ghwk.de (official website)

Naturally, the Berlin area has a number of important Holocaust-related sites.  Most of these are located in the downtown area and are covered in the section under the New Synagogue.