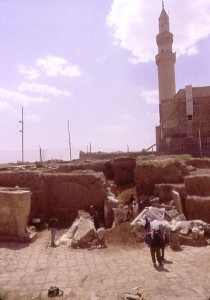 Mesopotamia, the heartland of the Middle East, is home to many sacred sites that predate the arrival of Islam in the 7th century.  Ancient synagogues and tombs of Biblical prophets can be found here, some of which can be traced as far back as the Babylonian Captivity; while monasteries, churches and other legacies of the Christian expansion eastward have been dated to the height of the Roman imperial era.

Today, dozens of these important historical and religious sites are severely threatened by the ongoing Syrian civil war as well as the growing menace of ISIS in Syria and Iraq.  One major religious site, the Shrine of the Prophet Younis, was already destroyed in recent days by ISIS militants.  This mosque, built amidst the ruins of Biblical Niniveh, was revered by Christians and Muslims alike as a possible burial site of the Prophet Jonah.  Its deliberate destruction is one of the greatest historic travesties since the Taliban’s dynamiting of the Bamiyan Buddhas in Afghanistan in 2001.

The civil war that has ravaged Syria since 2011 has swept through some of the oldest inhabited cities in the world.  In addition to the thousands of combatants and civilians who have been killed in the conflict, the war has laid waste to thousands of buildings which date back centuries, even millennia, including some of Christianity’s and Judaism’s oldest architectural treasures.

Aleppo in northern Syria has seen some of the fiercest fighting in the conflict.  One of the oldest trade centers in the Middle East, much of the historic city center has already been reduced to rubble.  Fortunately, the medieval Central Synagogue of Aleppo is as yet still standing.  This synagogue, which according to tradition was founded around 1000 BC by one of King David’s generals, was reconstructed in the 15th century, making it one of the world’s oldest active synagogues.  For over 500 years the Aleppo Codex, one of the oldest intact copies of the Hebrew Bible, was kept here, before being moved to Israel for safety.  Unfortunately, the magnificent Great Mosque of Aleppo was not so lucky.  Not too far from the synagogue, the mosque was badly damaged during the fighting, and its thousand-year-old minaret completely destroyed. 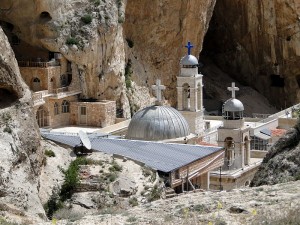 Ma’loula, an ancient town just north of Damascus, witnessed some less intensive combat, during which two of Christianity’s oldest monasteries were put in danger: the Mar Sarkis, named for the Roman soldier Sergius and home to one of the oldest surviving paintings of the Last Supper; and the Mar Thecla, named for Thecla, one of Christianity’s first female martyrs.  Although both locations were spared, twelve Orthodox Christian nuns from Ma’loula were taken hostage for several months.  Fortunately, these survived the ordeal and were later released.

On the Syrian-Iraqi frontier are the ruins of the Roman city of Dura Europos.  This little known historic jewel is right in the middle of the territory now controlled by ISIS, which has effectively declared war on any sacred site that they feel violates Sharia law.  In Dura Europas, this includes the remains of a synagogue and a church, both of which date from the 3rd century AD.  While neither of these buildings is intact, they have essentially been untouched for over 1700 years, and are thus archaeologically irreplaceable.  In particular, the Dura Europos House Church is home to the oldest known images of Jesus that have been discovered anywhere in the world to date, making the place a prime target for militants.

During the 6th century BC, large numbers of Jews lived in exile in what is now eastern Iraq and western Iran.  Some of the most prominent figures of the later books of the Hebrew Bible are believed to be buried in the region.  One tomb outside of Mosul, long revered as a possible burial site of the Prophet Daniel, has already been destroyed.  Fortunately, the more likely site of Daniel’s tomb is in the city of Shush, safe in Iran (despite current Jewish-Iranian relations, Iran has traditionally respected Biblical sites, which includes the tomb of Ester in the city of Hamadan). 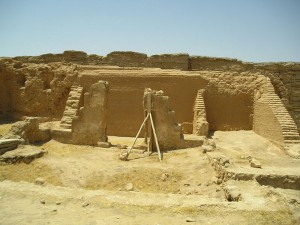 While still outside of ISIS territory, Ezekiel’s Tomb in the city of Al Kifl in Iraq is certainly less safe.  This sacred shrine was once the heart of Iraq’s Jewish community which dated back thousands of years.  Although most of the Jews left in the mid-20th century, the tomb has since been preserved by the local Muslim community.  It is fortunately beyond the reach of both conflicts, at least for the moment.

Both Syria and Iraq are home to many more such historic religious sites: the Tomb of John the Baptist and the Chapel of Ananias in Damascus; the Pillar of St. Simeon Stylites outside of Aleppo; and a possible tomb of the Hebrew Prophet Ezra in southern Iraq, just to name a few.  For over thirteen centuries such sacred places were largely respected, and often revered, by the local Muslim populations.  Sadly, this tradition of forbearance is breaking down throughout Mesopotamia: by accidental collateral destruction in the west and by the deliberate, thoughtless efforts of a handful of extremists in the east.

And it doesn’t seem as though there will be a respite on either front anytime soon.