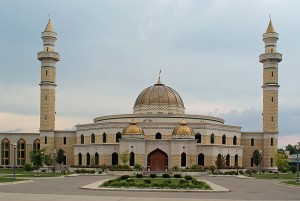 The Islamic Center of America is the oldest Shi’ite mosque in the United States, and since 1964 the largest mosque in the Western Hemisphere.  Its construction has been both a source of pride to Shi’ite Muslims in America as well as a source of tension between Shi’ites and Sunnis.  The fact that the Islamic Center of America is larger than the Islamic Center of Washington, a Sunni institution, has occasionally made it a target of religious tensions.  Nevertheless it is one the most beautiful mosques in the New World and arguably the most impressive religious building in the state of Michigan.

Although there have been Muslims in America since the colonial era, those of the Shi’ite faith did not begin to arrive in significant numbers until the 19th century, though available information prior to this time is sketchy.  Larger numbers began to immigrate to the United States after World War I and the collapse of the Ottoman Empire.

By the 1960s, the American Shia community numbered over a hundred thousand, but these were culturally lost among the larger and better represented Sunni population.  So in 1964 the Islamic Center was founded in Dearborne, home to a large Shia community, as an alternative to having to worship in Sunni mosques.

Dearborne was already home to a Sunni mosque, the second oldest mosque in the United States.  Despite problems between the two groups in the Middle East, relations between the two groups here were more or less on neutral ground in Michigan.  By the 1990s, the Shi’ite population had grown so large that a massive new mosque was planned.  When it was completed and consecrated in 2005, it was the largest mosque in the Americas.  This was regarded as a cultural threat by some Sunnis.

In 2007 the Islamic Center of America was vandalized by graffiti; and in 2011 it was the target of a bomb plot.  In both cases the perpetrators were believed to be Sunnis.  In 2011 the mosque was also the site of a planned protest against Islam by Terry Jones; however, the protest was thwarted by Muslim, Christian and Jewish counter-protestors.  Today the center is the heart of Shi’ite Islam in America, but concerns linger that it may be a target again in the future.

The Islamic Center of America is a sprawling complex, with educational and community facilities and a massive mosque at its center.  Architecturally it is a traditional layout crowned by a large dome and flanked by a pair of octagonal minarets.  The brickwork and details are more modern and American in style, and the adjoining building with additional facilities is more along the lines of typical church buildout of postwar era.

The mosque interior is a wide open, somewhat plain space which is a down-to-business worship area.  However, the ceiling is magnificent and highly ornate, decorated in traditional Muslim artistic styles, especially within the dome.  The entire room is lit with enormous chandaliers.

The Islamic Center of America is located just west of Dearborne approximately seven miles west of downtown Detroit.  The mosque is open every day, though there are visitor restrictions at worship times.  As of this writing no other specific visitor information was available.  Web: www.icofa.com (official website).

Dearborne is home to another of America’s most important Muslim institutions: the Dearborn Mosque, the second oldest active mosque in the country, dating from 1937.  This was the first mosque in America to allow the call to prayer to be broadcast over loudspeakers.